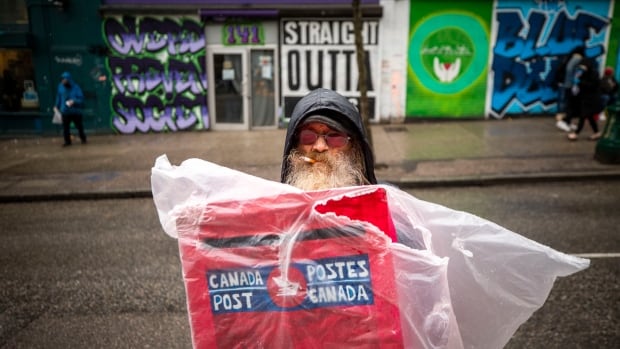 No mail deliveries had been made between the 0 and 100 blocks of East Hastings Street, the area between Carrall Street and Main Street, from March 23.

The corporation had said postal staff had “health and safety concerns” about making deliveries in the area, and an email shared with CBC News by a resident said deliveries were halted in mid-March because staff had faced “verbal attacks and drug use”. “

Affected residents were asked to pick up their mail at a Canada Post facility 14 blocks away at 333 Woodland Drive, then open 10 a.m. to 2 p.m. PT Monday through Friday.

But now, delivery operations will resume in the area on a temporary basis from Tuesday through Friday, according to a Canada Post spokesperson. The spokesman did not say whether the delivery would continue beyond that.

“We are also extending the hours of the Woodland Drive postal facility, which will be open from 10 am to 6 pm to help residents pick up any mail they may need,” said spokesman Phil Legault.

“These measures are in place while we seek a more permanent solution to continue [to] provide the service in a consistent and safe manner.

‘The mail is a human right,’ says activist

At a rally Tuesday, Downtown Eastside residents and advocates gathered at the intersection of Hastings Street and Main Street to protest the suspension of mail delivery in their neighborhood. Area residents have grappled with a variety of overlapping issues for years, including poverty, homelessness, and the drug intoxication crisis.

Advocates also said the suspension jeopardizes the health and safety of those who rely on the mail for paychecks and social and disability assistance.

“It’s unconscionable. The mail is a human right,” said Hannah Dempsey, a community organizer with the Vancouver Area Network of Drug Users.

Dempsey says the mail collection center on Woodland Drive, which is 14 blocks from the heart of the neighborhood at Hastings and Main, was too far away for residents, as some of them have mobility issues.

But that presents a significant barrier for many residents, including those with mobility issues, says Elsa Boyd, who is part of the advocacy group Our Homes Can’t Wait.

The Charter of Rights and Freedoms and the Canadian Human Rights Act are meant to protect people with disabilities from discrimination, Boyd said, adding that the suspension has affected between 550 and 600 residents.

“I really can’t think of another place in the city where an incident could result in another 600 people having their mail cut off,” he says. “There has been no incident that we are aware of.”

Dempsey says many residents only found out through the media that deliveries were suspended a few weeks ago, and that has left some of them scrambling to find options.

Being the last week of the month “week of checks” — the day disability and housing assistance payments are mailed in BC — Dempsey says the decision left many residents without answers.

“I’m glad to hear that the mail is starting again, but I think this is a larger pattern of a war on the poor in the Downtown Eastside, and it needs to stop,” Dempsey said.

The Canadian Postal Workers Union did not immediately respond to a request for more information about the security issues.

Boyd says Our Homes Can’t Wait members, which include residents and supporters of the Downtown Eastside, recently met with union representatives and hope to work with the union to find a solution.

When Canada Post suspended mail delivery to the neighborhood in 2020 over COVID-19 concerns, Boyd says the union pushed to figure out how to resume service.

“They said that daily mail delivery is a human right and that we need to get it back in the Downtown Eastside, and they were able to help us reverse that decision,” Boyd says of the suspension in the early days of the pandemic.