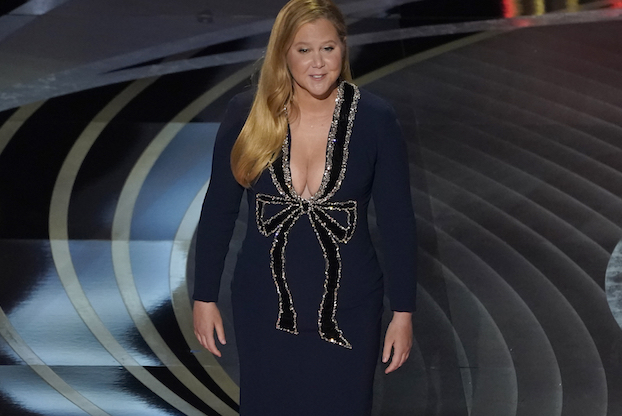 Amy Schumer’s list of celeb targets at the Oscars was initially much longer.

At a Las Vegas standup show on Saturday, the ABC telecast’s co-host revealed (per Vanity Fair) that she ended up cutting a number of jokes from her monologue under the advice of her lawyers. She then proceeded to share one of those excised quips with the audience.

“Don’t Look Up is the name of a movie? More like don’t look down the barrel of Alec Baldwin’s shotgun,” she reportedly said. Schumer was also apparently poised to take aim at Joe Rogan and James Franco, the later of whom has been beset by sexual misconduct allegations, but “I wasn’t allowed to say any of that [at the Oscars],” she maintained, before cracking, “But you can just come up and [slap] someone.”

Prior to her Vegas show, Schumer admitted on social media last week that the aforementioned slap left her “triggered and traumatized,” adding, “I love my friend Chris Rock and believe he handled it like a pro. He stayed up there and gave an Oscar to his friend from him Questlove and the whole thing was so disturbing. So much pain in Will Smith… Anyway I’m still in shock and stunned and sad. Im proud of myself and my cohosts. But yeah. Waiting for this sickening feeling to go away from what we all witnessed.”