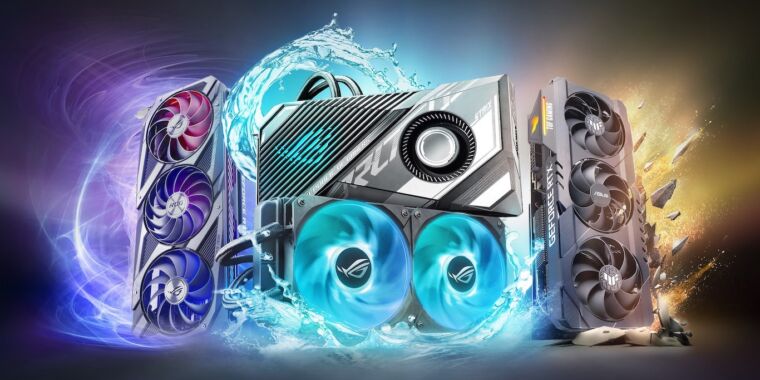 Early last year, graphics card makers like Asus announced they would be raising prices amid an intensifying GPU shortage. This price hike was partly a result of tariffs imposed on some Chinese products by the Trump administration; the tariffs had been waived for several years but were allowed to go into effect at the end of 2020. Last week, the Biden administration reinstated many of those waivers, and Asus announced Monday that the company would lower its GPU prices as a result.

The price drops will go into effect on April 1 and will apply to the company’s entire lineup of GeForce RTX 3000-series GPUs, including the 3050, 3060, 3070, 3080, and 3090 series cards. “Consumers should expect prices to decline up to 25% on different models throughout the springtime,” Asus said in a statement.

Asus and other GPU makers have revived (or simply continued selling) many older GPU models—including the RTX 2060 and 1660 and the GTX 1050 Ti—to try to address the ongoing GPU shortage. There’s no word on whether we can also expect to see price reductions for these models or if they’ll eventually go away as the availability of newer GPUs improves.

Manufacturer suggested pricing is just one factor that determines the actual street price of a graphics card, but Asus lowering its MSRPs is a positive sign for anyone who wants to buy a decent GPU for less than $500. Scalpers, cryptocurrency miners, and the underlying global chip shortage and supply chain problems will all conspire to keep GPU prices abnormally high in the short term. But the street prices of GPUs have been steadily declining so far this year, so it’s possible that the worst of the GPU shortage is behind us.

We’ve contacted representatives from Gigabyte, MSI, EVGA, and PNY to see if they will also be reducing the MSRP for their GPUs and will update this article if we receive a response. The tariff exemptions will be “in place through the end of 2022,” according to The New York Times, and if they’re allowed to expire again, prices will presumably go back up.