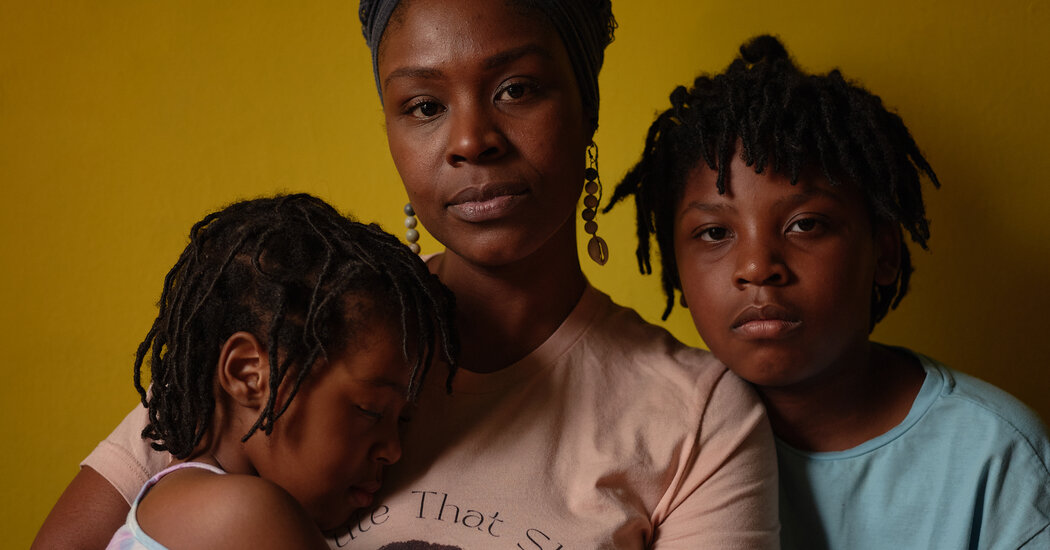 Many nights, after a long day of home-schooling two of her children, Tamykah Anthony is standing over the stove, cooking up natural beauty products in her kitchen at Queensbridge Houses, the biggest public housing complex in New York City.

Fueled by a lifelong interest in science, she began formally selling the products in 2017, hoping to provide financial stability for her family. Now, after her business from Ella, Xanthines All Natural Products, survived the roller coaster of the past two years, Ms. Anthony, 36, is considering looking for factory space.

“I know people who sell food that should be in five-star restaurants,” Ms. Anthony said, referring to her neighbors at Queensbridge, in Long Island City. “I know people who can put tiles down. I know hairstylists. But that transition from being really great at something to having a business, there’s a huge gap there.”

As New York City officials grapple with how to ensure an equitable economic recovery from the pandemic, a new report this week from the Center for an Urban Future, a nonprofit organization, highlights what the group has described as an urgent need to support the hundreds of entrepreneurs like Ms. Anthony who live in public housing.

Buildings managed by the New York City Housing Authority, which operates the country’s largest public housing system, are home to more than 266,000 adults, many of whom are increasingly making money from homegrown businesses.

These informal and unregistered businesses are often either a main source of income for them or a supplement to a full-time job. In the lobby of the Mitchel Houses in the South Bronx, fliers posted by residents advertise side hustles like eyelash extensions and hair braiding.

In New York City, the economic fallout of the pandemic has spurred a turn to entrepreneurship as an alternative to jobs that may not return for years, the new report said.

Nearly one quarter of NYCHA residents worked in industries that have been among the slowest to recover, including hotels, retail stores and restaurants. And advocates estimate the unemployment rate among residents is around 25 to 35 percent, compared with 7 percent citywide.

But the report revealed that New York City’s small business assistance programs have been unsuccessful at reaching a large swath of residents living in NYCHA housing, where the average family income is around $25,000.

“This may be the biggest untapped entrepreneurial opportunity in the city,” said Jonathan Bowles, executive director of the Center for an Urban Future.

NYCHA’s existing training program for entrepreneurship focuses only on catering and child care businesses, excluding all other industries. And the program has limited capacity, the report said, with hundreds more applicants than available seats.

A spokesman for the city’s Department of Small Business Services said those sectors were chosen for their growth and their comparatively lower barriers to entry.

Last year, about 1,600 NYCHA residents reported owning their own businesses — less than 1 percent of the total population of NYCHA residents, but still five times more than in 2012, the report said.

The heightened interest in entrepreneurship mirrors a national start-up boom during the pandemic. In 2020, Americans filed paperwork to start about 4.3 million businesses, census data showed, the highest figure in the decade and a half that the government has kept track. New business applications were even higher in 2021.

Many were started out of necessity by people who had been laid off from their jobs, while others simply realized that they wanted to be their own boss.

Before Ms. Anthony became an entrepreneur, she bounced from job to job. For two years, she worked from 3 pm to 11 pm at a store inside Madison Square Garden, then rushed to La Guardia Airport to work a midnight shift at a rental car desk.

She wanted to become a scientist and eventually enrolled at John Jay College of Criminal Justice, graduating with a degree in forensic toxicology. But she faced a major setback in 2015 when she was diagnosed with a rare eye condition that blurred her vision of her, crushing her motivation to pursue lab internships.

With money running low, Ms. Anthony turned her hobbies into full-time pursuits. She offered pop-up science classes to children in Brooklyn and Queens. She researched how to make deodorant and toothpaste at home, selling them to local residents.

During the pandemic, her business benefited from a surge in online orders for her homemade elderberry gummies, from people searching for foods that they believed boosted immunity. Last year, she also became a yoga instructor and a doula.

“I’m not on survival mode anymore,” Ms. Anthony said. “For my vision of what I’m looking to provide my children, I’m now looking to leave NYCHA housing.”

For Jonathan Alexander, the success of his food business, which he started while living at the Todt Hill Houses on Staten Island, allowed him to move out of the complex and into a basement apartment in late 2019, around the time he started a takeout empanada restaurant.

Mr. Alexander, 32, had started his own catering company in 2018, serving employees at corporate events. He pursued his cooking dreams after spending years working at a construction job that left him with permanent burn scars on his arm.

But when he worked in restaurant kitchens around New York City, he often felt disrespected and belittled, embarrassed to tell his colleagues that he was living on his mother’s couch in public housing.

“When I used to sit there on my mom’s couch, I would cry to myself,” he said. “I knew that I was held back because of my social status, being from the projects, being Black, being poor.”

His takeout restaurant folded during the pandemic. And flooding caused by the remnants of Hurricane Ida destroyed his apartment on Staten Island last summer, wiping out thousands of dollars worth of cooking equipment.

Social media became a lifeline. Mr. Alexander sought out prominent restaurateurs on apps like Instagram and Clubhouse, asking them how to negotiate contracts and raise capital. I have joined EatOkra, an app that promotes Black-owned eateries. I have booked freelance catering gigs through the Jitjatjo app.

Through word of mouth, Mr. Alexander’s calendar is now filling up with private chef bookings, including a recent offer of $22,000 to cook for a family in the Hamptons for a month. He and his son recently moved into a new house.

For NYCHA residents, one hurdle to growing a business is the fear that earning more money will make their rents go up. The housing authority calculates monthly rent based in part on the value of residents’ bank accounts. Last year, the average public housing family’s rent in New York was $533.

This system, the new report said, discourages tenants from saving money to start a business or from reporting self-employment income. NYCHA residents can also lose other government benefits, like food stamps, if their income exceeds a certain threshold.

The report said New York City has done too little to enroll NYCHA residents into the federal Family Self Sufficiency program, which allows public housing residents to accumulate savings in an escrow account without paying more for rent.

Brandi Covington, 44, who started her meal service company in 2017 while living in the Pomonok Houses in Queens, now has 20 employees after she built up a client base and won city contracts. But the pandemic taught her how to set aside a rainy-day fund for the first time.

“Having enough money was new to us,” she said. “For a moment, we got frivolous because we had more than exactly what we needed.”

She runs the business, Cooking With Corey, with her fiancé, Corey Whittenburg, 40, a professional chef. Their biggest contract is delivering meals to students at the American Musical and Dramatic Academy, a college on the Upper West Side.

The success of the business allowed Ms. Covington to move out of NYCHA housing last year and into an apartment in College Point, Queens.

At Ojala Threads, an online store that sells baby clothing celebrating Indigenous Caribbean heritage, 2021 was its best year ever, with nearly $6,000 in sales.

Its founder, Ramona Ferreyra, 41, a resident of the Mitchel Houses in the South Bronx, turned to entrepreneurship in 2018 after she could no longer physically work at office jobs because of an autoimmune disorder.

Ms. Ferreyra’s biggest challenge now is finding affordable retail space where she can showcase her goods.

“I don’t intend to be poor for the rest of my life,” Ms. Ferreyra said. “Entrepreneurship is a path to economic independence for me.”