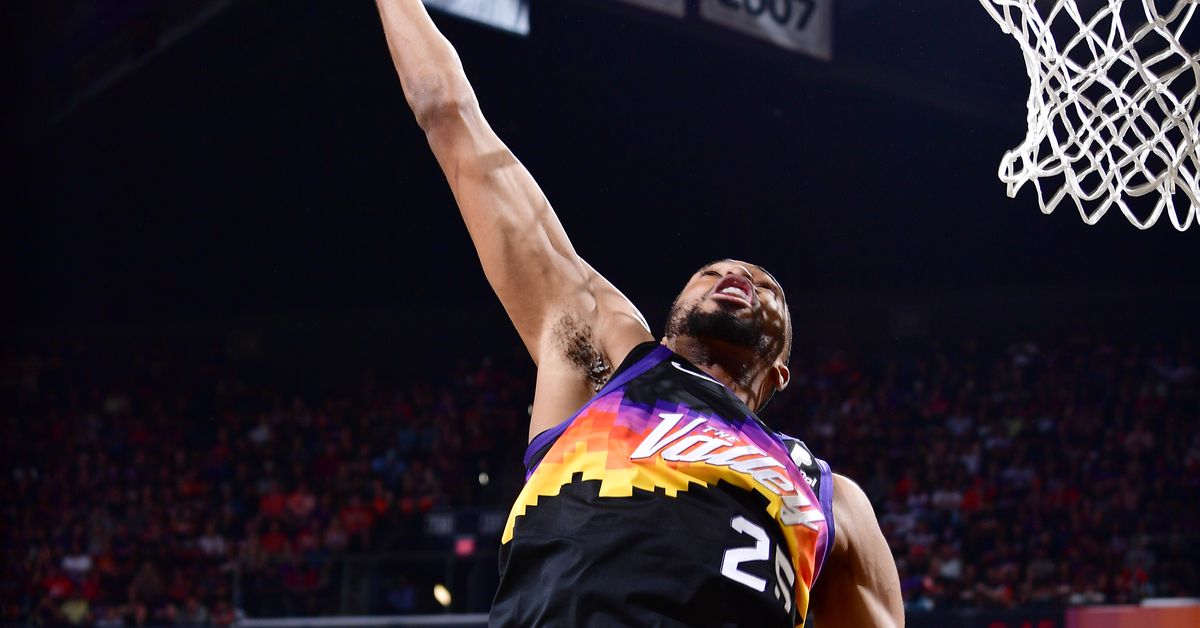 For a while there, we finally got to see real Phoenix Suns basketball!

Chris Paul was buoyed up, the offense was clicking, and finally the cap came off the rim from a three-point ground. The Suns had a 15-point lead at the start of the second quarter and the rest of the game the Pels tried to get below 10.

They ruined the game and the Suns helped by making a bunch of dumb fouls when they were trying to be aggressive. Jae Crowder committed five fouls early in the third quarter. Cameron Payne got five midway through the third quarter.

Once again, the Pels got to the line a lot, leading the Suns 30-14 in free throw attempts early in the fourth quarter.

They got to seven points with just over four minutes left, but Chris Paul pushed them back to 11 with a middy and a pair of free throws. The Pelicans never went below 9 again.

Mikal Bridges really stood out as an offensive outlet, scoring an important 31 points on 12-of-17 shooting (4-of-4 from 3-point range). Chris Paul had 22 points and 11 assists. Deandre Ayton had 19 and 9 rebounds.

The Suns achieved that magical 40, in rebounds, for the first time in the entire series. They lost the rebound battle by only 7 this time.

The Phoenix Suns now have a 3-2 lead in their first-round series against the Pelicans, needing just one more win to close out the series.

The Phoenix Suns came out on FIRE with energy and plays that reminded me of the best team in the NBA for the first time in weeks, taking a 14-8 lead to force Willie Green’s first timeout to restart his team.

The Suns took a 21-18 lead as the Pelicans went back to their ‘big two’ lineup of Jonas Valanciunas and Larry Nance that has been killing the Suns on the boards. This time, Monty Williams responds by bringing back Deandre Ayton to pair up with JaVale McGee. The Suns will improve rebounding, but I’m not sure about anything else … like space. With them are Cameron Payne, Landry Shamet and Jae Crowder (until he committed his second foul).

The Suns’ defensive activity is extremely high, with four steals early in the action, and they even got the first three from CAM PAYNE, the first of the series.

But foul trouble could hurt these Suns again, with Payne drawing his third foul with a minute left in the first quarter after Jae Crowder drew his second foul.

The Suns finished the first quarter up, 32-20. Chris Paul looks like himself, with 8 points, 3 assists and 2 steals in 9 minutes. The Suns are shooting 54% for the fourth, attacking the rim with abandon. Cam Payne had 7 off the bench. Deandre Ayton had 8 points and 2 rebounds, and the Suns actually LEAD in rebounds 11-9 after one quarter. The only downside: He still can’t hit 3-pointers (1-for-7).

Biyombo starts the second quarter and helps force a turnover. The Suns took a 36-22 lead before a short run by the Pelicans took them to 38-27.

With Payne’s three fouls, we get to see Aaron Holiday, who I really like as a matchup against the small Pelicans of Alvarado and Graham.

Quickly, the Suns went up 43-28 with Aaron Holiday making some plays, along with the efforts of DA and Bridges. These suns are burning tonight. It’s crazy that they’ve raised 15 and still haven’t made 3s (1 of 9 now).

The Suns had a 46-34 lead when Aaron Holiday converted the Suns in the second three of the game. But then Jae Crowder committed his third foul of the half, putting Brandon Ingram on the line. He had to get out.

The Pelicans tried to get back into the game with Jose Alvarado donning Chris Paul’s jersey, but the Suns used a lot more action (picks) to get Paul running downhill to start the offense.

The basket finally started to open up, with Cam Johnson, Mikal Bridges and Landry Shamet hitting a 3-pointer during a streak that pushed the Suns’ lead back to 15.

The Suns came out in the second half and continued shooting from the outside, taking a 75-58 lead with their eighth 3-pointer of the game (and seventh of last 12 attempts) just under 5 minutes into the half.

Chris Paul is right up there with 16 points and 8 assists. Deandre Ayton has 18 and 6. Mikal Bridges has up to 13 points, including 3/3 from 3-point range. On the downside, Crowder now has 5 fouls.

This is a good sign, considering the Suns have lost the third quarter in all four games before this one, by an average of 11 points.

However, the Pelicans used their strategy well: get the Suns into foul trouble, get the bonus and let Brandon Ingram get to work. Soon the Suns’ lead was down to 10, a bad sign as Cam Payne helped the Pelicans by drawing his fourth and fifth fouls, matching Jae Crowder for the team most.

A Cam Payne three, his second of the game and of the series, gave the Suns an 11-point lead after three quarters, 89-78. Payne now inexplicably has 12 points and 5 fouls in just 7 minutes of play. He had never before seen this from a TIP GUARD. Maybe JaVale McGee has posted something like this before.

In the fourth quarter, the Suns and Pelicans continued their attack on each other. The Suns’ rhythm has definitely gone with all these fouls.

Jose Alvarado got into Chris Paul again, this time forcing a turnover because he didn’t pass the ball to midcourt in 8 seconds. Paul was so mad that he got a T, but the Pels failed. The Suns got a steal, but then gave it up on the fast break and… well… another Suns foul.

Then Chris Paul came by. First, he uses a DA screen to open up and does his patented middy after faking Alvarado out of his uniform. He then coaxes rookie Herb Jones to pass and gets to the lane with the Pels FINALLY on the penalty. Suns up 11.