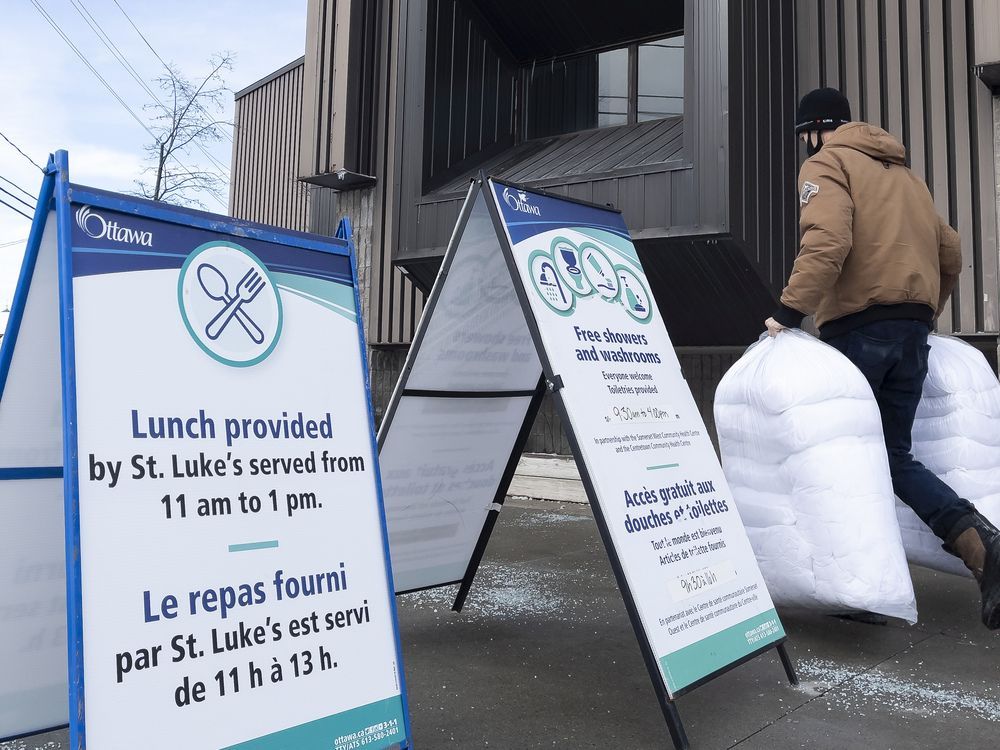 The future of a social services initiative born of necessity and widely embraced by community members, service providers and city staff will be the subject of debate at this week’s community and protective services committee meeting.

Staff have recommended keeping the doors open at the city’s pandemic-era respite centers a while longer. The well-used facilities in Hintonburg and Vanier have transformed community arenas into safe places to rest, grab a snack, or take a shower.

It would be an extension to the timeline staff proposed before the arrival of the Omicron variant, but the new proposal still sees the centers shutting down eventually.

Keeping respite running in its current form would mean the continued diversion of the host facilities from their regular and recreational community use, and isn’t something the city has prolonged funding for. And postponing the closure of the respite centers “contributes to confusion and increased expectation for ongoing city service delivery that is not part of normal operations,” staff wrote in their report to the CPS committee, which will meet Thursday.

Instead, staff suggest transitioning away from the respite center at Tom Brown arena in the third quarter of 2022, and setting up a “service hub” in the city’s employment and social services office at 370 Catherine St. They recommend a similar model for the Vanier area, where they propose keeping the Bernard Grandmaître respite center going for the rest of 2022.

The city’s respite model started early in the pandemic — when many social service sites shut down or scaled back in response to the virus and related restrictions — with the opening of a center at McNabb Arena in April 2020 offering washrooms, showers, and refreshments.

It was “branded a success,” staff wrote, but had to close that fall due to heating challenges. In November 2020, three new respite centers opened — the two that continue to operate, and one at St. Paul’s Eastern United Church downtown, which closed on Oct. 1, 2021, after the city started to hand its responsibility for respite-type services back to community agencies.

The closure of the St. Paul’s site stirred up concern about the future of the city’s respite centers from their clients, city councillors, and community stakeholders, staff noted.

Between Nov. 29 and Jan. 6 (after meal services were discontinued, leading visits to drop), an average of 66 people visited the Tom Brown respite center daily, while 49 stopped in at Bernard Grandmaître, for a combined total of approximately 2,000 visits monthly. Of the 57 respite clients who completed a survey in September, 42 per cent said they lived predominantly in subsidized housing, rooming houses, or shelters, while nine per cent indicated they were sleeping outdoors.

According to staff, top services accessed at the centers were food, showers, bathrooms, and “a safe place to rest,” but other important ones were employment, housing and harm reduction supports.

Speaking to this newspaper last February, one respite client described the Tom Brown site as “a saviour” with “a safe, friendly atmosphere” where he could lie down and sleep during the day if he needed it. Another noted that its staff “treat you as though you were a normal citizen.”

Staff wrote in their report that there’s already a gap in available respite-type services during evenings and weekends, and agencies were worried about being able to maintain services at those times after temporary funding from the province expires this week.

The new service hub proposed by staff would be in a smaller space, but use existing infrastructure and require no new money this year, to “offer a suite of person-centered municipal and co-located community partner services in one convenient location,” with the possibility for additional hubs based on need.

Staff also said they would work with day programming providers to identify ways to close gaps and best serve vulnerable residents, and would report back on the plans and needs related to day programming-type services in Vanier and Centretown by the first quarter of 2023.

The monthly estimated cost to operate both respite centers totals $113,600, on top of the loss of $105,208 in monthly revenue the city calculates it would bring in if it was using the facilities for their regular purposes. The cost is covered by a provincial program called the Social Services Relief Fund through the end of March.

Staff will be looking to other levels of government to pick up this tab for the remaining life of the respite centres, alongside an estimated $208,120 monthly for the rest of the year to support community providers of day programming and similar services whose pandemic funding from the province may soon run out, and close to $1 million monthly to operate physical distancing centers that currently account for one quarter of the beds in the community shelter system.

The province has advised that municipalities can expect additional SSRF funding after March 31, but details haven’t been provided, and staff have contingency plans in place. Worst case, they’re looking for delegated authority to withdraw from a reserve account, if needed.