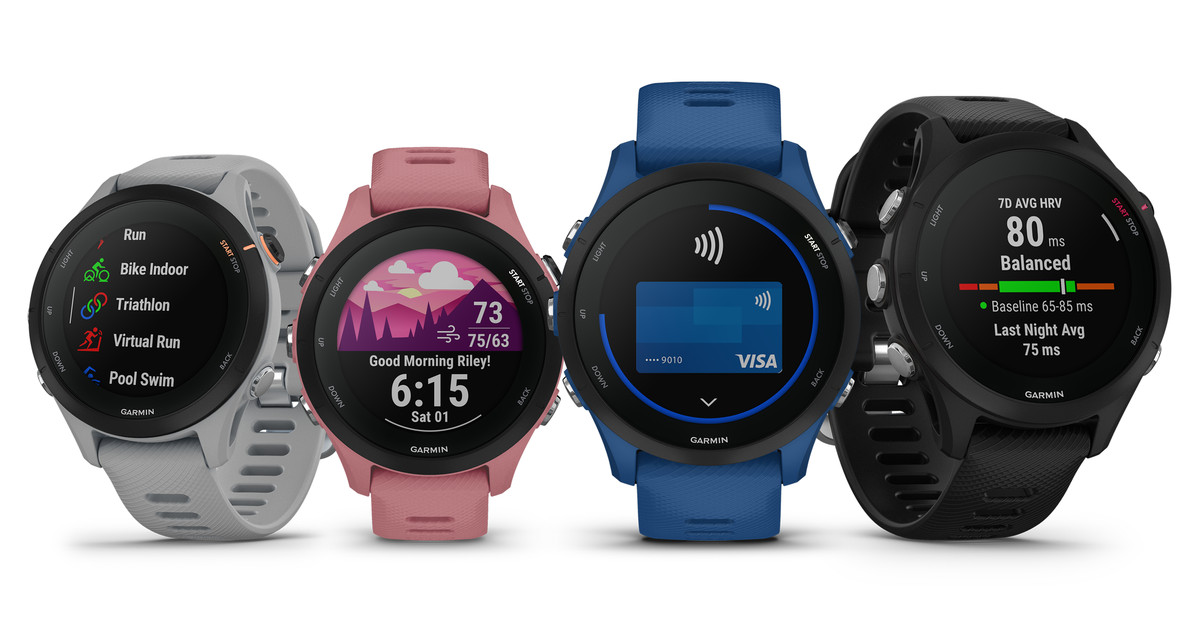 Just in time for Global Running Day, Garmin is introducing two new running watches to its Forerunner lineup: the $349.99 Forerunner 255 and the $499.99 Forerunner 955. Both GPS watches feature multi-band GPS and new running features, including a running widget. The Forerunner 955 will also come in a Solar version which, as the name suggests, adds solar charging for even longer battery life.

The Forerunner 255 is a mid-range, lightweight running watch that is based on the Forerunner 245. It will come in two sizes. The standard Forerunner 255 will measure 46mm and weigh 49 grams, while the smaller 255S will measure 41mm and weigh 32 grams. There will also be Forerunner 255 Music and 255S Music variants, which will be able to store up to 500 songs on the watch. Garmin says it also includes playlists from Spotify, Amazon Music and Deezer. Music models will cost an additional $50 for a total of $399.99. The watches are rated for 5ATM water resistance with an estimated 14 days of battery life, with up to 30 hours in GPS mode.

Big additions this time around include a new running widget, sleep heart rate variation (HRV) status, multi-band GPS, and the ability for triathletes to more easily switch between sports with the push of a button. The race widget will include race prep information including performance predictions, race day weather and a countdown clock. Multiband GPS is an increasingly popular feature in multisport watches that increases GPS accuracy by allowing communication with multiple satellite frequencies. The promise is better accuracy in environments where it’s hard to get a good signal. Lastly, the watch also features a “morning report” function. When a user wakes up, the watch will deliver a brief summary of the day’s weather, a daily training suggestion, and a report of the previous night’s sleep, recovery time, training status, and HRV status.

Compared to the Forerunner 245, the 255 lineup adds an NFC chip for Garmin Pay. Otherwise, it’s not much different sensor-wise. It still features continuous heart rate monitoring, as well as SpO2 sensors to enable features like Body Battery. The metric measures how well you’ve recovered during sleep and how “drained” you are during the day due to stress. The Forerunner 255 series will also support basic smartwatch features like push notifications and Garmin safety features like incident detection and live tracking. For training features, it will also provide users with daily training suggestions, as well as access to training programs through Garmin Coach and detailed metrics in the Garmin Connect app.

Meanwhile, the Forerunner 955 is more of a top-of-the-line running watch. (It’s not as feature-rich as Garmin’s flagship Fenix ​​series, though.) It features a 47mm always-on full color touch screen and weighs 52 grams. However, button fans need not worry. The 955 still includes five physical buttons that can be used in conjunction with the touch screen. Like the 255 series, it has a 5 ATM water resistance rating, but it has a slightly longer battery life at an estimated 15 days, with 42 hours in GPS mode. There’s also a $599.99 Forerunner 955 Solar, which features Garmin’s proprietary Power Glass lens. Solar-charged, the 955 Solar gets up to 20 days on a single charge, with 49 hours in GPS mode. (This assumes you get about three hours per day in 50,000 lux conditions, so take it with a grain of salt.)

Like the Forerunner 255 series, the Forerunner 955 also includes multi-band GPS, HRV status, morning reports, and the new running widget. It also has a new training readiness metric. As the name implies, the metric takes into account sleep, recovery time, HRV, and a few other metrics to give users a score indicating how “ready” they are for a training session. It also adds real-time resistance tracking, which Garmin first introduced with its Fenix ​​7 series.

When it comes to health tracking and smart features, the Forerunner 955 has the same basic features as the 255. However, it adds a few extra training metrics, like PacePro and ClimbPro, which provide real-time guidance on your pace. and elevation. You can also store a larger number of songs on the 955 – 2000 to be exact.