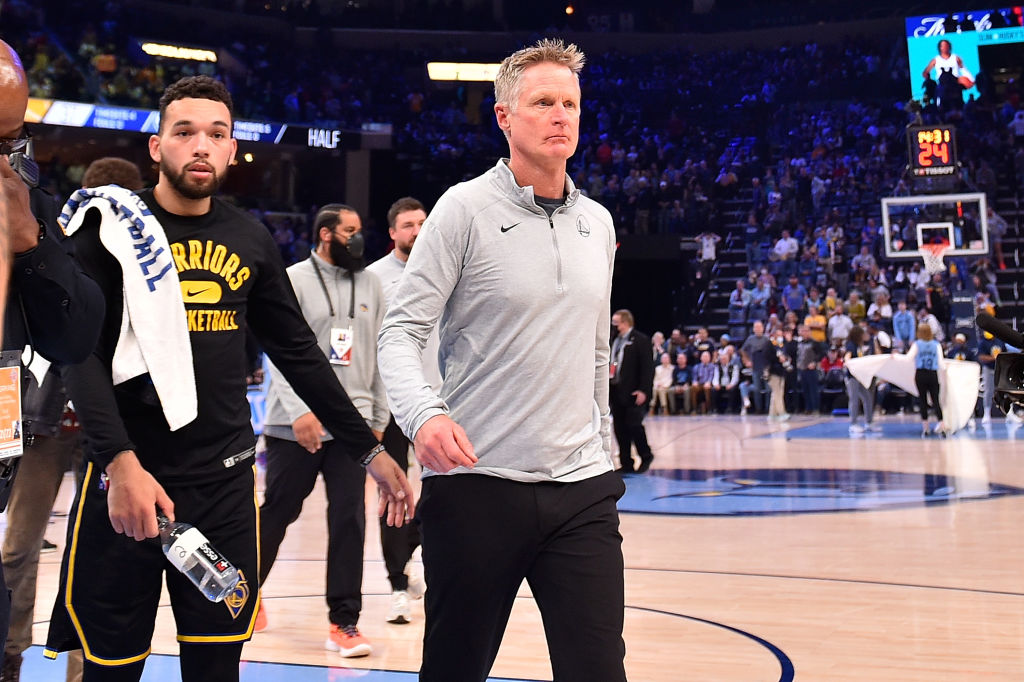 With players streaming to the locker room and Golden State down 63-37, Kerr could be seen screaming at Brett Nansel (likely about what looked like a Grizzlies goaltended on a Jordan Poole attempt at the rim just before the end of the half). But after Nansel very leisurely assessed two technical fouls and tossed Kerr, pointing toward the exit door, the Warriors head coach continued to scream at the ref, following alongside him as he exited the court. Kerr mildly forearmed away his own player, guard Gary Payton II, who attempted to corral him before Kerr began to pursue a second official, JB DeRosa.

Normally, this would all be par for the course — a coach getting tossed with his team down 26 at half and really selling it even after he was ejected. Thing is, 99% of the time an ejection would occur with Kerr only a few feet from the Warriors bench, meaning assistant coaches would almost immediately grab their head coach and let cooler heads prevail. But with the chaos happening in the middle of players returning to the locker room, it took assistant coaches a full 10 seconds to get to the Warriors’ 8th-year head man, leading to the pursuit of both officials.

Steve Kerr was ejected at the end of the first half in Memphis pic.twitter.com/vEHasvoL9r

The Dubs have now lost four of their last five, including three embarrassing L’s to the Atlanta Hawks, Washington Wizards, and Orlando Magic — three teams that are a combined 90-135. The Magic, a league-worst 20-56, beat Golden State by eight on Sunday.

The Warriors were without future Hall of Famer Steph Curry (foot) for a sixth straight game, but also Klay Thompson, Otto Porter Jr. and Draymond Green, who all remained the second game of the back-to-back.

Golden State is now in real danger of tumbling in the standings as the West’s top two seeds — Phoenix (61-14) and Memphis (53-23) have opened up a 5-game cushion with six games to play. Just three games separate third (where the Warriors currently sit) and sixth in the Western Conference, and Golden State closes the season with a monumental game against one of them — the Utah Jazz on Saturday at 5:30 pm at Chase Center.

Assistant Mike Brown, who filled in for Kerr after he was tossed Monday night, said the whole display — coupled with an impassioned halftime speech from Kerr — fired up the team going into the second half.

“Everybody was a little down because we were getting our behinds kicked, and then our head coach gets kicked out at that time,” Brown said during a post-game media address. “But I thought Steve did a fantastic job of addressing the team and trying to get them fired up and our guys came out in the second half and carried that over and competed.”

The Warriors were outscored by two in the second half (and trailed by as much as 30), turning a 26-point halftime deficit into a 28-point final.

Golden State returns to court Wednesday, when it hosts the NBA’s best team, the 61-win Suns. Tip-off is set for 7 pm at Chase Center.