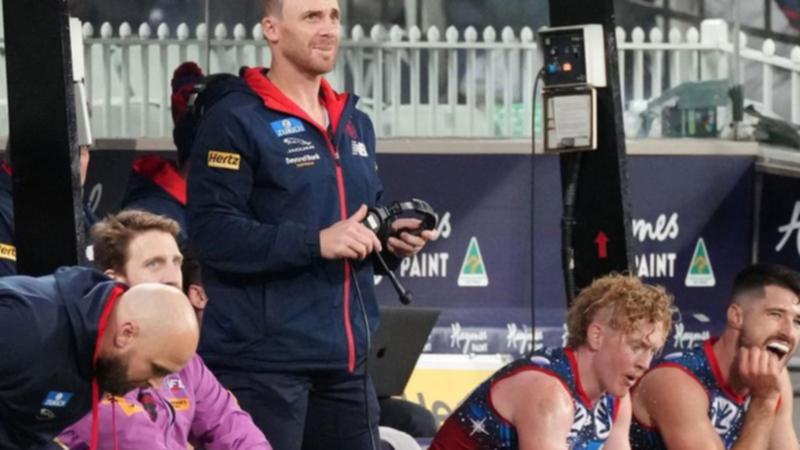 Simon Goodwin has revealed how he lost his passion for the AFL amid a mental health battle before becoming Melbourne’s first premiership coach in 57 years.

The 45-year-old’s job is now the safest among the 18 AFL coaches, but not too long ago Goodwin was the opposite.

For the first time, Goodwin has opened up with meaningful details about the struggles he endured during the Demons’ tumultuous 2019 campaign.

After leading Melbourne to their first finals series in 12 years in 2018, the Demons suffered a dramatic slump the following year when they fell down the ladder to finish 17th with just five wins.

“(When) we started falling down the ladder and losing football games, there was no question I started to become more of a recluse,” Goodwin told AFL Media.

“I started to lose passion for the game.

“I was standing there talking and trying to answer a question, and I couldn’t get the words out of my mouth.

“I didn’t know what had happened and when we looked at it, it was that I wasn’t coping with the pressure, the stress and the anxiety that came over me.

“I had to start to really address some of the things that were going on in my life and where I was as an individual.”

Documents leaked in February this year revealed that the club’s hierarchy discussed the possibility of removing Goodwin from his role before the 2021 season.

But Goodwin revealed that he was already back on the right track after the disastrous 2019 campaign.

“It can be a pretty lonely job, isolated, full of pressure, stress and anxiety, and it took a while to figure it out,” Goodwin told AFL Media.

Goodwin signed a two-year contract extension last month, which means he will lead the Demons through at least the end of the 2024 season.

After clawing their way to last year’s grand final win, Melbourne sit atop the ladder with a 10-1 record going into Saturday night’s clash with the Sydney Swans.