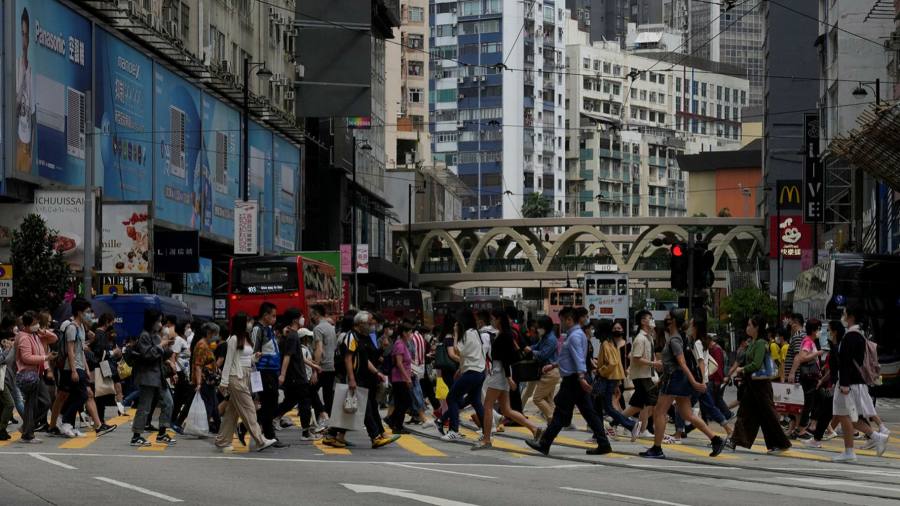 Hong Kong announced an unexpected relaxation of coronavirus social distancing restrictions on Tuesday as the Asian financial hub released data showing its first economic contraction since the start of the pandemic.

The easing of COVID-19 measures in Hong Kong contrasted sharply with continued strict measures in mainland China, where residents in parts of Shanghai remain restricted to their homes and Beijing teeters on the brink of lockdown.

Official data showed Hong Kong’s gross domestic product contracted 4 percent in the first quarter of the year compared to the same period in 2021, a much worse performance than the 1.3 percent reduction estimated by economists. surveyed by Bloomberg.

Economists said the contraction showed the heavy toll the Chinese government’s tough “zero covid” policy has had on Hong Kong.

Carrie Lam, the city leader, said a drop in Covid cases since her worst outbreak earlier this year made it possible to reopen beaches and pools starting Friday and allow up to eight people to dine together.

“We were concerned that. . . there could be an increase in confirmed cases, fortunately this did not happen and we see that the epidemic is stabilizing,” Lam said on Tuesday.

But economists said the latest data was a warning sign about the attractiveness of the financial hub, which remains tied to China’s broader COVID policy and maintains strict controls on international travel.

“Hong Kong was affected by the Omicron outbreak, but the other surprise was that although we saw a decline in service exports and private consumption. . . there was also a considerable decline in exports of goods,” Lai said.

Lai added that exports slowed due to a drop in demand and the closure of borders between Hong Kong and the mainland, as well as lockdowns in Chinese cities.

Singapore, South Korea and Taiwan had GDP growth of more than 3 percent in the first quarter, it added. “So with zero-Covid. . . Hong Kong was particularly affected.”

Starting May 19, a host of other venues, from bars to mah-jong parlors, will reopen, and cruise ships will also be allowed to resume. Restaurants can open until midnight, from 22:00 previously. Bars can open until 2 a.m., but only four people per table will be allowed.

Hong Kong will maintain its strict quarantines for arriving travelers and will continue to ban airline routes if a certain number of Covid-positive passengers are discovered on a flight.

The tough restrictions have helped trigger an outflow of residents and expats and caused some global companies to reconsider the size of their presence in the city.

The city’s reputation has also taken a hit from the crackdown on free speech that followed the 2019 anti-government protests.

Hong Kong fell 68 places to 148th out of 180 countries in the 2022 Press Freedom Index released on Tuesday, and now ranks similar to Sri Lanka, the Philippines and Turkey. It was the fourth biggest year-on-year drop in the rankings since the index was first compiled in 2002, according to an analysis by the Financial Times.

Lam insisted that Hong Kong’s press and media were “as vibrant as ever”, but journalists and media organizations were “not above the law”.