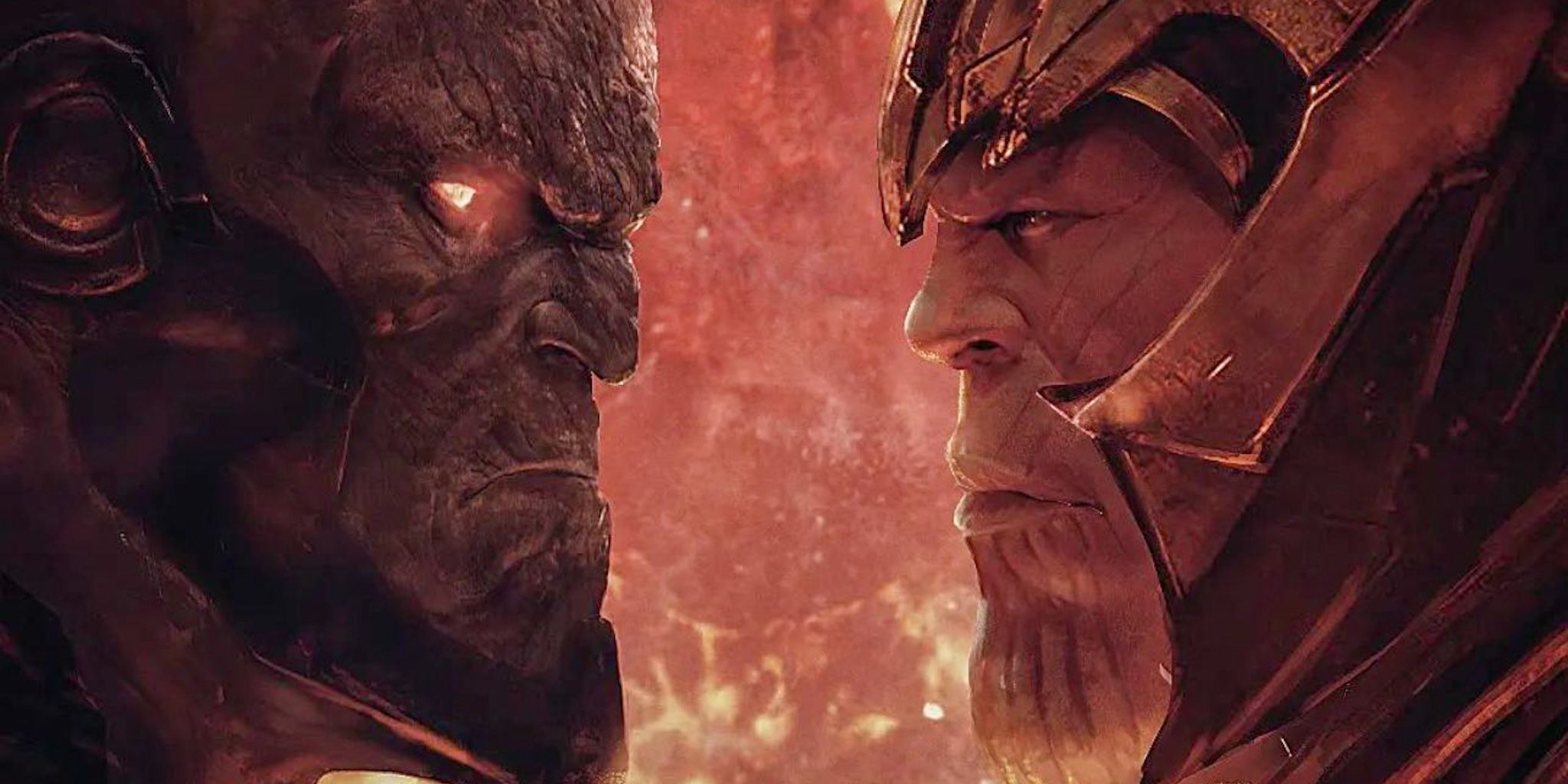 A piece of MCU-DCEU crossover fan art imagines a possible confrontation between the two universes’ major villains, Thanos and Darkseid.

A piece of fan art crossing over the Marvel Cinematic Universe and the DC Extended Universe shows what a potential face off between major villains Thanos and Darkseid could look like. Comic book movies dominated the box office throughout the 2010s, riding an ever-increasing wave of popularity as audiences, by and large, turned out in droves to see the newest adaptations of characters from the page. This is in large part due to the success of the Cinematic Universe model, popularized by Marvel Studios and adopted by their competitors, that kept audiences invested in ongoing storylines and post-credit scene teases.

SCREENRANT VIDEO OF THE DAY

Of course, these epic sagas required villains worthy of an amalgamation of mighty heroes, and Marvel and DC had two similar big-bads from their respective comics to serve as major, overarching threats. Marvel Studios opted for the Mad Titan, Thanos (Josh Brolin), as a recurring villain, set up in avengers mid-credits scene in 2012 and becoming the greatest threat Earth’s Mightiest Heroes ever faced in Avengers: Infinity War and avengers: end game. The DCEU has by contrast produced fewer films in their ongoing continuity, but the Justice League’s major adversary, Darkseid (Ray Porter), was hinted at in Batman v Superman: Dawn of Justice before finally making an appearance in Zack Snyder’s Justice League.

Related: MCU Phase 5 Theory: The Beyonder Is The MCU’s Next Thanos (Not Kang)

Now, @datrintiart produces an intense piece of MCU/DCEU fan art that pits the wielder of the Infinity Gauntlet against the Lord of Apokolips. The piece shows the two juggernauts in profile, staring each other down against a fiery backdrop. The designs used are specifically the versions from their film series, which were brought to life via Brolin and Porter and performance capture technology. Check it out below:

The piece is very well-made and illustrates a desire most fans likely have to one day see the cinematic versions of characters from the two major comics publishers crossover. The likelihood of seeing this remains somewhat doubtful, for the major reason of the rights to Marvel and DC characters residing with two separate companies – Disney and Warner Bros., respectively – meaning a lot of legal complications could make such a meeting incredibly difficult. However, Marvel and DC themselves did in fact work out a crossover comic series entitled DC vs. Marvel in the mid-90s, in which fans were invited to vote for the winner of several one-on-one fights, so the concept has come to be somewhat possible in the past.

while to MCU–DCEU crossover doesn’t appear to be on the horizon, fans are also uncertain as to when they can expect to see Darkseid or Thanos next. Thanos appeared to have been effectively dealt with by the end of avengers endgame, which saw his demise at the hands of Tony Stark, so, barring any resurrections, it would appear the character’s story is finished. However, this didn’t stop an alternate version of Thanos appearing in the multiverse-spanning animated series. What If…?, voiced by Brolin himself, showing future appearances in that series or flashbacks in other projects are entirely possible. As for Darkseid, the character portrayed by Ray Porter may not have appeared at all, it was not for the fan demand for the Snyder Cut after the character was excised from the theatrical version. And, with Ava DuVernay’s New God’s film canceled by Warner Bros., it seems unlikely that the character would make a reappearance. Regardless, this fan art teases an interesting confrontation that would be sure to please comic fans from either the DC or Marvel camps.

Next: Darkseid vs Thanos: How The Justice League & Avengers Villains Are Different

Matthew Jasper is a Film & TV News Writer for Screen Rant, producing articles on recent events within the industry. Matthew has worked under Universal Pictures UK, the BBC and local film festivals during his developing career. Based around Birmingham, when not watching and writing about various Movies and TV Shows, Matt can be found trying to beat his PB in the gym or putting a dent in his never-ending reading list.