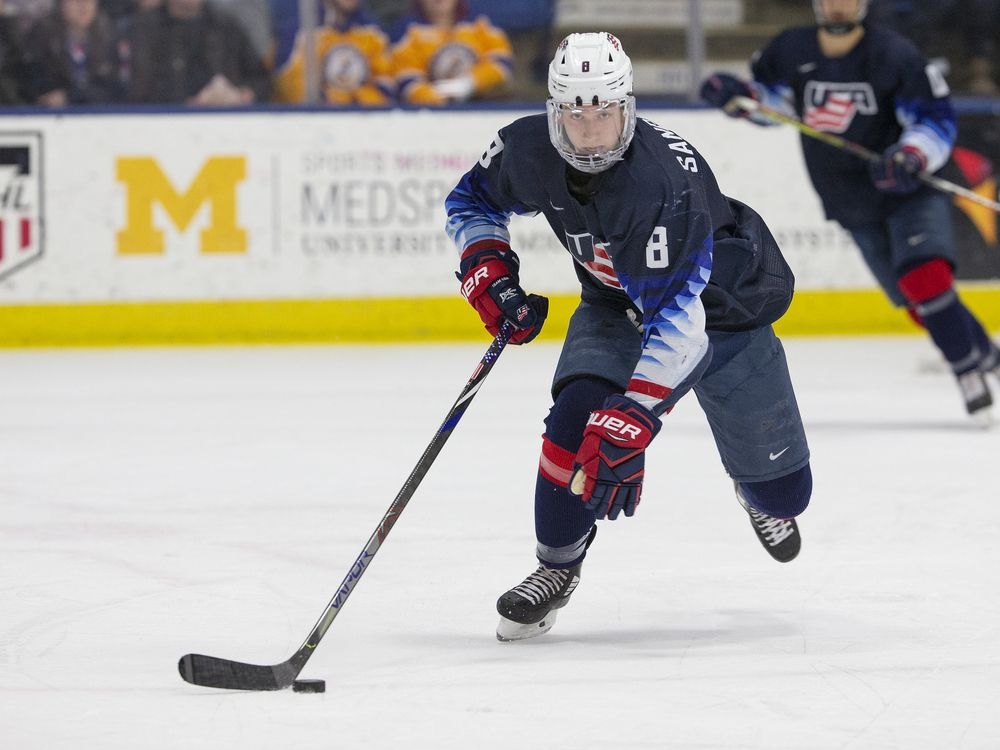 It hasn’t taken long for Jake Sanderson to connect with his new Ottawa Senators teammates and his new community.

Captain Brady Tkachuk has opened up the doors to his house for the 19-year-old defenseman, who signed his first pro contract on March 27.

“Everyone has been awesome to me,” Sanderson said Monday, meeting with the media for the first time since leaving North Dakota and signing his three-year entry level deal.

“They’ve welcomed me with open arms, so that feels good. The guys here are embracing me and I appreciate that, too.”

Sanderson, the Senators fifth overall draft selection from 2020, arrives with sky high expectations based on his success at North Dakota, where he registered eight goals and 18 assists in only 23 games of his injury-filled season.

It’s the last of those injuries, a right wrist ailment in mid-March that required surgery, which is delaying his much-anticipated debut.

Sanderson, who was wearing a small cast over his wrist Monday, is making no predictions on when, or even if, he will play this season. The Senators have 14 games remaining, including Tuesday’s game in Montreal.

“The rehab has gone pretty well,” he said. “I’m seeing the trainers every day and seeing doctors, too. Everything is going positive, but I’m not sure about a timeline right now.”

In an ideal world, Sanderson says, he would get a few games in, but he isn’t going to jeopardize anything by rushing back too soon and potentially re-injuring the wrist.

The short-term plan is for Sanderson to get back on the ice this week.

“It’s my wrist, it’s not my legs or anything, so I can keep my legs going and stickhandle a little bit, but I’m just kind of limiting it right now.”

While Sanderson was dominant when he was on the ice at North Dakota, his season was full of unforeseen pit stops and speed bumps.

He missed a pair of games due to an illness in November and two more due to an injury in December.

He served as captain for the US for the world juniors, but that tournament came to an abrupt end due to a COVID-19 outbreak.

Sanderson tested positive for COVID-19 himself in the New Year and didn’t join the US Olympic team in China until the day before the club’s first game. At the Olympics, he played in only one game, against Canada, before suffering yet another injury that caused him to miss four weeks.

Then came the wrist injury and surgery.

Through it all, he has stayed upbeat.

“It has been a crazy year,” he said. “I had a couple of injuries, which was a bummer, but those are things you can’t control, so you have to roll with the punches. With world juniors, that getting cancelled, it was a bummer, too, but everything was fine.

“I had a great season with my buddies at North Dakota and I had an opportunity to go over to the Olympics, too, which was pretty cool. I got injured there again and I kind of turned into a fan there, watching all the other events and cheering on the boys, but it was a crazy year, but definitely a good one, for sure.”

Sanderson says that Shane Pinto, who played with Sanderson at North Dakota, “has been taking me under his wing,” showing him the ways of the NHL, just like he did at university in 2020-21.

Sanderson is expected to be a major piece of the club’s exciting young core that also includes Tkachuk, Chabot, the red-hot Josh Norris, Drake Batherson, Tim Stuetzle and Alex Formenton.

“I’ve heard great things,” he said. “It’s kind of a younger group and it’s nice for me to get in and gel with everybody. The older guys have been good to me, too. Everyone is a role model and I look up to them.”

While Tkachuk is doing the Tkachuk thing — Norris and Stuetzle served as roommates last season and Colin White was there in 2019-20 — veteran defenseman Nick Holden also says part of his role is to help young newcomers like Sanderson settle in as quickly as possible.

“You just try and let him be himself and just talk to him as much as possible,” said Holden. “You can reach out and make sure he feels included and if he has any questions, you let him know you are available.”

Sanderson has already picked up a few new fans.

Saturday was moving day as he moved from his hotel into Tkachuk’s place. Considering it was an off-day from Senators practice, Tkachuk took it upon himself to check in on Holden’s young kids, who have attached themselves to the Senators captain. Sanderson tagged along as Tkachuk checked out their minor hockey action.

When Sanderson does hit the ice for the Senators, he’ll become the first Ottawa player to sport the number 85.

Sanderson’s father, Geoff, wore number eight during his NHL career, but that digit is retired, once owned by infamous original Senator Frank Finnigan.

“Not a lot of guys wear 85 in the NHL, so I thought that was unique,” ​​Sanderson said.

The most notable number 85 in NHL history was Petr Klima, who topped 30 goals five times in his career and won a Stanley Cup.

Sign up to receive daily headline news from the Ottawa Citizen, a division of Postmedia Network Inc.

The next issue of Ottawa Citizen Headline News will soon be in your inbox.