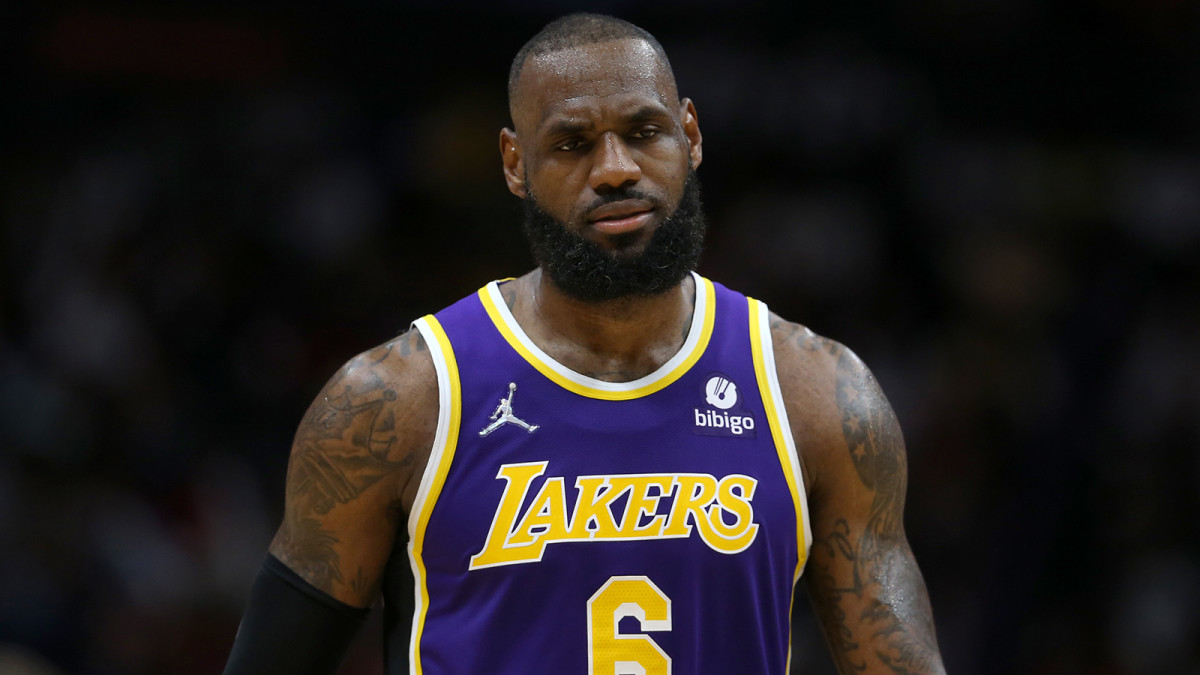 The question plenty of people are asking: Will the Lakers hold on to reach the play-in round? But the question we should be asking: Should the Lakers—who could find themselves in a tie for 10th place in the West after tonight—even really want unto?

Of course the team wants to reach that stage, because it’s March: As Saint Peter’s just illustrated, you never know what can happen around this time of year. But asking whether the Lakers should push full-steam ahead with such an effort seems fair.

As we’ve heard over and over again, the Lakers are the NBA’s oldest team—one that is led by 37-year-old LeBron James, who somehow leads the NBA in scoring, but who also suffered a bad ankle sprain over the weekend . He’d already missed a game last Wednesday against Philly due to a sore knee. Managing James’s injuries comes at the tail end of a long, labor-intensive campaign in which The King ranks third in minutes per game, at 37.2. The Lakers’ other franchise player, big man Anthony Davis, hasn’t played in a month and a half and is honestly better off getting stronger and preparing for next season, given that Los Angeles isn’t accomplishing anything without him and James fully healthy . (It’s noteworthy that the Lakers unraveled last postseason after cobbling things together late due to a string of ailments. Davis went down with a groin injury during the first-round series with Phoenix, and James played with a tentativeness that made it look like he might have been less than 100%.)

Some will say there’s value in the Lakers seeing how far they can go. Between Austin Reaves, Wenyen Gabriel, Malik Monk and Stanley Johnson, they have youngsters who could benefit from games with more on the line. After all, Phoenix used its 8–0 run in the 2020 bubble as a springboard to reach the Finals the following season, and now the Suns own the league’s best record by far. Memphis, owner of the NBA’s second-best mark, ignited this season after the club’s impressive takedown of Golden State in the play-in round last year.

But teams like New Orleans and San Antonio have younger rosters that’d figure to benefit far more while also being more excited about the opportunity. And frankly, even with James in the mix, the Lakers generally seem to need something additional to play their hardest consistently. Their defense often leaves much to be desired, declining to hustle back in transition. On average, opposing offenses take shots against Los Angeles just 11.5 seconds into the shot clock, more quickly than any other club, according to data site Unpredictable.

The club, which fashioned itself to contend to begin the year, certainly has its work cut out. Whether James plays or not, the Lakers have the NBA’s second-toughest remaining schedule over their final eight games: Dallas, Utah, New Orleans, Denver, Phoenix, Golden State, Oklahoma City, then Denver once more for good measure. (The Spurs, the team chasing for 10th, have the fifth-toughest slate remaining.) Even if Los Angeles holds on to make the play-in round, a 10th-place finish would require winning twice in a row to make the playoffs.

The second matchup, if the Lakers can get that far, could end up being a “road game” against their roommates, which would at least figure to give James and his teammates a decided crowd advantage over the Clippers. But as the calendar flips to April, it’s worth considering that the Lakers somehow haven’t won back-to-back games since the first week of January.

And since it’s been nearly three months since the Lakers have taken consecutive games, it feels like a bit of a stretch to think lightning in a bottle will form now. Perhaps the best thing is to own this season as the failure it was—with no possible glass-half-full takeaways because of a last-second, feel-good run for execs to spin into running this back—and simply retool the hell out of this roster for 2022–23. It’s the only thing that makes sense.

Last week was a big one for the Nets, who, after months of hoping—and in recent weeks, venting—benefited when New York City cleared the way for star point guard Kyrie Irving to play in home games. (The Nets promptly lost their first home game of the season with Irving, dropping a Sunday contest to Charlotte, with whom Brooklyn is jockeying for play-in seeding.) My teammates Michael Pina and Howard Beck each wrote pieces looking at just how dangerous the Nets are, and essentially raised the question of what we can expect from them in a playoff setting. Is it ultimately too late for Brooklyn to pull it all together?

The surging Celtics, whom the Nets could end up playing in a first-round playoff matchup, reached the top of the Eastern Conference standings Sunday, but then got awful news the following morning. Robert Williams, who’d been fantastic in an expanded, starting role for Boston this year, tore his meniscus and could miss the remainder of the season. (ESPN’s Adrian Wojnarowski reported that Williams will miss at least several weeks, if he’s able to return at all during this coming postseason.) Few would suggest the Celtics aren’t a contender anymore. But his unique, ranged defensive ability from him as a big was one of the things that made Boston so tenacious on that end.

Separately, Rohan Nadkarni took a closer look at where this LeBron season—in contention for a scoring crown at age 37—ranks for James individually in the grand scheme of his accolade-filled career. Pina had a cover piece detailing just how special Rookie of the Year candidate Cade Cunningham has been. I took a short stab at analyzing how the Mavericks are an entirely different team with the addition of an efficient Spencer Dinwiddie.

And since we just concluded a big week in the college basketball world as well, I figured I’d toss in some great links from there. All of us, save for those whose alma maters were upset, enjoyed the improbable run to the Elite Eight by Saint Peter’s. Sports Illustrated‘s Kevin Sweeney dug in and wrote a Daily Cover piece on how Este was the closest thing we’ve ever seen to a Cinderella story. Similarly, The Athletic‘s Kyle Tucker went into detail about what it was like for coach Shaheen Holloway to recruit there. (In the piece, one of Holloway’s assistants said that coaches avoided showing recruits the team’s facilities during campus visits because of how shabby and rundown they were.)

Mirin Fader of TheRinger had an ace of a piece on Destiny Littleton and everything she’s battled through to still be standing as the biggest X-factor at South Carolina, the No. 1 overall seed in the women’s tournament. Lastly, our own Pat Forde wrote about Duke and how the storied program could be saving the best for last as its storied coach walks off into the sunset.

Last week, the Twitter account for the Phoenix Suns—who are awesome, and are going to own the NBA’s best record by one of the biggest margins in modern NBA history—pointed out that Devin Booker was averaging 25 points, five rebounds and five assistsa statistical threshold that has been good enough to earn each of the last 12 players with such a statline, and the league’s best record, an MVP award.

The suggestion, seemingly, was that if all these other guys have won the award when fitting this profile, Booker should win the MVP, too—or at least be given ample consideration for it. Sixers coach Doc Rivers, whose club had to gameplan for Booker recently, said as much. “He clearly is,” Rivers said of Booker being deserving of MVP consideration. “Anyone who says he’s not absolutely insane.”

While I’m not bold enough to say Booker doesn’t deserve to have his name mentioned—he does, and I’d argue he’s firmly in the top six or seven—the stat posted by the Suns made me think about something different. Mostly about the fact that we’re watching a vastly different sport being played than the one we watched 30 years ago, or even 15 years ago. And because of that, the way we think about and analyze benchmark counting statistics will likely have to change.

For starters, scoring is different these days, with more opportunities to do it because of the leaguewide pace being higher. It’s less of a battle to grab defensive rebounds, since opposing clubs are often more than willing to concede the glass in an effort to get back and stop clubs from scoring in transition. (These are all things we attribute to the massive increase in triple-doubles as well.) All of which is to say: Winning the award by barely hitting those totals—and helping lead the best team in basketball—may not resonate the same way it used to. Twenty years ago, back during the 2001–02 season, you had six guys averaging 25 points per game. Now, you have literally twice as many players hitting that threshold.

And while Booker has undoubtedly been a lifesaver for the best team in basketball as of late—he won this latest Western Conference Player of the Week while dominating to lift the shorthanded Suns—there’s a debate to be had about whether he’s ultimately the most valuable guy on his team. While he’s close to the 25-5-5 distinction, his counting numbers from him are ultimately in line with what he’s done in recent years, as are his efficiency ones from him. Many would say Chris Paul—who finished fifth in last year’s voting—is the most integral player, despite having just missed a month of action. And the advanced metrics would be on their side, given that Paul ranks 11th and 13th, respectively, in win shares per 48 minutes and value over replacement player, while Booker rates 33rd and 18th in those same metrics.

The truth is, it’s a difficult award for someone like Booker to win. He has a great ballhandler and a rock-solid roster around him. But in sharing the ball with one of the greatest point guards ever, it arguably caps how much playmaking he can do at times. That isn’t the case with someone like Nikola Jokić, who’s down Jamal Murray and Michael Porter Jr. this season. Joel Embiid was essentially forced into scoring more than he ever has with Philadelphia before James Harden came on board. Giannis Antetokounmpo has again put up gaudy numbers to go with some of the best defense any player has to offer. (Another point: The more-robust defensive data that these days exists helps us highlight the job elite defenders are doing; particularly for players who are rim protectors—further hurting Booker’s case in that way, perhaps.) Even with someone like Ja Morant, whose MVP case could be hindered by Memphis’s dominant 18–2 record in his absence, it wouldn’t be surprising if he finishes higher in the voting than Booker, if only because some analysts won’t have to think as hard about which player on the Grizzlies’ roster is most responsible for the team’s success.

The voting stuff is always strange. But given how closely we can parse certain cases now, it’s a safe bet to expect that the sorts of narratives and numbers that helped lift players to win the award previously won’t always be enough to claim it going forward.

Thanks for reading The Playmaker. Feel free to forward this email to a friend or tell them to sign up at SI.com/newsletters. If you have any specific questions, just reply to this email or send a note to [email protected] and I may answer it in a future edition.