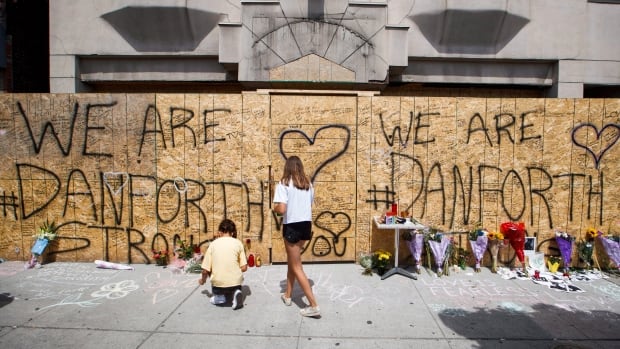 Torontonians directly affected by a deadly mass shooting in Danforth nearly four years ago say they welcome a new federal firearms bill that would freeze the purchase, sale, importation and transfer of firearms in Canada.

Members of the advocacy group Danforth Families for Safe Communities say the proposed legislation, House Bill C-21, provides relief. The bill was introduced in the House of Commons on Monday.

Group member Ken Price said Tuesday that he feels the victims’ voices have finally been heard. His daughter Samantha was shot in the hip at age 17. He said the bill has created hope because it is comprehensive.

“We feel there is significant progress on some issues and significant movement on behalf of the government. We are hopeful as a result of the announcements that they have made,” Price said.

The group has advocated for measures to improve community safety, including gun policy reform, since the Greektown shooting on July 22, 2018 that left two dead and 13 injured. Faisal Hussain used a Smith and Wesson 40 caliber pistol in the shooting before turning the gun on himself.

The bill does not ban firearms outright, allowing current owners to continue owning and using them, but seeks to limit the number that already exist in Canada.

The number of registered firearms in Canada increased by 71 percent between 2010 and 2020, reaching about 1.1 million, according to federal statistics. Guns were the most serious weapon used in most violent firearm-related crimes between 2009 and 2020.

Price said the group advocated in particular for the federal government to retain control over firearms regulation rather than give that power to municipal and provincial governments. It was the right move, he said.

“Most importantly, they are going to freeze the market by not issuing new licenses and so we see this as a phase-out of firearms in Canada… It allows for a more orderly transition to, say, a post – gun Canada”.

Price said the bill isn’t really a “win,” but outlines what needs to happen to improve public safety.

“What we’ve tried to do all along is just express what we went through as a motivation for the government and help explain to Canadians who haven’t been through this how it feels,” he said.

His daughter Samantha Price told the Canadian Press that she was “very happy” with the announcement, adding that “it would help us feel safer.”

“You want to feel safe in your own community.”

Group member Ali Demircan said Tuesday that the bill will not solve the problem of gun violence, but it is a big step forward. A bullet in the Danforth shooting grazed his back.

“We are aware that it is not the complete resolution of the problem of crimes with firearms,” he said. “Of course, we have more to do. In addition, this work, being part of the solution, helps us to heal a little.”

Demircan called the shooting a “life-changing event” that affected him and his family.

“It’s like living in fear that someone walking down the street might have a gun, hide it and do it again, but this legislation … will bring some relief to me and my family.”

Both Price and her daughter and Demircan were in Ottawa on Monday to hear Prime Minister Justin Trudeau speak on the issue at a news conference.

“I think the measures announced by the Canadian government were another solid step forward. This will freeze the number of firearms in the country, but it will also freeze them, I hope, in the city,” Tory said.

But the legislation does not sit well with everyone.

Tracey Wilson, vice president of public relations for the Canadian Coalition for Gun Rights and a registered federal lobbyist, said the proposed legislation puts too much emphasis on regulating legal firearms and not enough on controlling guns. unlicensed weapons.

“I see it as…a punch in the gut for the legal community of gun owners who have worked so hard to keep themselves safe for the last few decades, and just completely mislead Canadians into thinking they’ve done something credible.” . when once again they haven’t.