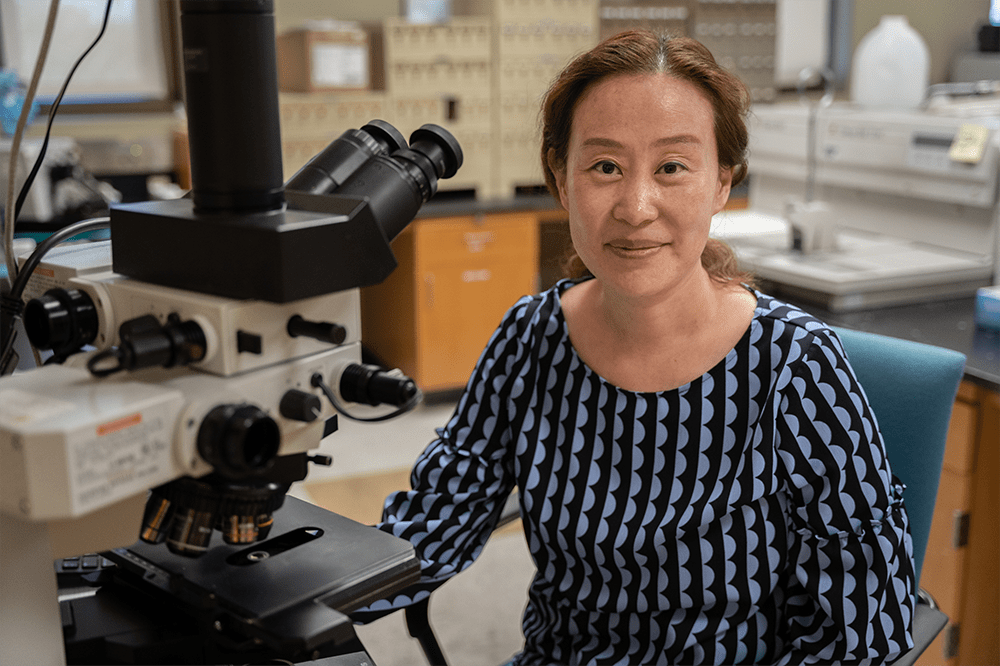 It takes a village to treat head and neck cancer effectively. That’s why Angela Yoon, DDS, is so excited about her new role at MUSC Hollings Cancer Center, which she started on March 1, as a cancer researcher focusing on prognostic biomarker and marker-guided immunomodulatory therapy. Yoon comes to Hollings from Columbia University Medical Center, where she’s served as a dentist, pathologist, researcher and faculty member for the better part of the last 15 years.

Biomarkers, or biological markers, are signs of normal and abnormal processes that take place in the body. As they relate to cancer, biomarkers can be produced by the cancer tissue itself or be a specific response of the body to the presence of cancer. The reason a biomarker is important is it can help to identify early-stage cancers, predict how aggressive a cancer might be or foretell how well a patient will respond to treatment.

Yoon brings her expertise in studying biomarkers and the roles they serve in cancer to the head and neck team at Hollings. “Histology only tells you if it is cancer or not. It doesn’t tell you whether that patient will survive five years,” she said of the study of cells under a microscope.

“For early-stage oral cancer without nodal involvement or distant metastasis, the five-year survival rate is about 60%. Where biomarkers come in is identifying the 40% of patients who are unlikely to survive five years,” she added, explaining that metastasis is the development of secondary malignant tumors not at the primary cancer site.

Studying biomarkers in head and neck cancer is important, especially in South Carolina where, Yoon said, rates of the cancer are higher than the national average. “Tobacco and alcohol use are leading factors for oral cancer, but we are also seeing an increasing number of young females who have never smoked being diagnosed with oral cancer.”

Yoon is particularly interested in prognostic biomarkers that could more effectively identify high-risk patients who would benefit from immunotherapy. It’s incredibly important to work as there aren’t effective neoadjuvant therapy regimens, such as chemotherapy, radiation therapy or hormone therapy, for oral cancer, Yoon said.

She’s currently leading a phase I clinical trial at Columbia that tests the impact that the drug Aldara has on patients with oral cancer. Yoon said that clinical trial will now be offered at Hollings.

“Aldara helps to activate toll-like receptor proteins in oral cancer cells, which essentially cause self-destruction of the tumor cells,” Yoon said. “It also serves as a way to activate the immune system to allow it to identify cancer cells and attack and kill them.”

Aldara is a topical agent that is currently approved by the Food and Drug Administration to treat skin cancer and melanoma. Yoon said participants in the head and neck study have had a 90% response rate with four-weeks of treatment. “One of the benefits of this drug is that it is topical, so it is easy to use. Participants simply apply the agent on the tongue or wherever their tumor is once a day. We also feel confident that this agent can decrease the chance of a recurrence after the tumor has been surgically removed by also treating the neighboring tissue.”

Providing less invasive ways to treat oral cancer is of particular interest to Yoon. In 2012, Yoon co-led a preliminary study that examined the affect that epigallocatechin-3-gallate (EGCG), an active component in green tea extract, had in high-risk oral cancer patients. EGCG was given to patients in the form of a daily mouthwash for seven days. Results of the study, while not statistically significant due to a small sample size, showed a reduction in proteins responsible for cell division and cancer growth.

“The green tea extract we used was the equivalent of drinking 11 cups of tea at the same time,” Yoon said. “It is very concentrated, and some complained that it tasted bitter. But the biomarkers do show some change that could possibly prevent cells from progressing to cancer.”

Yoon said the first-of-its-kind study could provide oral cancer patients with a noninvasive way to prevent, hopefully, a recurrence.

Yoon’s out-of-the-box way of approaching cancer prevention and treatment is one of the reasons she is excited to join other head and neck cancer experts at Hollings. “Hollings is a great example of multidisciplinary collaboration, which is so essential. For my current clinical trial, I’m working with oncologists, head and neck surgeons, biostatisticians and basic science researchers. It takes involving experts in a multitude of fields to really make a clinical trial work.”

Yoon earned two master’s degrees from Boston University – one in public health and the other in medical science. Afterward, she attended dental school and completed her residency at Columbia University Medical Center.

She’s excited to join the multidisciplinary team at Hollings to lead more research to improve treatment and outcomes for cancer patients in South Carolina.