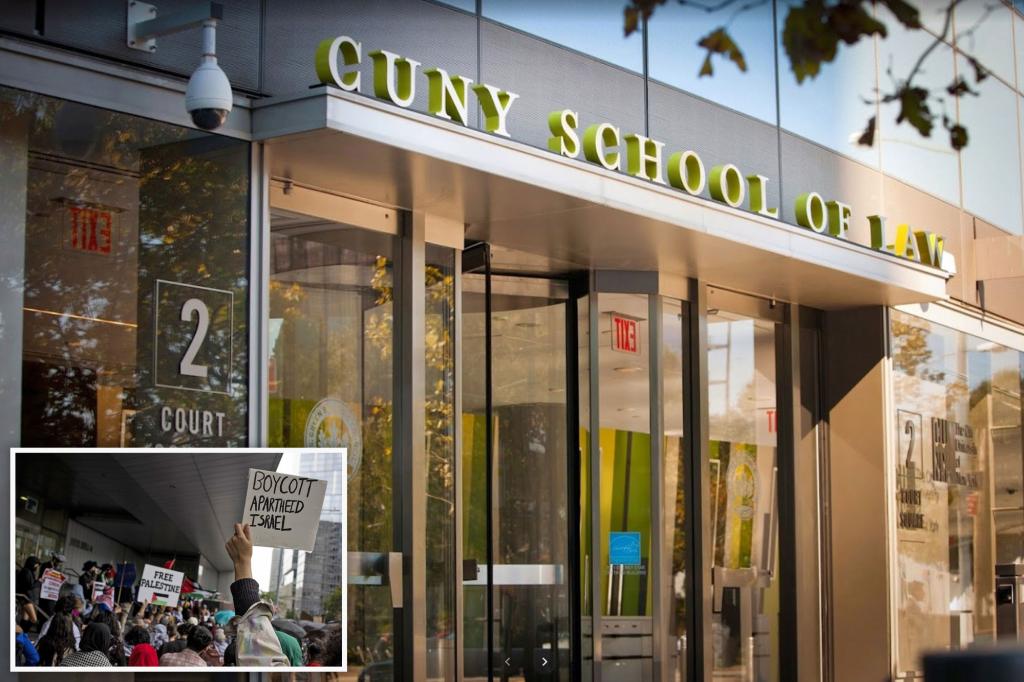 The New York City Council is launching an unprecedented investigation into alleged anti-Semitism at CUNY and other Big Apple college campuses, The Post has learned.

The Council’s Committee on Higher Education will hold an oversight hearing called “Examining Anti-Semitism on College Campuses” on June 8.

It comes after CUNY Law School faculty endorsed the pro-Palestinian boycott, divestment and sanctions movement against Israel, which sources say was the impetus for the hearing.

“The adoption and normalization of BDS by CUNY students and faculty has fostered an extremely hostile campus environment that has resulted in the most blatant forms of anti-Semitism that are becoming all too common in our city,” said the Bronx Councilman. Eric Dinowitz, who chairs the higher education committee as well as the council’s Jewish committee.

“It is crucial that the Council ensure that our CUNY system, a national model for higher education, does not become the only Jewish state in the world and, in turn, exclude our Jewish students and residents,” he added. Dinowitz.

The councilman said there has been an upward trend in anti-Semitism on college campuses across the country and that “CUNY is no exception, having had multiple disturbing incidents of bias and, in many cases, a culture of anti-Jewish sentiment. that demands the attention of the Municipal Council”.

The recent law school faculty council vote backing the BDS movement, which Israel’s supporters say stinks of anti-Semitism, was the last straw for the council and prompted the investigation, according to higher education sources.

“This is bad for CUNY Law School. CUNY will pay for this,” a higher education source said.

Brooklyn Councilwoman Inna Vernikov, a Ukrainian-born Jew and staunch supporter of Israel, is the ranking Republican on the higher education committee. Last week, she raised $50,000 in funds for CUNY Law School to do pro bono work in her South Brooklyn district, as punishment for the anti-Israel vote.

The union leader representing CUNY faculty, the Professional Staff Congress, said he intended to testify at next month’s hearing.

The PSC angered Israel’s supporters last year by passing a resolution condemning the country for attacks on Palestinians and raised the possibility of supporting the BDS movement in the future. Some teachers withdrew from the union in protest.

PSC chairman James David, who opposed the resolution at the time, said: “Our union actively opposes anti-Semitism and believes that political criticism of Israeli policy is not inherently anti-Semitic.”

“We fully support the right of our members to present political arguments on foreign and domestic issues, including on any aspect of the Israel-Palestine issue.”

The city’s private universities may also be discussed, along with CUNY, at the hearing.

In 2020, New York University resolved a complaint filed by a student after the school presented an award to Students for Justice in Palestine, an organization that has been repeatedly accused of anti-Semitism. The agreement explicitly cited then-President Trump’s December 2019 executive order adding anti-Semitism to Title VI of the Civil Rights Act of 1964.

A spokesperson for Dinowitz said the councilman’s office is still in the process of confirming witnesses, but the hearing will definitely include representatives from CUNY administration, faculty and students.

The dispute between Israel and Palestine has raged between faculty and students on various City University of New York campuses over the past decade.

Students on both sides of the issue claim they have been subjected to bullying and discrimination, and CUNY even commissioned a study of bullying claims against Jewish students, though it concluded that much of the offensive language spewed out is protected by free speech.

CUNY Chancellor Félix Matos Rodríguez was also forced to respond to letters complaining that CUNY has become a hotbed of anti-Semitism, including one from former trustee Jeffrey Wiesenfeld.

“Let me start by reminding you that I am on record in rejecting the original student resolution on BDS,” Rodríguez wrote May 28 in an email response to Wiesenfeld.

“I have also stated that CUNY does not support and, to be clear, cannot participate in BDS activities, and must divest public funds from any company that does,” he added, saying the move was “contrary to the core mission of a university to introduce students personally and academically to a world that may be very different from their own, particularly through international exchange programs, and to encourage them to participate in a variety of opinions and beliefs”.

The chancellor went on to say that he and 12 CUNY university presidents and deans recently participated in a “Students as Bridge Builders” visit to Israel, organized by the New York Council on Jewish Community Relations. They visited the Hebrew University, Tel Aviv University and Sapir College and also met with the former Palestinian Minister of Higher Education.

Rodriguez, who signed the email with his nickname “Felo,” also referred to outrage that pro-Palestinian activist Nerdeen Mohsen Kiswani was asked to speak at the recent graduation ceremony of the Law School of CUNY, saying it was chosen by the students, not the university.

“They speak for themselves, not for the University, and the opinions they express are their own,” Rodríguez wrote.

Wiesenfeld responded, “Felix, would black, Hispanic, or Asian students be allowed to be subject to exhortations for murder by their same ethnicity?”