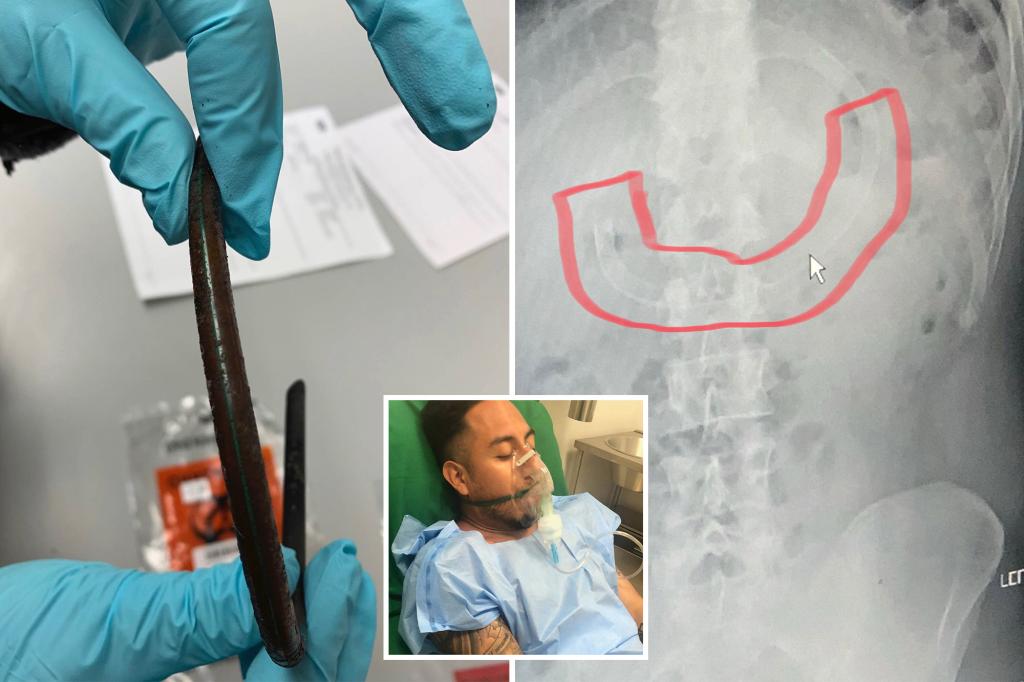 His life almost went down the tubes.

Doctors at Elmhurst Medical Center left a 10-inch breathing tube in a Queens man’s body, never realizing the mistake or recovering it for another 30 years, according to a lawsuit.

“I feel like… a little angry. Just for the simple fact that they left this inside of me,” former patient Rene Remache, 39, told The Post. “It could have been worse than the result. I thank God I’m still here. I have a beautiful daughter that I might not have been raising.”

The twisted story began when Rivet fell out of a second story window in April 1989 when she was just 6 years old. At that time he lived in Woodside with his grandparents who emigrated from Ecuador.

He was rushed to Elmhurst Hospital with a skull fracture and placed on a ventilator and breathing tube. His medical records from the time report that he was “agitated” by the tubes and that he was “pulling” them. Hours later, those same records say he “extubated himself.”

Rivet says it’s the only time in his life he’s received such a tube, and his lawyers are convinced he swallowed some or all of the device while at Elmhurst, and his doctors didn’t notice.

Over the years, Rivet says he has suffered from intermittent stomach ailments, often receiving treatment at Elmhurst, but without success. Rivet, who has long relied on Medicaid for medical coverage, said the hospital never ran any tests that might have discovered the tube during her several trips to the emergency room.

“I had a couple of visits to the hospital due to my stomach, vomiting and pain and I really didn’t know where it was coming from and finally decided to treat it as a normal stomach problem and stop going anymore. . Nobody could tell me what it was,” she said.

Things came to a head during a family trip to Mexico in 2019 when Remache says she started feeling worse than usual.

“It was a weird feeling in my chest and throat area that I had never felt before and I felt like there was something stuck there, something that really bothered me to breathe,” he recalled. A Mexican clinic said he had bronchitis and sent him home with antibiotics, but the problem persisted.

When he returned to New York, a CT scan at Mt. Sinai Medical Center finally found the culprit: the old tube that rested inside along the greater curvature of his stomach. Rivet said that he was surprised.

“I was speechless. I had no idea how she got there,” Rivet said.

The endotracheal tube was finally removed by surgeons at Maimonides Medical Center on June 24, 2019. Rivet had to sue to have the recovered tube turned over by the center so he could use it as evidence in his negligence lawsuit against Elmhurst and its owner. , Health and Hospitals of New York City.

In legal documents, the city insists the tube found in Rivet in 2019 is different from the one that would have been intubated as a child in Elmhurst.

Health and Hospitals declined to comment but has repeatedly refused to settle the case, said Peter Traub, an attorney for Rivet. A trial date has been set for October 11.

Rivet says he plans to frame the tube when the litigation is over.

“I’m going to keep it as a memory of something that could have ended my life but didn’t and I’ll tell my story for my daughter,” she said.