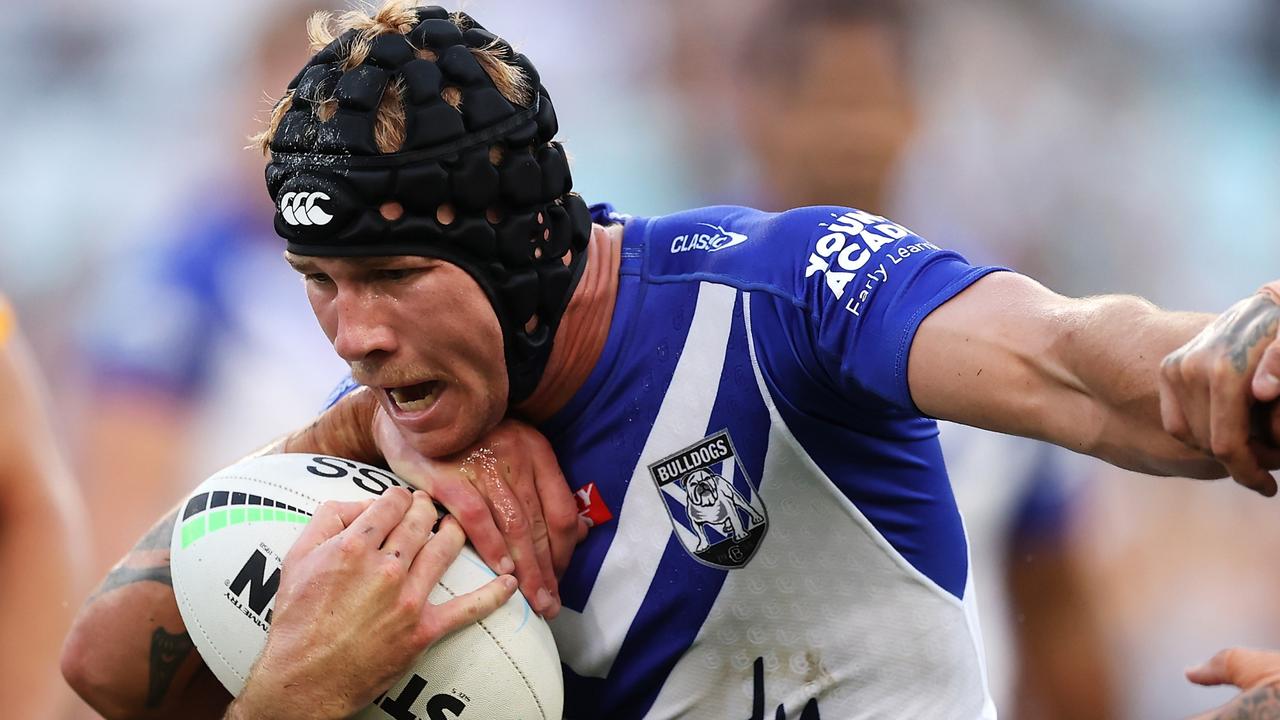 Matt Burton has gone into his attacking shell since joining the Bulldogs, a season after being named in the Dally M Team of the Year.

Starting statistics have revealed Matt Burton has gone into his attacking shell since joining the Bulldogs this season.

Burton won a premiership in the centers at Penrith last season and was named in the Dally M Team of the Year.

But a switch to his preferred position of five-eighth at Canterbury has seen his attacking stats plummet.

The Bulldogs spent almost $2 million on improving their attack but they’re in danger of turning one of the game’s most exciting playmakers into a one-dimensional kicking machine.

Stream every game of every round of the 2022 NRL Telstra Premiership Season Live & Ad-Break Free In Play on Kayo. New to Kayo? Try 14-Days Free Now >

Burton doesn’t have a line break, try or try to assist his name since becoming a Bulldog and has gone from kicking 3.5 times per game at Penrith to 13 at his new club.

Fellow star recruit Josh Addo-Carr has also struggled to replicate the success he enjoyed at The Storm where he scored, on average, in 81 per cent of his games.

Addo-Carr is yet to score this season for the Bulldogs who are languishing in 14th place on the ladder after winning just one game in four rounds.

“I think both players would be having a certain amount of regret about coming from great systems in Melbourne Storm and Penrith Panthers into a club that has won one game,” Phil Rothfield said on Big Sports Breakfast.

“I don’t think their performance was good enough yesterday (against Melbourne). You look at the pack of forwards they put on the park with (Josh) Jackson, (Tevita) Pangai Junior, Paul Vaughan, (Luke) Thompson, there’s a hell of a lot of experience there.

“I don’t like bringing up coaches’ names every week but the pressure is building on Trent Barrett, they’re not playing good football, lots of comments about Matt Burton’s game.

“He is a super player and look I don’t think he’s that far off being a top 10 player in the game but he’s struggling at the moment.”

Bulldogs great Michael Ennis believes Burton needs better support from his halves partner, who has been Brandon Wakeham for the past two games.

“Matt has had to step up to do a lot of those yarding kicks,” Ennis said.

“But he really needs a halfback to take control of the attacking kicks to allow him to be able to be a threat with the footy by running on play four with some sort of run shape.

“For the Dogs at the moment, because they haven’t got a traditional No.7, Burton can’t be scheming on plays like three and four because he knows he will have to get them out of trouble with his boot.

“Matty looks like he is thinking he needs to be in position to kick the footy rather than ready to pull the trigger in attack.”

Rothfield believes it’s time to give Kyle Flanagan – who is earning $450,000 a season playing in reserve grade – a crack in the No. 7 jersey.

“Halfback is obviously the problem at the Bulldogs, they’ve tried Brandon Wakeham and I don’t think it’s worked out,” he said.

“They’ve got a kid in the NSW Cup called Kyle Flanagan who has at least had a couple of years first-grade experience and I think Trent Barrett and Phil Gould in the not too distant future are going to have to turn to him.

“At least give him an opportunity to see if he can get this football side performing.”

Originally published as ‘Would have a certain amount of regret’: Startling statistics show Burton’s decline at Dogs