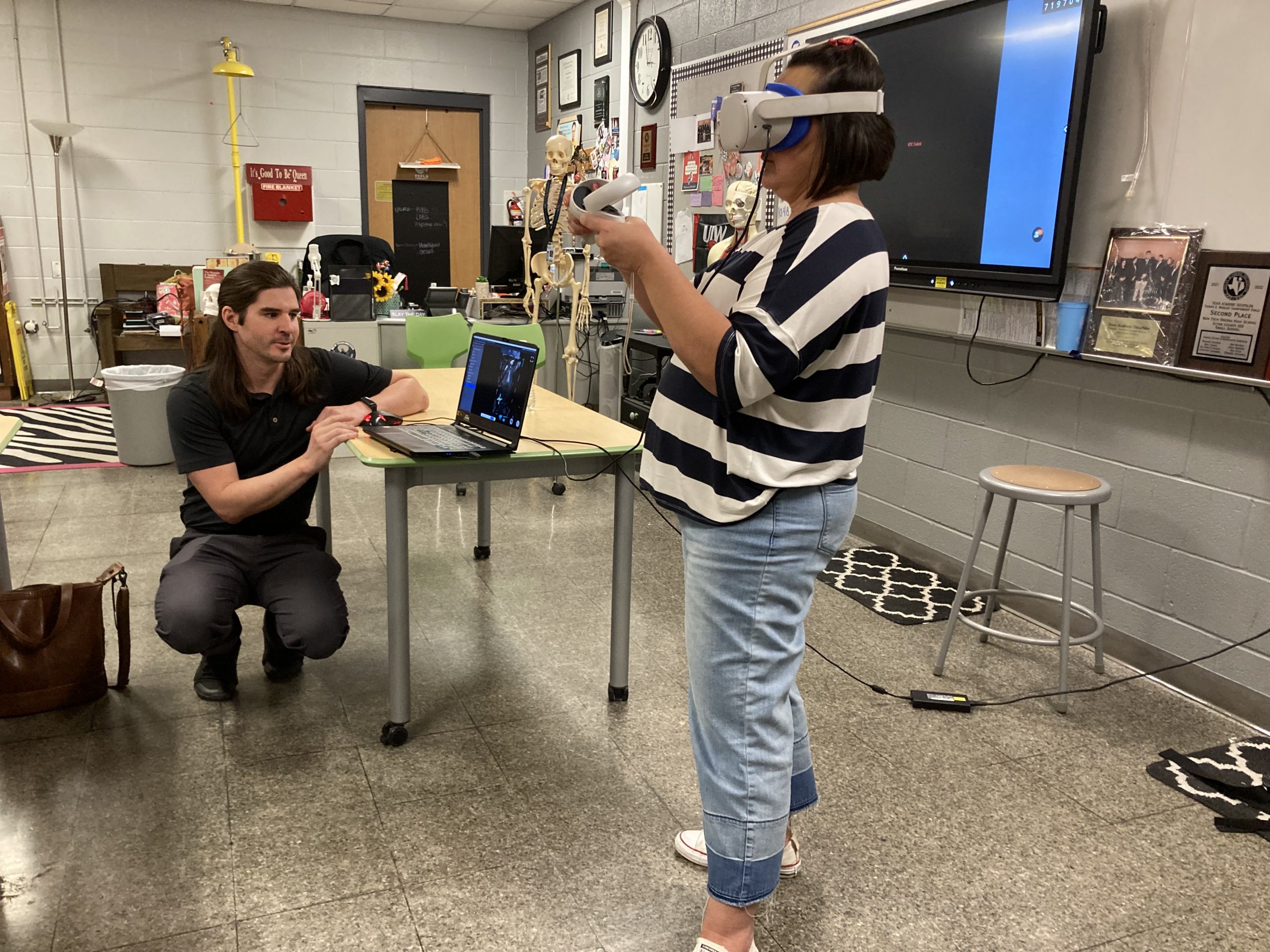 It wasn’t your ordinary professional development.

On May 26, eight career and technical education teachers observed human hearts, brains, and knees, a baby chameleon, and a zebrafish, to name a few.

A second group of 16-18 teachers from all subjects at NTO participated on May 27.

The goal was to show how cutting-edge technology can be used to engage students and introduce them to careers they had never thought of before.

“We have teachers here today who are learning how to integrate this into learning about cells; learn about the brain So now they can…use this technology tool to integrate that into their classroom,” said Director of Innovation Jason Osborne. “At the same time, students have real data that they’re looking at.”

“This is a personal learning opportunity for health sciences instructors. They will learn how to use virtual reality and they will also learn how to manipulate data to prepare for the fall,” added Osborne. “This is an exciting expansion of virtual reality in the district. We believe that the Ector County Independent School District is at the forefront when it comes to incorporating sophisticated technological advancements into virtual reality.”

Osborne found himself searching for about a year and a half before finding Morehead and syGlass.

“What I wanted is an opportunity for kids to manipulate scientific data in a more realistic way and also in a technology that they want to be in,” Osborne said.

He didn’t find what he was looking for until around 2018.

“I was presenting at UT Austin at a neuroscience conference. I was at that conference because we were starting to talk about starting a neuroscience course in the Ector County Independent School District and lo and behold he (Morehead) gave a talk on this virtual reality tool that they developed…” Osborne said.

Osborne reached out to the company and asked if it would be willing to partner with ECISD, teachers and students to test software designed for science and turn it into an educational tool.

The company agreed and now ECISD has districts across the country that want to replicate what is being done here.

Teachers can now talk to experts in a variety of scientific and medical fields, for example, and get professional learning embedded in the job.

Teachers in any content area can use virtual reality in their classes and show students that it can be applied in the real world. Professionals and professors who are experts in their field can also record videos that students can watch.

Osborne added that teachers can expand on that.

“I think it will be exciting for teachers because they don’t have to be content experts. They can facilitate the information and they can learn together with the students,” she said.

With some of the really complex anatomy and science, they will now have support.

“They have an extension of their classroom through these professionals in the field. It also bridges the gap between K-12 education and higher education,” Osborne said.

He added that it creates more natural pathways through partnerships, so students may be more willing to move on to post-secondary education.

“Just like any of us, we don’t know what we don’t know until we’re exposed to something. The fact that we’re exposing students to a whole new world of possibilities, they can now create so many career paths because now they see there’s so much more out there. Through virtual reality, it gives us that extra edge to give them access to something they didn’t even know existed,” Osborne said.

“I think it actually gives kids an opportunity to…explore the organs of the body. It’s different when it’s on the model. When they can manipulate it and turn it around, I think it would be great for them to learn it that way,” Portillo said.

“They are more practical, this generation… They have to play it; feel it It would be great for them to separate it and manipulate it, or separate the organs and say, okay, now put it back. Where are you going? It would be a fun thing to use in the classroom,” she added.

Morehead said this was the first time he had held professional development sessions for teachers.

For the past seven years, the software has been used by neuroscientists and structural biologists in basic scientific research, he said.

“Our customer base is not really the master. It’s actually just Odessa. Jason saw the potential, he brought it here and this pilot has proven that in the educational arena and now the company’s thinking about where we need to go and what we need to do has completely changed after this pilot,” said Osborne.

He said the technology has been around for a couple of years.

“We’ve added some things that are more useful in science communication, but it’s only useful if people can implement it on the ground. By coming out here and showing teachers what’s possible, this is the first step in getting it actively used in the classroom,” Morehead said.

Neuroscience is one of the fastest growing scientific fields.

“…There is always a demand for cutting-edge research. But syGlass is really more than a tool for neuroscientists. Since we can show macroscopic anatomy; we can show anatomy compared to animal scans; we can show cell biology. We even have some plans to teach different math concepts within virtual reality. So it’s not just about neuroscience at all, although it’s a great tool for displaying neuroscience data sets,” Morehead said.