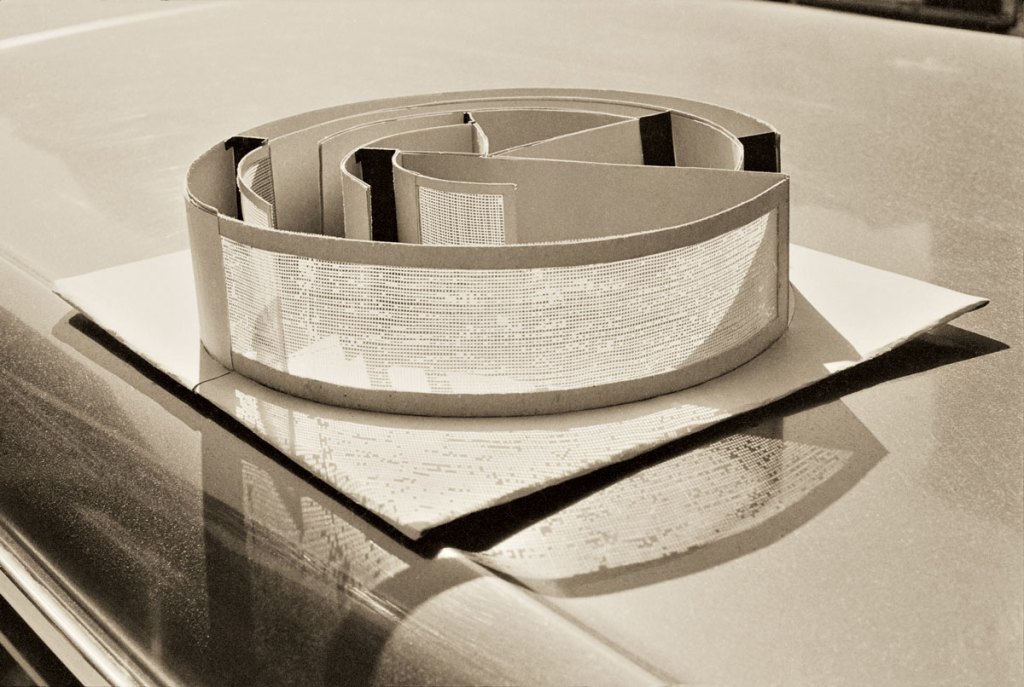 When he arrived in New York in the early 1970s, the late Brazilian artist Hélio Oiticica dreamed of creating a large-scale public outdoor installation for the city. Situated outside a traditional arts institution, the work was meant to challenge what art could be by creating a space that actively engaged the public inviting them to participate.

Oiticica, who died at the age of 42 in 1980, was never able to produce this work, entitled Underground Tropicalia Projects (1971), the bureaucracy of New York City proves insurmountable for the acclaimed artist. He even created several scaled-down versions of the original multi-level structure in hopes that he could somehow accomplish the feat.

In the 40 years since his death, the work has become legendary and was a memorable inclusion in the 2016 and 2017 traveling retrospectives of the artist’s career, which made stops at Pittsburgh’s Carnegie Museum of Art, the Art Institute of Chicago and the Whitney Museum in New York.

Now, 51 years after its original conception, the reduced circular iteration, PN15, will eventually be held in another New York City park, the Socrates Sculpture Park in Queens. The installation will be on view from May 14 to August 14, and visitors will be able to enter on Fridays from 5:00 p.m. to 7:30 p.m. and on Saturdays and Sundays from 11:00 a.m. to 5:00 p.m.

Built to scale, the work marks Oiticica’s first major outdoor project completion in the U.S. The project is being done in conjunction with Americas Society on the Upper East Side and Projeto Hélio Oiticica, the foundation established by the two brothers of the artist. the year after his death. The Lisson Gallery, which represents Oiticica’s heritage, has also provided support from him. (Lisson opens a studio exhibition of Oiticica’s work, curated by Ann Gallagher, at her London space this week.)

He added that Socrates’ election in the New York of 2022 is the “perfect” election. “If you tried to do that today in Central Park, it would be completely sterilized because Central Park is a different Central Park than Oiticica was referring to,” Iglesias Lukin said.

The idea of ​​trying to manifest PN15 it came about through an exhibit at the Americas Society, which since it was founded by David Rockefeller in 1965 has acted as a connector for Latin American artists in New York, often providing them with travel grants or exhibits. A mockup of the original Underground Tropicalia Projectsas well as sketches for two reconfigured versions, PN14 Y PN15, were shown in Part I of Americas Society’s “This Must Be the Place: Latin American Artists in New York, 1965–1975”; Part I closed in December and Part II will run through May 21.

Iglesias Lukin said the exhibition offers a “rereading of American art from the 1960s and 1970s through the lens of immigrants, in this case Latin American immigrants. We need to start questioning the extent to which New York has become the cosmopolitan hub that it is without immigrants. How do you explain the neo-avant-garde without all the artists that came from all over Europe, Latin America and Asia?

She sees Oiticica and the artists he was connected with as central to this rethinking, adding that they “came to New York at a time when Latin American art, as a term, didn’t even exist and they totally invented it here.”

When in talks with the Oiticica estate to secure loans for the exhibition, Iglesias Lukin said he had “fantasized” about trying the project for years, but it was through his talks with the estate that he realized that they were just as passionate about finally realizing the large-scale installations of Oiticica. He approached Jess Wilcox, Socrates’ curator and exhibition director, less than a year ago, and they got to work.

Oiticica left copious notes, along with scale models and detailed instructions on how to make his works. Underground Tropicalia Projects was no exception. He published an explanation with detailed renderings of the project in a 1972 edition of Changes magazine, which also featured interviews with musicians like Don McLean and Alice Cooper. “For someone to one day make them,” said Kaeli Deane, a Lisson director who works closely with the artist’s estate. She added that “he went to great lengths to try to make this happen. This was a great dream of Hélio”.

Wilcox added: “I was laying the groundwork for someone else to take it and create it.”

The works in this series were always intended to be collaborative and would feature the work of other artists, including filmmakers and musicians, within each of them. Penetrable space, so called because viewers were meant to penetrate the spaces. For its presentation at Sócrates, it will include a film program of historical works as well as more recent pieces that are still in development.

One of those works will be by Oiticica, as a way to further evoke the artist’s original intentions. Agrippina is Rome–Manhattan (1972) stars Mario Montez, a Warhol superstar who also appeared in several Jack Smith films, and was the only film Oiticica made and exhibited while living in New York. In his original conception of the installation, Montez would have created a live performance in PN15but the New York underground icon died in 2013.

But a key component of Oiticica Underground Tropicalia Projects it is something that Socrates cannot plan: the interactions of the park. After all, it’s a place where locals walk their dogs, go for a run, hang out with friends, practice dance moves, and much more. It’s part of his idea of ​​”creleisure,” the term he coined for creative leisure.

“He had always talked about this work as a place for planned performances and for spontaneous ‘self-performances’. We have spontaneous auto performances in the park every day, that’s the beauty of public art,” said Wilcox. “He was very interested in the idea of ​​the experimental. We have the plans, but until it is created there are parts that we will not know.

Deane added, “For him, it was all about the audience, the work comes alive through people.”

When Oiticica arrived in New York in 1970, his star was on the rise internationally. In Brazil, he was “acclaimed as the head of a new generation of avant-garde artists,” not only for his experiments in neo-concrete art but also for Tropicalia (1967), his first large environmental installation in which visitors take off their shoes to walk through a space covered in sand and full of flora and other elements.

Tropicalia the year it was made was shown at the Museu de Arte Moderna in Rio de Janeiro. It started an entire artistic movement in Brazil (also called Tropicalismo) that became even more famous when the musician Caetano Veloso used it as the title of a song that essentially became an anthem against the Brazilian dictatorship.

In 1969, Oiticica presented another large installation similar to Tropicaliatitled Eden, at London’s Whitechapel Gallery, and the following year was included in curator Kynaston McShine’s landmark exhibition “Information” at the Museum of Modern Art in New York. With these important samples he was able to obtain a Guggenheim Grant that allowed him to move permanently to New York in 1971, where he remained until 1978.

Although Oiticica had obtained significant institutional support in three countries, he found that working within that structure was a limitation, both conceptually and in the way he was able to reach his audiences. She soon proclaimed that the “museum is the world” and thus set out to create art outside the traditional framework of art institutions. Hence his idea of Underground Tropicalia Projects was born.

It was his idea for a massive multi-level installation to be installed in Central Park, which he called tropicalia Underground Projects, who had helped Oiticica obtain the Guggenheim Fellowship. A forerunner of Underground Tropicalia Projects came in one of his first installation projects. Conceived when he was 24 but never realised, hunting dog project (1961) was configured as a labyrinthine public garden of sand and pebbles where open-air concerts could be held.

But obtaining financial support, as well as permits from the city, an institution in itself, to carry out the project turned out to be beyond the artist’s reach. For comparison, Christo and Jeanne-Claude’s The doors The Central Park project was originally conceived in 1979 and was only realized in 2005.

“There was a set of institutional conditions, with respect to Brazilian art and American art, that prevented an artist like Oiticica from developing to his full potential,” Iglesias Lukin said.

That eventually led Oiticica to downscale the Underground works on various models, hoping to actually realize the project, of which PN15 it is the third such iteration, which was also not done. The first of his major works to be executed posthumously was from the later series “Magic Square” (1977), which was built some 30 years later at Inhotim, the huge sculpture park in Brazil founded by collector Bernardo Paz.

Given all of this history, Wilcox sees this presentation of Oiticica’s work as more relevant than ever, especially as her work has been influential for generations of artists. “In terms of art history, I think for a lot of people seeing a work by Oiticica in Socrates makes sense because there are a lot of artists showing here that they somehow follow his legacy, even if they don’t know him. she said. “This is a missing piece in that art historical narrative because Oiticica is not recognized in the realm of everyday public art.”

Oiticica believed that it was the artist’s job to bring viewers of his work, whom he called participants, to “a state of invention,” as he put it in 1979, or a way of “encouraging individuals to exercise confidence in their own intuitions and aspirations,” as curator Lynn Zelevansky writes in her catalog essay that accompanied the traveling retrospective. The art that she made was only complete with people interacting with it.

It is that spirit that must guide this realization of PN15 in Socrates. When Wilcox was reviewing his notes for Underground Tropicalia Projectshe recalled seeing a comment he left at the bottom of the page: “Experiment is the only axiom.”