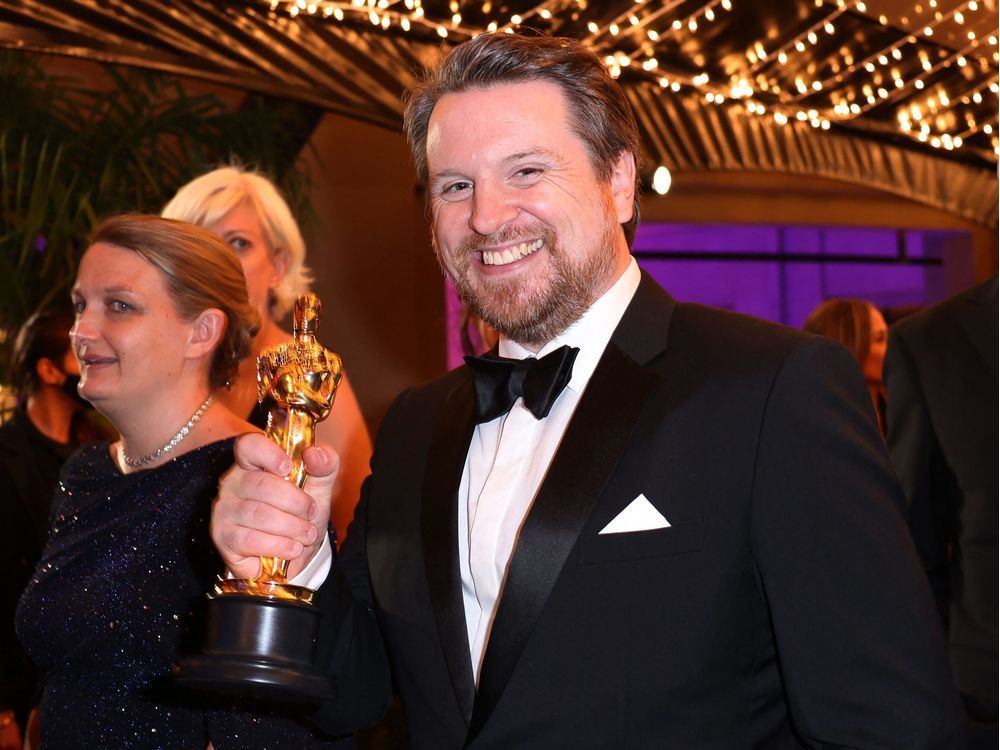 Reviews and recommendations are unbiased and products are independently selected. Postmedia may earn an affiliate commission from purchases made through links on this page.

Montreal director Denis Villeneuve’s Dune scored the most hardware at the Academy Awards on Sunday night.

That win made it Oscar No. 2 for Vancouver based Double Negative (DNEG) VFX supervisor Tristan Myles. Myles, who previously won in 2019 for the film First Man, was joined on the Dolby Theater stage to collect the award by fellow DNEG VFX supervisors Montreal’s Brian Connor and Paul Lambert, based in LA and London respectively, and special effects supervisor Germany’s Gerd Nefzer .

After the win Myles hit some parties before coming home to Vancouver Monday. Postmedia managed to get a few questions in, yes, the slap heard around the world is one of them, before the newly minted Oscar winner had to get back to work.

Q: How does the second Oscar feel in comparison to winning the first one?

TO: Honestly it felt just as exciting and nerve wracking as the first time around — you never really know how everyone is going to vote, but hearing your name read out the second time around is just as exhilarating!

Q: Is there an actual career bump after winning one?

TO: I don’t know about a career bump, but it certainly doesn’t hurt your career winning the award.

Q: Did the overall Oscar experience feel any different this time around?

TO: Overall, yes — mostly because of the strict COVID protocols, some things were missing/not available because of the restrictions but those protocols were definitely necessary and didn’t mar the proceedings. Other than that, the format was pretty much the same as the last time we (Myles and his wife Kristy) were there so we knew what we were doing a bit more this time around.

Q: What would people be surprised to learn about the Oscar ceremony experience?

TO: The Oscar is your ticket to most of the after-party events, and you sometimes get to skip the queues!

Q: Who did you hang out with after the awards? Like, do the VFX guys all stick together?

TO: I think we mostly stuck together yes, but what was nice was that Dune as a whole won quite a few categories so we got together with the other winners at the Vanity Fair after party and had a great time.

Q: Did you see director Denis Villeneuve after the awards? If so, what did he say to you?

TO: I saw Denis after we were let back to our seats having been backstage yes. Denis and his partner Tanya were down near the stage, so I got to pass them and thank them both for the amazing opportunity and experience working on this Sci-Fi Epic. Denis congratulated me and was genuinely happy that we won the VFX category, he really is such a nice guy.

Q: Who did you call first after winning?

TO: I guess I didn’t really call anyone as my family are in the UK so were fast asleep, but there were lots and lots of messages across various social media platforms that I replied to — my phone exploded with messages as the winner was announced.

Q: What parties did you go to?

TO: So, we went to the Governors Ball right after the ceremony, it’s in the same building (the Dolby Theatre) on the top floor. Here there was a DJ playing music, a dance floor and lots of tables with food and an open bar. It’s up here that you get your engraving put on your Oscar statue, and if there were multiple people who received an award for the same category, your name is the first one on the engraving which is a really nice touch.

After this party we went on to the Vanity Fair party at the Wallis Annenberg Center in Beverly Hills, where entry was ticketed, or as I previously mentioned, with Oscar in tow.

Q: What was it like in the theater right after Will Smith slapped Chris Rock?

TO: I think most people were in shock, there’s always an element where you think that it might be staged but that quickly faded after the outburst. Overall, it was a state of disbelief and shock in the audience

Q: Was that insane event the topic of discussion went you were out after?

TO: It definitely came up, but it wasn’t dwelt upon too much as a celebration was very much the theme of the night after the awards. I hope that Will and Chris were able to sort it out after the event.

Q: You had to come back to Vancouver the day after the awards to work. What are you working on, and does it have Oscar hat trick potential?

TO: You never want to second guess anything really, the team is working very hard on finishing up on a current movie project for Netflix scheduled for release later in the year I believe.

Sign up to receive daily headline news from the Vancouver Sun, a division of Postmedia Network Inc.

The next issue of Vancouver Sun Headline News will soon be in your inbox.