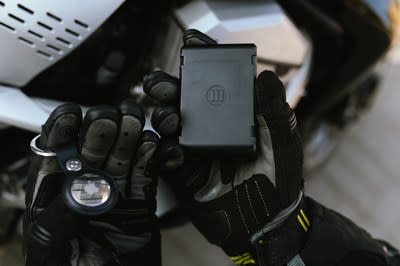 VILNIUS, Lithuania, March 29, 2022 /PRNewswire/ — Monimoto, maker of Europe’s fastest growing anti-theft GPS tracker, recently published a report detailing the challenges of using Apple’s AirTag to secure a motorcycle versus a GPS-based tracking device such as the Monimoto 7. The Apple product has recently been criticized for its use in stalking or following individuals against their will. Apple’s mitigation procedures for this issue have been added for reasons to be skeptical of its ability to protect a motorcycle, bicycle or automobile.

AirTag’s reliance on other devices for location and communications is why riders should select a different solution.

“Apple is wise to take steps to stop the use of AirTags as a way to stalk someone,” said Andrius “Bruno” Rimkunas, a motorcycle security expert and co-founder of Monimoto. “However, these procedures, and the AirTag’s reliance on other Apple devices for location and communications, are exactly why motorcycle owners should select a different device…one that provides immediate alerts and ensures owners never need to worry about losing the motorcycle they love .”

Apple AirTags use Bluetooth technology to connect to any Apple device in a nearby area. When an owner realizes that his or her protected item is missing, the owner can request a signal from the AirTag to provide its location. This could be hours after a theft occurred and the protected vehicle could be far away from its original location. To avoid stalkers from using AirTag, Apple has programmed the product so anyone with an iPhone can see if an AirTag is nearby, which alerts thieves to find and remove the tag from a vehicle they have stolen. In addition, after a specified amount of time, the AirTag will emit a sound, further alerting thieves that they are being tracked.

In contrast, GPS tracking devices like the Monimoto 7, will immediately alert owners that their motorcycle is being tampered with. In one recently documented case, a Monimoto user in New York City was able to disrupt a potential theft by checking on his bike after receiving an alert. Almost all GPS tracking devices will continually update the user on the device’s location, allowing users to work with local authorities to assure a quick return of their motorcycle. GPS trackers generally don’t have LEDs or make sounds, so they don’t alert thieves that they are being tracked.

The Monimoto 7 stands out among GPS trackers, in that it uses both global positioning from viewable satellites and also 4G/5G cellular signals to identify the specific location of the bike and to communicate with the owner by phone calls and notifications on a smart phone. The device is not connected to a vehicles electrical system, which means it continues to operate for 12 months on its internal battery, even if the motorcycle’s battery is disconnected. Monimoto’s weatherproof case makes it perfect for the rigorous environment of a motorcycle. Monimoto’s rating on Trust Pilot, the Apple Store and Google Play store are tops in this field.

“AirTags are wonderful for finding lost keys or a backpack. But our advice to riders is that a locked motorcycle and a high-quality GPS tracker, like our Monimoto 7, is the best way to protect the investment they’ve made in their motorcycle ,” continued Rimkunas. “If you are in an area where motorcycle theft could happen, these two deterrents should help you rest easily and know that your bike will be waiting for you when it’s time for your next ride.”

The report is posted to Monimoto’s website and includes links to source material from Apple and other news sources to explain AirTag features and anti-stalking measures, as well as reference materials for GPS trackers.

Monimoto, founded in 2016 in Vilnius, Lithuaniadelivers “peace of mind” for owners of collectible, custom and high-value motorcycles and e-bicycles.

The Monimoto 7 is more than just a smart, anti-theft GPS tracker for two-wheelers. It’s small, easy to install and uses the latest eSIM, 4G/5G IoT connectivity combined with a sophisticated backend and mobile app. It comes with an embedded, international eSIM card and is powered by two autonomous, long-life batteries, so it won’t drain the battery on a motorcycle or e-bike and never falls victim to a thief who cuts the battery cable. The device calls the owner within minutes when unauthorized motion is detected. Monimoto’s portfolio already includes dozens of recovery cases. Service is free for two months with device purchase and is $49 per year after that.

The company has enjoyed increasing revenue growth of 100% year over year for three consecutive years with projected revenue in 2022 of $5 million.

Monimoto 8, expected in Q2 2022, is specifically designed to meet the needs of high-end bicycle and e-bike owners.