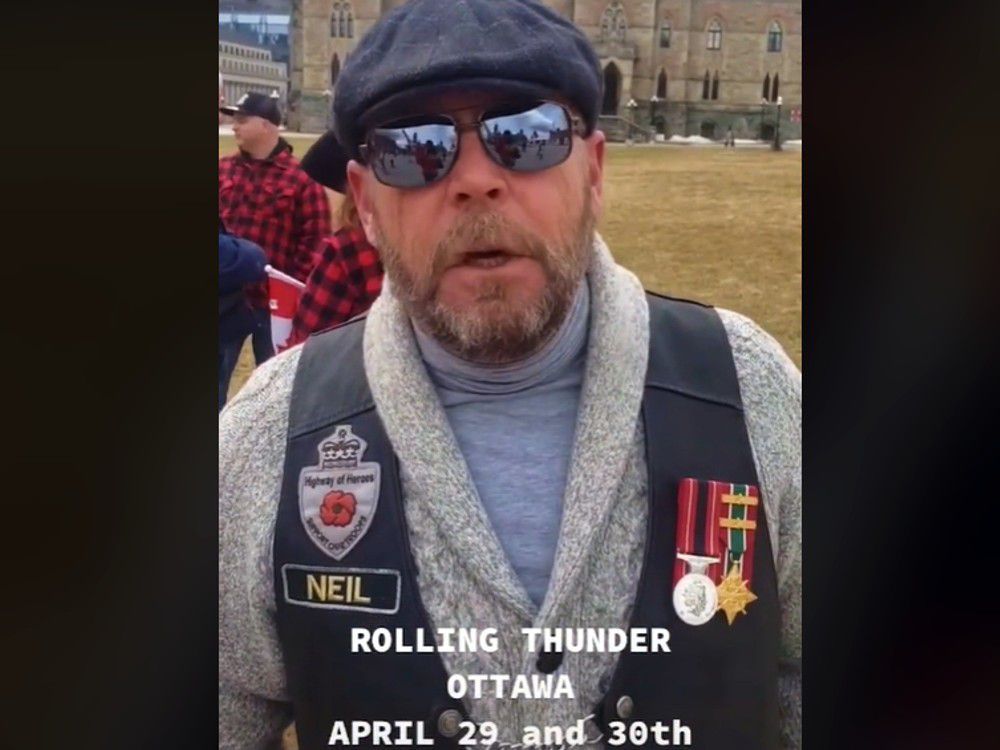 Key ‘Rolling Thunder’ organiser, Neil Sheard, has said that this weekend the riders plan to leave town as soon as the two-day event ends.

He says it is not a “protest” or a convoy. It’s an “event” featuring a Friday rally on Parliament Hill and is supposed to include motorcycles rolling by for a Saturday ceremony at the National War Memorial.

The Ottawa Police Service is taking no chances. He says he will close some downtown streets to vehicles and call for backup from the Ontario Provincial Police and RCMP.

That decision upset Sheard, who said he has been working for weeks with police to approve the vehicle route for Saturday’s event.

Sheard has hinted that a compromise may be on the horizon.

“Rolling Thunder Ottawa is still going… we’ve been working with the city,” he said in a video. posted Monday night on the Live from The Shed YouTube channel, which publicizes Rolling Thunder events across multiple social media platforms.

What is the “Rolling Thunder” event and who is behind it?

As Sheard explains in various interviews posted on social media, he dreamed up the idea of ​​a motorcycle ride as a response to the events at the National War Memorial during the “Freedom Convoy” protest.

The walk is a way to “pay respect back” to the monument, he said in several video interviews.

During the “Freedom Convoy” occupation, officials erected a fence around the War Memorial after a video of a protester dancing on top of the Tomb of the Unknown Soldier drew criticism.

The fence “desecrated” the War Memorial, Sheard said in an interview on the Live from the Shed YouTube channel.

A group of “Freedom Convoy” protesters, including veterans, tore down the fence.

Veterans then stationed themselves at the memorial, sleeping in a tent and taking three-hour shifts, Sheard said in an interview on the Clyde Do Something YouTube channel. “We protected it with our lives.” The police then removed the protesters.

At Saturday’s “Rolling Thunder” event, the motorcycles were supposed to ride past the War Memorial, where veterans would lay a wreath.

“We gave up some ground. We’re bringing it back, plain and simple,” Sheard said in the video. He seemed to mean that metaphorically, as he also said that there were no plans to stay at the War Memorial.

“Go inside, turn the cenotaph and we’re out of town,” he said.

Sheard said the bike ride would help heal a country divided by “division, fear and hate.”

“We have to put an end to it. And getting that monument back is a really good place to start to heal this country,” Sheard said in the Clyde Do Something interview.

Sheard advised participants in this weekend’s events not to bring flags reading “Fu** Trudeau” that were seen during the “Freedom Convoy” protest on Parliament Hill.

Not out of respect for the prime minister, quite the opposite. Justin Trudeau’s name should not be mentioned, he said.

“That Fu**Trudeau flag, I love it,” Sheard said in the interview. Use it some other time, okay? Because right now the veterans won’t legitimize it. You put his name anywhere on this, we don’t want anything to do with that guy, seriously… He’s a stain on this country.”

Sheard said in an interview posted on the Live from the Shed YouTube channel that he once worked as a long-haul truck driver and joined the Canadian Armed Forces at age 38. He did two tours in Afghanistan, was injured, and was later released.

When the pandemic started, he didn’t like lockdowns or wearing a mask, Sheard said in a Live from the Shed interview. “I started doing a lot of research, looking at the World Economic Forum.”

Sheard said he started protests against the mandate in Peterborough. He received fines for violating pandemic regulations, but said he received help fighting them from Rebel News, the far-right media platform that promoted the “Freedom Convoy.”

MPP Randy Hillier and Maxime Bernier, head of the People’s Party of Canada, attended one of his rallies, Sheard said.

When he announced his idea for a motorcycle ride in Ottawa, Sheard said he realized he needed organizational help. Freedom Fighters Canada jumped on board.

The Freedom Fighters Canada website describes it as a “non-profit organization calling for an end to all government mandates; the end of all tyrannical bills and legislation. The government has exceeded its limits, we are here to return them to their place”.

Two members of the organization were featured in a Live from the Shed video posted on the Freedom Fighters Canada website.

Bethan Nodwell, a nurse from Chelsea, Quebec, said she opposed COVID-19 vaccines, volunteered for the “Freedom Convoy” protest and ended up running the Parliament Hill stage for three weeks.

Jerome O’Sullivan said he had worked in the oil and gas industry in Alberta, but became suspicious of vaccinations after the provincial government offered people money to get vaccinated and he read disturbing news about the Pfizer company. “Something seemed wrong,” he said in the video.

O’Sullivan quit his job and headed to Ottawa for the “Freedom Convoy” protest and has since participated in other demonstrations and “built the team” at Freedom Fighters Canada.

The other group listed as a sponsor of the “Rolling Thunder” events in Ottawa, Veterans4Freedom, was founded in recent weeks.

Sign up for daily headline news from the Ottawa Citizen, a division of Postmedia Network Inc.

The next issue of the Ottawa Citizen Headline News will be in your inbox soon.