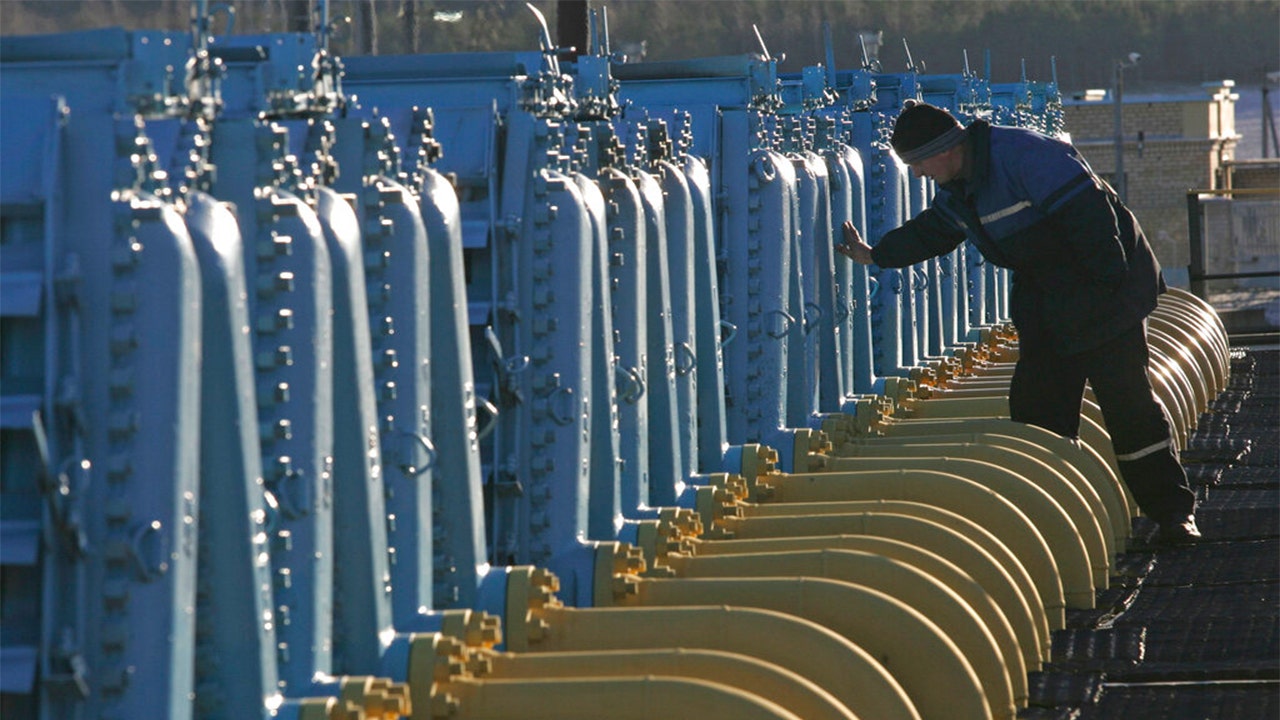 Michigan Republican Rep. Peter Meijer provides insight on how to respond to the Russia-Ukraine war in ‘Kennedy.’

Polish and Bulgarian officials said Tuesday that they were told by the Russian energy company Gazprom that it would cut off natural gas supplies to the two countries for refusing to pay in Russian rubles.

The suspensions, due to take effect on Wednesday, would be the first since Russian President Vladimir Putin said last month that “unfriendly” foreign buyers would have to pay state-owned Gazprom in rubles rather than dollars and euros.

FILE: A Belarusian worker on duty at a gas compressor station on the Yamal-Europe gas pipeline near Nesvizh, some 81 miles southwest of the capital Minsk, Belarus. (AP Photo/Sergei Grits, File/AP Newsroom)

European leaders said they would not comply with the ruble requirement, arguing that it violated the terms of the contracts and its sanctions against Russia for its military aggression against Ukraine. Only Hungary has acceded to Putin’s demands.

Around 60% of imports are paid for in euros and the rest in dollars. Putin’s demand was apparently intended to help boost the Russian currency amid war-imposed Western sanctions.

Poland’s state gas company PGNiG said it was told by Gazprom that its deliveries via the Yamal-Europe gas pipeline would stop on Wednesday morning.

The Yamal pipeline transports natural gas from Russia to Poland and Germany via Belarus. Poland has been receiving some 9 billion cubic meters of Russian gas annually, meeting about 45% of the country’s needs.

BECAUSE OF BIDEN, US ENERGY SITUATION ‘KEEPS GETTING WORSE’: ALASKA GOVERNOR

The Bulgarian Energy Ministry said it was also notified that Russian gas supplies to Bulgaria via the TurkStream pipeline would cease on Wednesday.

A woman cries in front of houses damaged by a Russian airstrike, according to locals, in Gorenka, on the outskirts of the capital kyiv, Ukraine, Wednesday, March 2, 2022. (AP Photo/Vadim Ghirda/AP Newsroom)

Poland has been a staunch supporter of neighboring Ukraine during the Russian invasion. It is a transit point for weapons that the United States and other Western nations have provided to Ukraine.

This week, the Polish government confirmed that it was sending tanks to the Ukrainian army. On Tuesday, he announced a sanctions list targeting 50 Russian oligarchs and companies, including Gazprom.

Bulgaria was once one of Moscow’s closest allies, but relations soured after a new liberal government took office last fall and after Putin’s army invaded Ukraine in February. It has supported sanctions against Russia and has provided humanitarian aid to Ukraine.

Poland’s gas company said it was considering taking legal action over the Russian demand for payment. But Polish climate minister Anna Moskwa stressed that Poland was prepared for such a situation after working for years to reduce its dependence on Russian energy sources.

Several years ago it opened its first liquefied natural gas (LNG) terminal in Swinoujscie on the Baltic Sea coast, while a pipeline bringing gas from Norway, called the “Baltic Pipe”, will come into operation later this year.

FILE: A man looks at a screen showing the rates of the US dollar and the euro against the Russian ruble at a bank in a shopping mall, March 15, 2022, in Moscow, Russia. (Konstantin Zavrazhin/Getty Images/Getty Images)

Bulgaria said the new gas payment system created considerable risks for the country and that it was working with state gas companies to find alternative sources to replace the supplies it receives from Russia.

But the Bulgarian government said no restrictions will be imposed on domestic gas consumption for now even though the Balkan country of 6.5 million meets more than 90% of its gas needs with Russian imports.

Cutting off Gazprom supplies to other countries would spell economic pain for Europe, which relies heavily on Russian natural gas to heat homes, generate electricity and power industry. Still, any potential cut is a two-way street, and Russia is also likely to take a hit given its reliance on European customers.