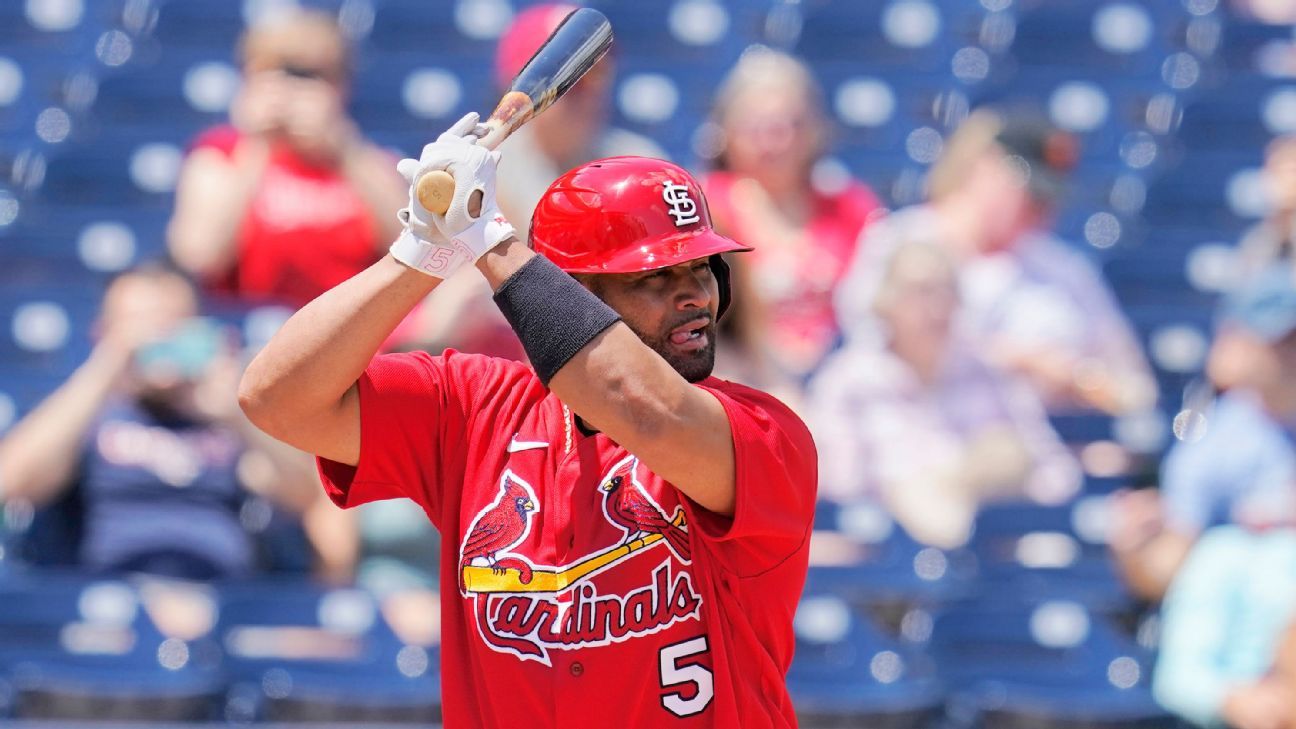 Albert Pujols will be in the starting lineup for the St. Louis Cardinals against the Pittsburgh Pirates when he begins his final big league season Thursday in what should be an emotional return to Busch Stadium.

Cardinals manager Oliver Marmol announced Monday that Pujols, who signed a $2.5 million contract to return to the club where he became a star, will be the designated hitter for his 22nd consecutive Opening Day start. That matches Hank Aaron and Carl Yastrzemski for second most behind only Pete Rose, who made 23 straight during his career.

“I don’t want to set expectations because I like to be surprised, so I’m just going to enjoy it,” Pujols said as he headed into the last few days of spring training in Jupiter, Florida. “I’m sure it will be emotional for me, and the fans, too. But my focus is on trying to get in the reps I need to get myself ready for this season.”

Pujols could spot Paul Goldschmidt at first base at times this season, and he was expected to get a little work there this week before the club heads back to St. Louis. Otherwise, the Cardinals view him as a designated hitter and late-inning pinch hitter, along with a sage presence in a clubhouse that has a nice mix of the old and new.

The 42-year-old and his close friend Yadier Molina already have said this will be their final big league season. That also could be the case for right-hander Adam Wainwright, who joined the other two in bringing World Series championships to St. Louis in 2006 and 2011.

Pujols, who returns to St. Louis with 679 career home runs, hit .236 with 17 homers last season while splitting time with the Angels and Dodgers. But the three-time NL MVP showed he can still be a force against left-handed pitching, hitting .294 with 13 homers in just 136 at-bats, which made him an attractive depth option for the Cardinals.

“This guy is definitely dialed in,” Marmol said. “He’s on a mission to finish well. He’s in shape, he’s feeling well and with his timing, every time he gets an at-bat, he feels better. From a mental and physical standpoint, he’s ready to go.”

Forty-year-old Wainwright was picked Saturday to start Opening Day, although the announcement merely made official what just about everyone expected. It will be the sixth time he has taken the ball on Opening Day for St. Louis.

“Me and those two guys are the last ones still here, and it’s special to have them with me as I’m finishing my career,” Pujols said. “Hopefully we’ll get one more run at a title. That would make it so perfect.”

In other news Monday, the Cardinals placed right-hander Jack Flaherty on the injured list and announced that rookie pitcher Andre Pallante had earned the last spot on the 28-man roster after a strong spring training.

The Cardinals had already indicated they do not expect Flaherty back for the first month of the season. Their Opening Day starter the past two years received a platelet-rich plasma injection on March 18 to alleviate irritation in his el shoulder, and he has been dealing with a small tear in his right labrum that could be compounding the difficulty of the recovery.