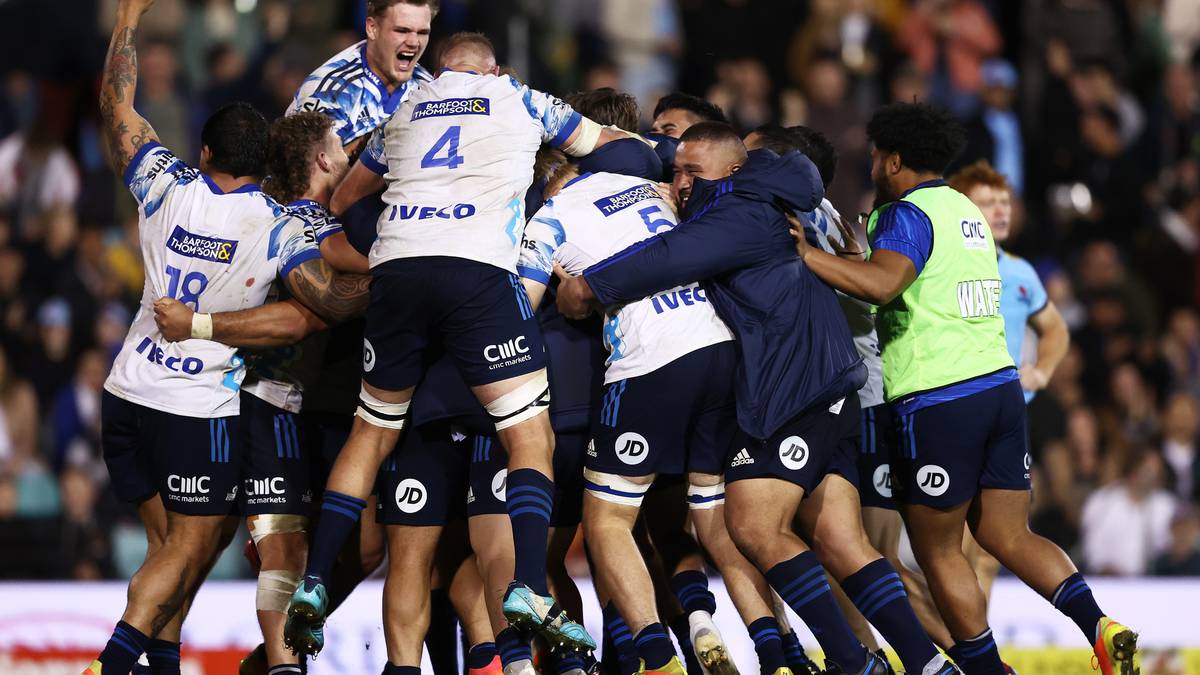 The Blues celebrate the victory over the Waratahs. Photo/Getty

A heroic effort from Leon MacDonald’s next-generation team has propelled the Blues to a franchise-record winning streak.

Last week in Canberra, the Blues needed Beauden Barrett to nail a stoppage-time goal to seize victory from them.

On Saturday night, in front of a packed Leichhardt Oval in Sydney, this time Zarn Sullivan stepped forward to nail a decisive, match-winning goal to cap a courageous comeback from the Blues, who are well under his strength. .

MacDonald’s men don’t know how to lose right now. The Blues have now overtaken the 1997 championship-winning team to extend their winning streak to 13 games.

Against the Waratahs, a Blues team that fielded 14 starters survived two yellow cards in the first half and overturned a 14-3 second-half deficit through tries by Cameron Suafoa and Luke Romano.

Captaining the Blues for the first time, Romano charged with blood pouring from his eye, only for Waratahs playmaker Tane Edmed to knock down a penalty to level the match with a minute remaining.

Like they did last week, only this time with a slew of new faces, the Blues kept their composure to calmly work their way up the field and put Sullivan in position to freeze the southpaw winner while a swarm of Waratahs defenders pounced on him.

Having secured top spot with a game to spare, MacDonald opted to flag the changes and rest his starters for next week’s quarter-finals, but the Blues were always confident their young squad would hold their own.

MacDonald can now sit back with a knowing smile. Not only has he staked the luxury on his front-row starters enjoying a bye week, but exposing the future to such adversity and seeing them emerge from the other side will also boost his confidence significantly.

After a tricky first half, the Waratahs changed teams and tactics in the second spell after finding no success with their lineout maul to get some air on the ball. Two set pieces later and right winger Mark Nawaqanitawase hit a brace in six minutes to open the game.

Just when it looked like the Waratahs would clear out, the Blues found a way to catch them.

The result, at least for the Blues, has no bearing on next week’s home quarter-final. Darren Coleman’s Waratahs will now be forced to travel to Hamilton for the quarterfinals.

The Blues’ attack was largely disjointed during the first half, which was no surprise given the plethora of unknown combinations that came together.

Corey Evans offered a strong presence in midfield, but 20-year-old rookie Jock McKenzie, first five eighths, suffered a shaky start when he fumbled the ball on contact, missed his first penalty attempt and was brought down on a carry.

With the ball in hand direction was lacking as the Blues made several uncharacteristic mistakes. Sullivan, who moved into the top five for the final 25 minutes, landed three kicks, including a restart, completely, but got it right when it mattered most.

The Blues weren’t helped by losing 20-year-old prospect Anton Segner to what appeared to be a serious ankle injury in the 12th minute, which he injected into Akira Ioane off the bench.

For the vast majority of the first half, the Waratahs camped inside the Blues half. The locals took two yellow cards to the blues, both in the loose forwards.

First, Adrian Choat was caught in an unfortunate position with Waratah running back Jake Gordon going down on his attempted tackle and being caught high. Ioane then picked up a second yellow a minute later for a team repeat offense as the Blues relented but refused to break, under relentless pressure on the goal line.

While their lineout disintegrated, the Blues’ scrum proved to be a weapon in winning two more penalties that allowed them to emerge 3-0 at half-time, despite being reduced to 13 men and forced to live off 33 per cent of the territory.

That McKenzie’s second penalty attempt broke the tie for the first points in the 37th minute speaks to the few highlights of the attack.

As fatigue set in and both teams became more willing to use the ball, the game opened up.

The Blues once again savored the impact from the bench, with Suafoa and Karl Tu’inukuafe adding strikes to help maintain their unbeaten streak.

With home court advantage and momentum firmly in their favor, the Blues remain the team to beat.