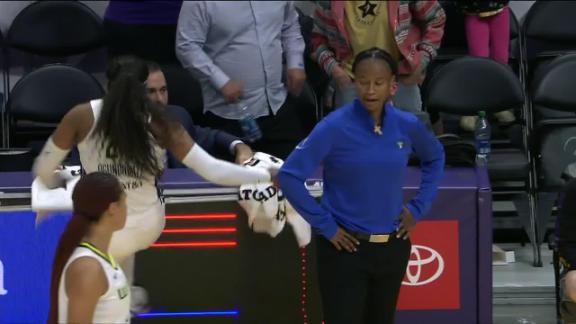 Sykes made two free throws with 18.2 seconds remaining for a five-point lead, but Isabelle Harrison hit a 3-pointer to pull Dallas within 93-91 with 5.5 remaining. Sykes was called for an offensive foul on the inbounds play, and after a timeout, Arike Ogunbowale drove to the basket and was fouled with 0.8 remaining. She missed the first few free throws and was called for a violation on the second.

Ogunbowale left and kicked the scorer’s table in frustration and Los Angeles missed the technical free throw to finish.

Los Angeles scored the first five points and led until the remaining 6:11 of the fourth quarter when Marina Mabrey made a layup down the lane to give Dallas a 79-78 lead. Los Angeles took an 88-83 lead with three minutes left and didn’t score again until Cambage converted a three-point play with 36 seconds left.

Harrison had 20 points and eight rebounds for Dallas (5-4). Mabrey and Arike Ogunbowale each scored 16.