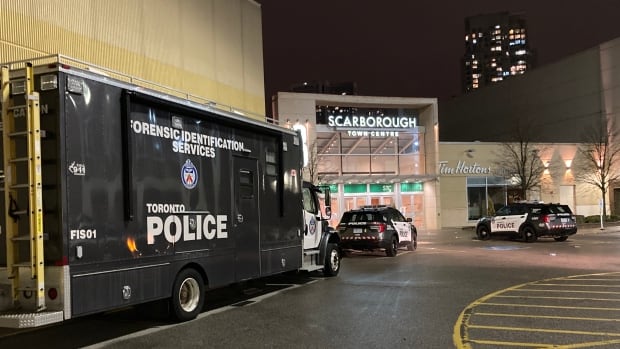 A 14-year-old boy has been arrested after three men were seriously injured in a stabbing attack inside the Scarborough Town Center shopping mall Tuesday night, Toronto police say.

A fight broke out between two groups of people inside the mall near McCowan and Ellesmere streets in Scarborough. Police received a call about the fight around 6:30 p.m.

When officers arrived, they found three men who had suffered stab and knife injuries, according to Const. Alex Li, spokesman for the Toronto Police Service.

Toronto paramedics took them to the hospital, where they are listed in serious condition. Police have not released the ages of the victims.

“Our investigators believe at this point that this is an isolated incident,” Li told reporters outside the mall.

He said police were able to make a quick arrest with the help of mall security and the teen is in custody. A knife has been recovered from the scene.

“I can confirm that there are multiple scenes,” he said.

Li said a large area inside near Gate 3 has been cordoned off as officers collect evidence from the scene. The crime scenes are outside storefronts, in a hallway, in a driveway and outside in a parking area, she said.

“Our investigators believe there are multiple people responsible for this,” he said.

Many people were inside the mall at the time of the stabbing, he added.

“This is an ongoing and active investigation. This was a shopping mall on a weekday and a weeknight,” Li said. “There were people outside and shopping. We believe there are witnesses to this incident.”

Police are urging anyone who witnessed the fight or may have cellphone video of the altercation to come forward. Officers from the Toronto Police 43rd Division are investigating and will review security camera footage from the mall.

Police vehicles, including a forensic identification services truck, were parked in front of one of the mall’s entrances Tuesday night after the stabbing.

Blood was visible on the floor of the parking lot.

Li said that the police have deployed additional officers in the surrounding area and that it is safe.