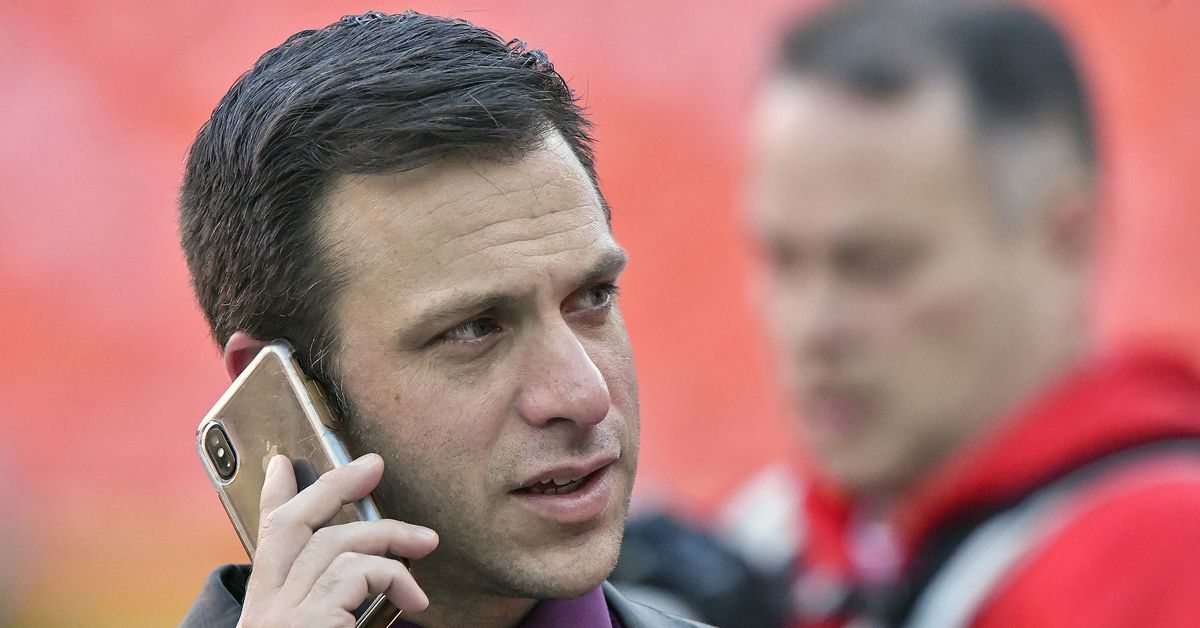 Kansas City Chiefs general manager Brett Veach doesn’t like going into a draft with needs. He would prefer to have his existing needs already checked off with veterans, allowing him to go into the draft with the ability to select the best player available.

But without a whole lot of work between now and the upcoming NFL Draft, that’s not going to be possible.

The Chiefs still have a half dozen spots where they could use another starter. At least three of those positions could be considered urgent needs: a position where without an upgrade, it could be what keeps Kansas City from making the Super Bowl — or an even worse result.

What are those positions? Let’s take a look at the five most glaring holes remaining on the roster, along with what Veach could do to fill them — whether in the draft or otherwise.

I know this sounds crazy. But have the Chiefs done enough to replace Daniel Sorensen?

Yo lo se. Yo lo se! On the surface, it sounds laughable. But Sorsensen played more than 60% of the Chiefs’ defensive snaps last season. Who is taking on that workload?

The hope is Juan Thornhill takes a step forward — but last season, he already played 76% of the snaps. Justin Reid was a great signing, but he’s expected to take Tyrann Mathieu’s snaps. Deon Bush is more of an Armani Watts replacement on special teams than a key defensive piece. Are second-year players Zayne Anderson or Devon Key going to play 60% of the team’s snaps? It seems unlikely.

Here’s the good news: this is a very good safety class with plenty of options for Kansas City. Georgia’s Lewis Cine and Michigan’s Daxton Hill could be in play at the end of the first round. Jaquan Brisker (Penn State), Jalen Pitre (Baylor), Nick Cross (Maryland) and Kerby Joseph (Illinois) are all solid options on Day 2. If the Chiefs pick one of those players, they should be set at the position.

But if the board gets wiped clean — or if the team isn’t as high on this crop of safety as the media — then Steve Spagnuolo will have to get creative, shifting his defense from the usual three-safety looks to more a more traditional nickel alignment with three corners and two safeties.

I like Andrew Wylie. During the second half of last season, he did an admirable job of filling in when Lucas Niang, Mike Remmers and Kyle Long were out with injuries. But how much confidence do you have in Wylie as the no-doubt staring right tackle when the Chiefs are scheduled to face Bradley Chubb, Randy Gregory, Chandler Jones, Maxx Crosby, Joey Bosa and Khalil Mack multiple times this season?

If the Chiefs are going to transition from an RPO-based offense to something more closely resembling Andy Reid’s roots in the West Coast scheme, keeping quarterback Patrick Mahomes upright is going to become even more important. The ideal scenario is that when Week 1 arrives, Niang will be healthy and ready to go. It’s just hard to count on that from a player coming off a torn patellar tendon in Week 17.

Taking an offensive tackle in the first round seems unlikely — but even in the middle rounds, this draft is loaded with options. Players like Kentucky’s Darian Kinnard, Minnesota’s Daniel Faalele, Abraham Lucas from Washington State and Max Mitchell of Louisiana are all worth a look in the middle rounds. They might not be ready to start right away, but they all have enough upside — and at a minimum, would add depth behind Wylie if (or when) injuries arise along the offensive line.

Could you do it? Were you only able to get to three? If so, you’re certainly not alone. The Chiefs currently have six cornerbacks on the roster. The top three are L’Jarius Sneed, Rashad Fenton and Deandre Baker. Behind them are Dicaprio Bootle, Luq Barcoo and Brandin Dandridge. So to say cornerback is an issue would be a massive understatement. Thankfully, the team recognizes this — and is reportedly planning to be aggressive by adding multiple starting-level players in the draft.

In addition, Kansas City has reportedly been involved in trade talks with the New York Giants to acquire former Pro Bowl cornerback James Bradberry — and have been linked to former Pro Bowl corner Stephon Gilmore. Adding either Bradberry or Gilmore to the starting lineup besides Sneed and Fenton would be a good start — but even then, cornerback depth will still be an issue.

Chiefs are in the market for a corner, they have displayed interest in veteran free agent Stephon Gilmore, who has also been of interest to Raiders, and potential trade for Giants’ James Bradberry, according to a league source. Chiefs, several NFL teams interested in Bradberry

If the Chiefs could add a starting-level corner prior to the draft, they could get away with waiting until later rounds to select one. A player like USTA’s Tariq Woolen would make some sense on Day 2. With his length from him, Mizzou’s Akayleb Evans could be a good fit in the middle rounds. Another player to watch is Joshua Williams from Fayetteville State. I promise that’s a real name and a real school — and leading into the draft, he’s gaining some very real buzz.

Speaking of trade buzz, it feels like every day, a new wide receiver is added to the rumor cycle. When the Chiefs traded Tyreek Hill, it was painfully obvious that Veach and head coach Andy Reid would need to throw major assets at the position in order to mitigate the loss of one of the most dynamic weapons in NFL history. Juju Smith-Schuster, Marquez Valdes-Scantling and Mecole Hardman is a solid start. But it’s going to take more than those three to make this offense hum at the same rate as it did with Hill.

Thus… the trade buzz. A good place to start looking is with the 2019 NFL Draft class, whose non-first round receivers are going into a contract year — and thanks to the deals for Hill and Davante Adams, the receiver market has just exploded. Some teams could balk at the new asking prices. That’s why the Tennessee Titans’ AJ Brown and DK Metcalf of the Seattle Seahawks are in the news. Diontae Johnson of the Pittsburgh Steelers and Terry McLaurin of the Washington Commanders are two other receivers in which the Chiefs could be interested — although at this time, there’s no real reason to believe either is available.

Jets insider: Exploring the Metcalf/Brown situations. Worth a try? And it is.

You may be asking why the Chiefs would trade Hill because he wanted a massive payday — only to turn around and trade for another wide receiver (who likely isn’t as good as Hill) and pay him big money It’s a fair question. The answer lies in the age curve. Hill is 28 years old. He’ll be 31 at the end of this contract. Metcalf and Brown are 24, Johnson is 25 and McLaurin is 26. That gap could be enough to give the Chiefs pause about Hill, pushing them towards younger (and slightly cheaper) options.

If those top-tier trade options don’t work out, the Chiefs could pivot to one of Brandin Cooks (1 year, $12.5 million), Corey Davis (2 years, $23 million) or Laviska Shenault (2 years, $3 million) to see if one of the three is available. It might also be worth checking in on Chase Claypool. After his playing time he went on a steep decline last year, his relationship with the Steelers may have soured.

Even if every trade option falls through, there are still a ton of intriguing receiver options in this year’s draft. Without Hill on the roster, Arkansas’ Treylon Burks suddenly makes more sense. The Crimson Tide’s Jameson Williams might require a trade-up, but he would do wonders in replacing the speed the Chiefs will lose without Hill. What Chris Olave (Ohio State), Skyy Moore (Western Michigan) and Jahan Dotson (Penn State) lack in size, they more than make up with their ability to create separation. Georgia’s George Pickens and Clemson’s Justyn Ross are coming off serious injuries — but if they’re able to regain form, it shouldn’t shock anyone if either end up being the best receiver from this class. The list goes on and on and on. Teams are going to add legitimate starting wide receivers as deep as the late third round.

Kansas City’s only starting-level defensive end is a player who was — just three months ago — considered by most fans as someone who would be cut during the offseason. That’s… problematic.

The roster currently includes Frank Clark, Mike Danna, Joshua Kaindoh and some players who were signed on reserve/future contracts. That’s obviously not going to do the job. There are some options still remaining in free agency: Jadeveon Clowney, Melvin Ingram, Jerry Hughes, Jason Pierre-Paul and Rasheem Green could each serve as an upgrade from the team’s current options. It’s possible a trade option or two could emerge between now and the draft, but there really haven’t been any reports of players coming available.

This is where things get tricky. The Chiefs can find starters at tackle, safety, cornerback and wide receiver where they are currently slotted to pick. But after the top half of the first round, it’s incredibly difficult to find such a player at defensive end. Those players could eventually develop into impact edge rushers, but only rarely does it happen in Year 1. Finding a difference-making EDGE could very well require a trade-up into the top 15 or 20 picks.

Jermaine Johnson is the only guy that Ekwonu struggled to handle this year. Though then again, *everyone* struggled with Johnson so it’s not really a red flag to me.

Both should go top 10 imo. pic.twitter.com/6wSg2DGxVy

There are four defensive end prospects worthy of a trade-up — most of whom won’t make it out of the top 10: Michigan’s Aiden Hutchinson, Orgeon’s Kayvon Thibodeaux, Travon Walker out of Georgia and Jermaine Johnson of Florida State. Once you get past that tier, it’s hard to imagine getting more than an average starter in Year 1.

One path the Chiefs might take is staying put at 29 and 30, selecting Michigan’s David Ojabo and redshirting him in his rookie year while he recovers from his torn Achilles. If Ojabo was healthy, he’s likely a top-15 pick. With the injury, however, he’s likely to face a pretty dramatic slide. Pairing the Ojabo pick with a solid Spagnuolo-style edge rusher on Day 2 could serve the needs for the here-and-now — while also buying low on a blue-chip talent. Players like Kentucky’s Josh Paschal and Texas A&M’s Michael Clemons could fit that Day 2 criteria.

Such a plan would require the Chiefs to circle back with one of the veteran pass rushers still remaining in free agency, allowing them to attack the position with numbers and depth rather than high-end talent. While that might not be what anyone was expecting during this offseason, it could work.

The Chiefs don’t like heading into the draft with needs — but this time around, they will almost certainly do exactly that. The team has six picks in the top 105, eight in the top 150 and 12 overall. So if it becomes necessary, that should be plenty of ammunition to move up and down the draft board to fill the remaining holes on the roster.

The stakes are high. Now that Hill, Mathieu and Anthony Hitchens are gone, the next month will help determine what the start of this next ‘era’ of Chiefs football will look like.