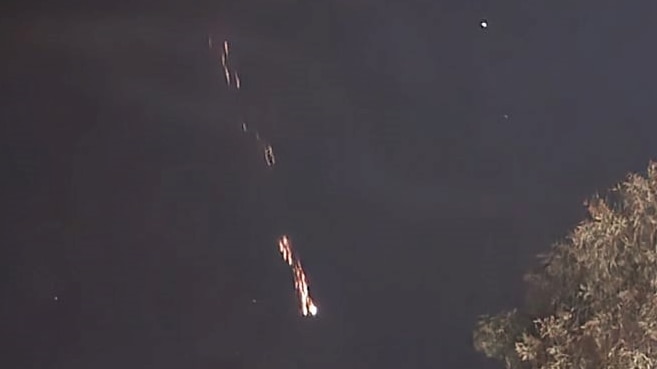 A “meteor shower” that lit up the skies over northern Western Australia earlier this week was actually the remains of a Chinese rocket that fell out of orbit.

Beams of light lit up the skies over Broome in the early hours of Monday morning, with sonic booms echoing across the city.

Several locals captured the moment in videos that were posted on social media, showing debris breaking apart and streaking across the night sky around 12:30 a.m. Monday.

Glen Brough said he was up late after a police chase near his home when he saw the light show but thought the debris was missiles or flares.

“I was sitting in the driveway with my partner… and she said, ‘What is that?’ And the sky lit up, completely lit up,” she said.

“We honestly thought they were missiles.”

Harvard astrophysicist Jonathan McDowell told ABC that the light show was created by a piece of a Chinese Long March 3 rocket that disintegrated in the atmosphere.

The rocket stage was launched in July last year and left in a geostationary orbit until, according to Dr. McDowell, it eventually fell back to Earth as its orbit dipped into the atmosphere.

“It’s [the rocket] launched a communications satellite called Tian Lian, which is actually a relay satellite used by Chinese astronauts on the Chinese space station,” he said.

“The path showed that it goes east over the entry point just over Broome and crosses northern Australia, so both the direction and timing are correct,” Dr McDowell said.

Kimberley astronomer Greg Quicke said the slow speed of the streaks captured in the images indicated they were space debris.

“It looks to me like space junk going into the atmosphere and I say that because of its speed,” Quicke said.

“If they are meteorites, they are much faster than that.”

Dr McDowell said it was possible that some fragments of the rocket that burned up over Broome could even have returned to Earth in Western Australia.

“Just a few weeks ago we had another Chinese rocket stage come down on Gujarat in India and parts of that stage survived,” he said.

“It’s not impossible that you could find the same thing in Western Australia – only a few small pieces of the rocket can survive re-entry and end up on the ground.”

This re-entry sighting comes just a few months after another piece of a Chinese rocket, used on a different mission, crashed into the far side of the moon.

According to Dr. McDowell, the Long March 3 rocket is the previous generation “workhorse” widely used in China, which will be replaced by the larger Long March 5B rocket in the future.

Long March 5B is a potential concern, Dr. McDowell said, because it leaves a larger rocket stage in orbit that has resulted in large objects falling on cities in Africa in the past.

“This 20-tonne rocket stage once came back over West Africa and there were 20-meter-long metal bars crashing into West African villages,” Dr McDowell said.

“The South Pacific, for example, is usually one of the preferred graveyard areas for spacecraft, but occasionally things like Skylab have fallen over Western Australia,” he said.

Locals heard rumblings that posted footage of the rocket part’s re-entry, and Brough confirmed that it echoed through the city a minute after the light show ended.

“I think all the dogs in Broome started barking. It was just a rash of dogs after that and, yeah, it was actually pretty scary,” he said.

According to Dr. Devillepoix, they could have been hypersonic booms caused by the objects re-entering the Earth’s atmosphere breaking the sound barrier.

“It’s basically the same sonic booms that you hear, if you have a fighter jet that goes hypersonic through the atmosphere, it puts out a pretty big shock wave,” he said.

“But it’s usually pretty high up in the atmosphere, so it’s generally unlikely that these shock waves will reach the ground… but it’s definitely possible.”

Despite the shock waves and how overwhelming it was to see the moment in real time, Brough said he’ll remember it for a while.

“I’m not usually up at twenty past one in the morning. So yeah, it was something different.”

Local news straight to your inbox

ABC Kimberley will deliver a roundup of the week’s news, stories and photos every Tuesday. Sign up to stay connected.