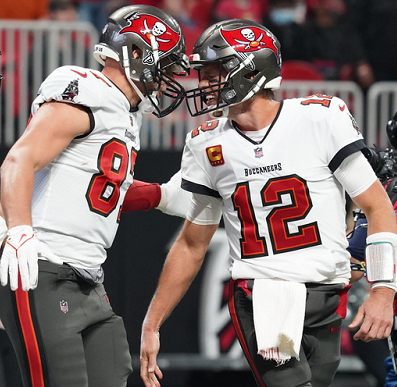 Yesterday, BSPN+ released the long-awaited chapter, Episode 10, of “The Man in the Arena” segment. It is a series produced by Bucs quarterback Tom Brady, chronicling his career.

Most of the segments dealt with seasons in which Brady’s teams won a Super Bowl. This episode was the first Joe watched because it was about Brady’s first season with the Bucs that ended with the franchise’s second Super Bowl victory.

* The episode was told through the eyes of only three people: Brady, his father (Tom Brady, Sr.) and tight end Rob Gronkowski. Just father and son Brady and Gronk. Interestingly, there was no mention or even a clip of the famous Super Bowl parade of boats.

* The episode began with Brady looking for a new team after leaving the Belicheats. “In my mind I’m thinking, ‘If they’re another team and they’re not interested in having me as their quarterback, what the hell is wrong with them?'” He added that he wanted to “grow and learn in ways that he never could have learned if he had never left New England.”

* Gronk said he hadn’t been with Brady for more than eight months when the two met in a Brooklyn park to throw the ball and run routes. Gronk said he was feeling great and Brady asked if he wanted to come out of retirement. Brady had yet to pick a new team at this point. Gronk said he would follow Brady to whatever team he went to. Gronk had no idea it would be the Bucs.

* Brady said he had a list of all the things he was looking for in a team. The ability of the talented position players, the talent level of the team, the commitment to win, the coach, the location and the easy access to visit his oldest son who lives in the New York area. Each category was weighted. The Bucs won, of course, in large part because of front-office vision, Arians and Brady thought the roster was pretty loaded.

* Later, Gronk said he got a call from Brady who told him he had decided to sign with Tampa Bay. Gronk reacted, according to Brady, “Whoa! Tampa?

* Gronk later said that playing in Florida was a goal for him, but that he didn’t know anything about the Bucs or the Tampa Bay region (strange, considering Gronk previously owned property here and his mother lived in Southwest Florida). Gronk joked that he’s like the rest of the general NFL fan base who (at the time) had to be reminded that there was an NFL team in Tampa because the Bucs were so irrelevant for so long. “Right. The Buccaneers.

* Gronk said that when he started studying the Bucs, he began to get excited, and with his mother living two hours away (in the Fort Myers area), Gronk suggested that Brady had picked the perfect team.

* In the past, former Bucs Super Bowl-winning coach Bucco Bruce Arians has said his biggest concern when Brady came to town was that many of his new teammates would be blindsided and misunderstand and work. Gronk said this was actually a thing, and took it upon himself to tell his new teammates (often) that Brady was like them, a human who bled red and had to work his trade just like they did. So they needed to break their tail and focus and not treat Brady like some untouchable deity. Stop looking! Gronk said that once the players met Brady after a handful of practices, the star-studded trance began to wear off pretty quickly.

“This wasn’t the time for googly eyes,” Gronk said of the short window to get the job done due to no OTAs and no mini-spring camps.

* After a few practices, both Brady and Gronk realized what a powerful team the Bucs could become. “I’ve never seen so much talent on the offensive side of the ball before,” Gronk said. “From wide receiver 1 to wide receiver 4, from tight end 1 to tight end 3, we were solid everywhere,” Gronk said. “It was Tampa at the time and they hadn’t been in the playoffs in a long time.” . Expectations were high but they weren’t, you know what I mean?

Translation: The Bucs were so conditioned to lose that despite having Brady, Gronk and Playoff Lenny on the roster, many teammates expected something to go wrong at some point.

* Tom Brady’s father said he only made it to one Bucs home game in 2020 and “it was the wrong game.” The Sunday night debacle against the Saints. “I thought, ‘Why the hell do we travel this far just to get our brains smashed?'”

Part of the reason Brady’s dad didn’t go to another regular-season game was a very bad case of The Sickness. He was hospitalized and almost had to be put on a ventilator. Once a COVID patient is put on a ventilator, there is a 50/50 chance that he will ever see the outside of a hospital again.

“We felt like we were the worst team in the league,” Gronk said of Sunday night’s loss to the Saints.

Despite it being the lowest point of the 2020 season for the Bucs, Gronk said he learned with the Belicheats to “keep it up” no matter what until a solution is found. Eventually the Bucs found one.

* Beating the Saints in the playoffs: “Offensively, we performed a little better than average,” Brady said. “What changed the game was our defense.”

Brady then paraphrased a famous Ric Flair quote: “You have to go through the best if you want to be the best.” It was clear that Brady had a deep respect for Drew Brees.

“Tom and I talked [after the win] and we said, ‘Man! Shit man, we’re going back to the Super Bowl!” Gronk said.

Added Brady: “It was a ‘Holy Sh!t’ moment. … What I learned was that you can have different approaches [than the Belicheats] and still accomplish amazing things.”

* Winning the Super Bowl: Brady seemed to think the Chiefs came in too smug. “They beat us earlier in the year and I think they thought it was going to be the same way.”

Gronk on getting into a groove at the Super Bowl “It felt like the old days. We were doing plays. In the Super Bowl. The spotlight is on us.”

Brady believes the Super Bowl victory was the best game the Bucs played that season. “We hadn’t had many games where we clicked on all cylinders. But against a great opponent, that was the time to do it.”

Brady also gave the defense significant props for their game against the Saints, Packers and Chiefs saying the Bucs’ defense “sealed the deal.”

Summing up the Super Bowl victory and the season, Brady said, “I wanted to show [to the Bucs] They made the right decision.”

Good choice? It was the smartest move the Bucs made since trading Chucky!

Was this a good episode and worth 55 minutes of your time? If you’re a fan of Brady or Gronk or Bucs, yes.

Is it as good as NFL Network’s “America’s Game” series chronicling every Super Bowl winner? No. And the 2020 edition of that Bucs series is a minor episode because Arians and Brady weren’t in it.