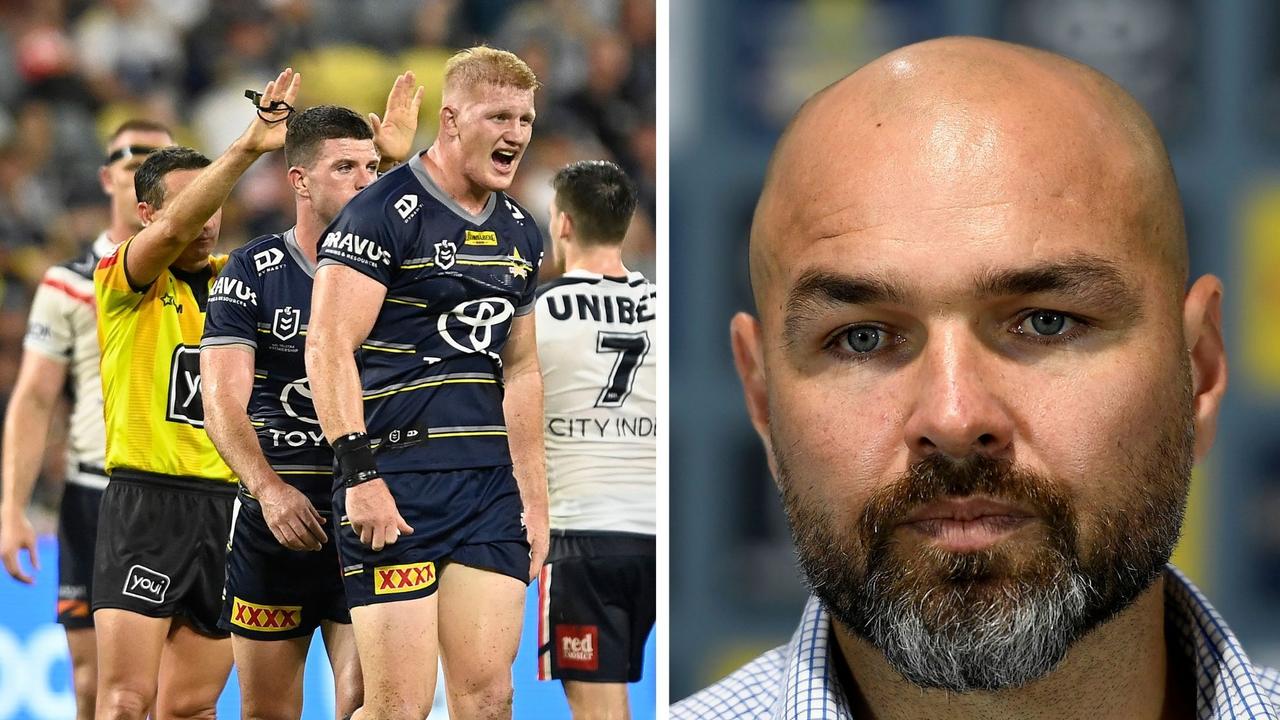 Cowboys coach Todd Payten has opened a “can of worms” after a wild press conference where he accused the NRL of bias towards the top teams and players in the competition.

It came after the Cowboys’ 28-4 loss to the Sydney Roosters on Saturday night where three North Queensland players were unbinned, leaving the side down a man for 30 minutes of the game.

Stream every game of every round of the 2022 NRL Telstra Premiership Season Live & Ad-Break Free In Play on Kayo. New to Kayo? Try 14-Days Free Now >

Payten didn’t have a problem with the first sin binning on Tom Gilbert, who took out Roosters half Luke Keary while he was chasing a kick after a linebreak.

But he had issues with the next two without bins.

In the second half, the most contentious of the sin bins came when Griffin Neame was sin binned for a late tackle on Sam Walker, despite a split second between Walker’s pass and Neame hitting the half as she ran deep into the defensive line.

He also called a high tackle sin bin on halfback Chad Townsend “soft” when he flew in from the side of Roosters enforcer Lindsay Collins and glanced off.

But after the crushing loss, the Cowboys coach followed in the footsteps of Titans mentor Justin Holbrook who said: “It is about us as a club being not one of the big clubs and not getting anything” when discussing a lopsided penalty count in the Gold Coast’s round one loss to the Parramatta Eels.

On NRL 360 on Monday night, reporters Paul Kent and Phil Rothfield revealed that behind closed doors it’s a common belief that the strongest teams in the competition are favoured.

“I’ve been saying it for years,” Kent said.

“I think it’s an unconscious bias, I don’t think they’re deliberately doing it, but the referees have an expectation that the better teams do things better and when those 50-50 calls — I’m not talking about deliberate penalties or anything like that — I think they just fall the way of the better teams more often.

“It’s an unconscious bias, it’s there, the lower teams are all aware of it and I’ve spoken to coaches in the past about it and they’ve said it’s our job to try and turn it around. But they do feel like they’re fighting an uphill battle to try and become one of the better teams, therefore they can get the benefit of the doubt in those situations.”

Rothfield said the he felt the press conference situation may land Payten in hot water.

“It’s a story because Todd Payten said it publicly,” he said. “You speak to any coach who’s struggled for a couple of years in the bottom half a dozen sides, they all tell you the same thing but it’s off the record.”

Kent replied to Rothfield: “I’ve spoken to coaches for years and if you tend to look for it when you’ve been made aware of it, you start to spot it.

Fox League reporter James Hooper said he found the timing interesting, as of the three without bins, only one was wrong in the Griffin Neame hit on Sam Walker.

“Aside from that, they were outplayed by one of the better teams in the competition,” Hooper said. “It’s interesting he’s decided to raise it after a strong start to the season from the Cowboys and then he decides he wants to go down this road.

“Coaches that do play this card, generally they are trying to exert some pressure on the match officials trying to get a bit more rub off the green.”

He also asked Kent about Payten’s specific grievances from the Roosters match.

Kent was unsure about the specific moments, but said over the years issues like a contentious dropped ball would go the way of the stronger side, although the captain’s challenge had rectified some of the issues.

Braith Anasta said it was “a bit of a can of worms” if Payten was suggesting the best players and better teams in the competition wouldn’t get without binned for the same incidents as the Cowboys players over the weekend.

But Kent said Payten didn’t specifically criticize the referee and added: “The question is what’s the NRL going to do about it?”

The Payten comments sparked a debate over the weekend.

After breaking down his side’s three no bins, Payten continued: “There were some calls tonight that went 50-50 against us and the Titans coach a couple of weeks ago made a comment and I agree with him.

“Teams that have been up the pointy end of the competition for a while now or have high-profile players get the benefit of the doubt too often. That’s frustrating and that’s my opinion over watching footy for a long time.”

Captain Jason Taumalolo said he agreed with Payten but that it wasn’t his place to comment on the officiating.

Discussed on Fox League after Saturday night’s games, Michael Ennis said it was tougher to judge as the analysts weren’t sitting in the coaching hot seat.

“It’s a big call, I don’t think I necessarily agree,” Ennis said. “I didn’t have an issue, I thought the better side won tonight.”

He did however agree that Neame’s sin bin was wrong and that referees need to “stop sin binning guys”.

Former Melbourne and Roosters halfback Cooper Cronk added: “I think he needs to be very careful with the words he chooses because he’s inferring something.

“I can’t agree with him that the high profile players and teams get the rub of the green.”