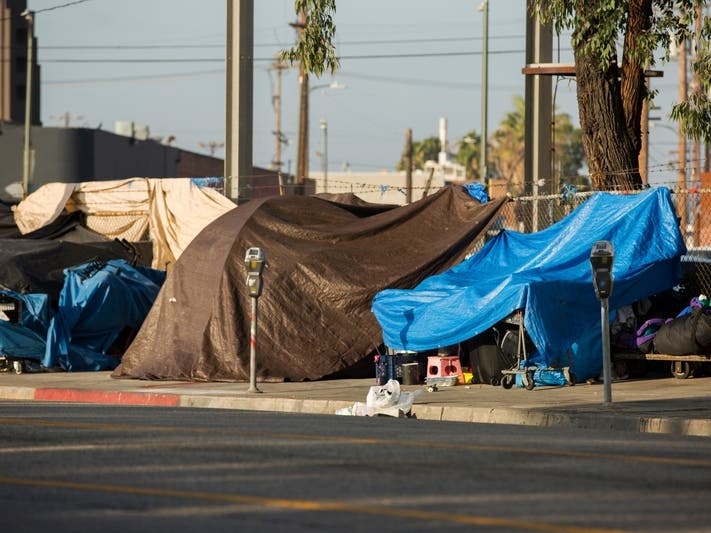 HOLLYWOOD, CA — Once again, Los Angeles County Sheriff Alex Villanueva is offering to send his deputies outside their jurisdiction and into a City of Los Angeles neighborhood to clear out homeless encampments — this time in Hollywood. He also said his department has plans to “invade the beach again” in time for the summer tourist season.

It’s an extraordinary move meant as an indication of the city’s policies during the homelessness crisis. Supporters see it as boldly proactive in restoring safety to neighborhoods overrun with homeless encampments. Critics see it as politically performative and ineffectual to the point of being harmful. The Los Angeles Police Department did not have a response to Villanueva’s plans as of Monday morning

“The Los Angeles County Sheriff has plans to make Hollywood feel safer despite it not being LASD’s patrol area,” the department tweeted Sunday.

Villanueva frames it as a community service in support of a police department hamstrung by city leaders.

“I’m not going to blame the LAPD whatsoever,” Villanueva said. “I think they can definitely do the job. They’re more than capable, have good leadership. However, if they’re hamstrung by politicians that don’t want them to do their job, well, then they’re left in a very, very bad situation.”

His department has done it before, stirring up controversy and mixed results by patrolling the Venice beach boardwalk in the summer.

“The presence of LASD in Venice is disruptive & counter-productive,” Councilman Mike Bonin said at the time. “Villanueva should leave outreach & housing to the professionals. It’s harmful to strut in & interfere with the work of service providers who are trying to house people, quietly, diligently, and in good faith.”

But the sheriff said the homelessness crisis within Los Angeles city limits prompted him to take action, and accused Bonin and Mayor Eric Garcetti of hampering the LAPD in its ability to do its job with regard to encampments.

Villanueva led a walking tour on the boardwalk with deputies, reaching out to some homeless individuals to gauge their interest in receiving government-provided housing. Officials later cleared out a major homeless encampment in the area.

“We’re gonna go invade the beach again Memorial Day all the way through Labor Day,” Villanueva told Fox11 on Saturday. “Just so we’re sending that message that it is safe to vacation here for local residents, it is safe for tourists to make this a destination.”

Like Hollywood, Venice falls within the jurisdiction of the Los Angeles Police Department.

Villanueva’s efforts in Venice drew criticism from some politicians and community organizations. A statement put out by a coalition of local advocacy groups said: “Time and time again, this approach has proven to fail in Los Angeles, and cause harm to people already dealing with crisis, trauma and the extreme lack of affordable housing across our region.” and especially on the Westside.”

Police efforts to clear homeless encampments in Los Angeles are fraught. Homeless advocates worry that the approach criminalizes homelessness and destabilizes a community left behind by the housing shortage and failed by social services. At the same time, people living in neighborhoods overrun by homeless tents worry about the encampment’s effect on their safety, quality of life, and home values.

Similar efforts to clear out homeless enclaves have had mixed results.

According to researchers, the whereabouts of 82 of the Echo Park Lake residents were unknown, six had died and Forty-eight people were still waiting for housing.

City News Service and Patch staffer contributed to this result.