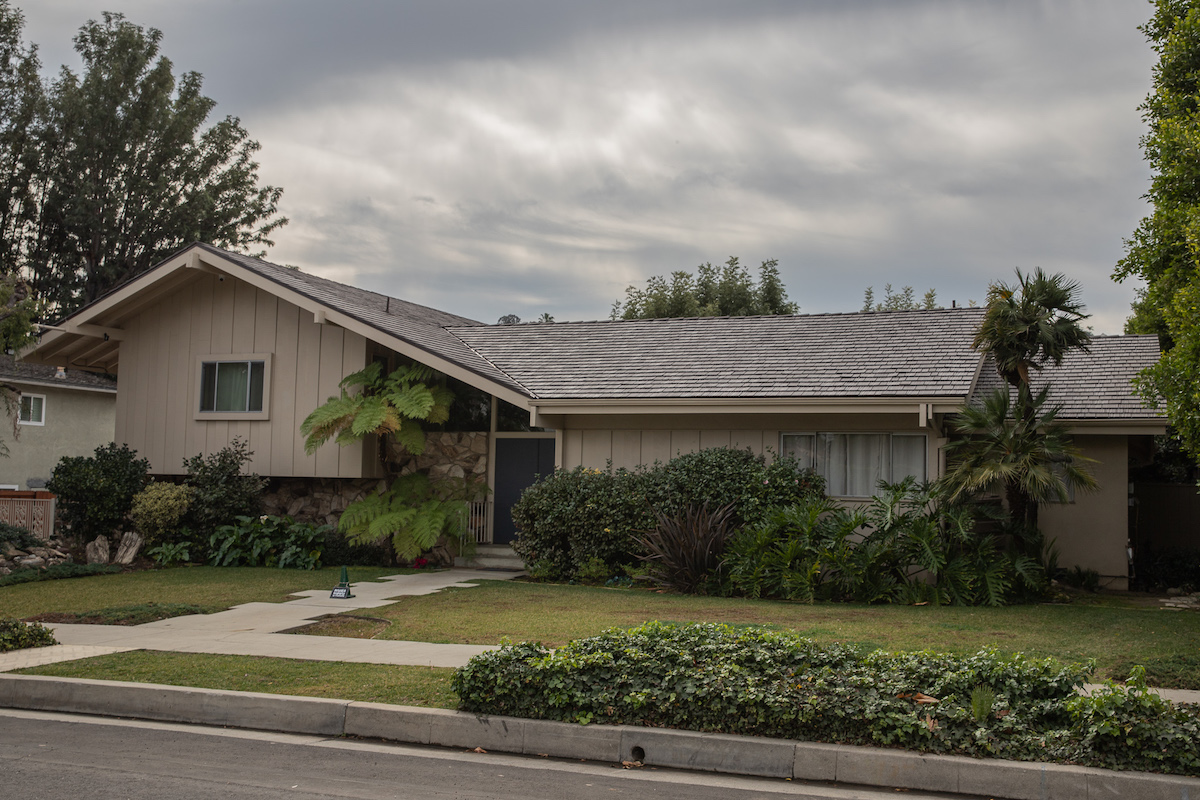 A tiny sign leans against a green cone that guards the front door of an unremarkable mid-century modern home. “Private Property. No Trespassing,” the warning says. The words are backed up by a patrol vehicle that straddles the curb and a security guard to drive it. Who, I wonder, is trying so hard to break into the Brady Bunch house?

I’m in Studio City, minutes after 8 am I’m parked on Dilling Street in a residential neighborhood just north of the Los Angeles River, about a five minute walk from the bustle of Ventura Boulevard. Front lawns are freshly manicured. Shady tree branches hang over the wide but not-too-wide streets. Parking is ample. People walk their dogs. I imagine the Brady family would be quite happy growing up in a place like this. For me, it’s just a starting point.

I head west. Three short blocks away, Dilling intersects with Tujunga, which is where I turn south. I amble along the overpass, lingering in the center to view the flow of water strapped in by the work of the US Army Corps of Engineers. Concrete straitjacket, indeed.

Up ahead is Ventura, which stretches about 17 miles from Lankershim in the east to its terminus at Valley Circle in Woodland Hills. I read somewhere that it’s the world’s longest avenue of contiguous businesses. Right now, traffic is thin. No work is being done except by the messages on the many billboards. They tell me to stream this or vote for that. If I’m ever in trouble I should definitely call Sweet James. Or is it Big Ben? I can never remember.

I move east at the stop light passing store fronts and strip malls. A man sitting in a car crammed full of earthly possessions notices me and gives me the finger as I fiddle with my camera. Don’t worry sir, I don’t want your picture and you won’t have to sign a release.

Eventually I get over to the Ralphs at Campo de Cahuenga where the outskirts are decorated by a Studio City welcome sign. It’s a bit of local boosterism that we know is important because two different associations are credited with its posting.

Like a great many parts of Los Angeles, this neighborhood earned its name by a desire from those who promoted it to make money. the idea of Studio City began as real estate development championed by movie mogul Mack Sennett, who relocated his production facilities from Edendale to the valley in 1927. Sennet, along with a syndicate of developers, hoped to draw other studios to the area, burgeoning the population and in turn the demand for new housing. Sennet’s dream did n’t quite work out, and the 20-acre lot that was his eventually became CBS Studio Center. Though the scheme fizzled, the name stuck.

I move away from the sign and cross Campo de Cahuenga then turn north, passing over the 101 on a sidewalk that banks around and lands on Lankershim Boulevard. As I walk the overpass I spy in the distance a minion peaking over a parking structure and the spiers of a colorful castle. I can almost smell the butter beer.

I get to Lankershim where I’m confronted by a sign Universal Studios so big I can almost feel it reaching into my pocket for my wallet. I cross back north at the intersection to arrive at the exterior of an adobe ranch house with a locked gate and a graffitied plaque.

Here, at Campo de Cahuenga in January of 1847, military commanders from opposing sides of the Mexican-American War signed a treaty effectively ending fighting within Alta California. The war at-large wouldn’t officially end until the Treaty of Guadelupe was signed more than a year later, but for some historians, this is the spot where California as we know it was born. I stare at the replica adobe, then glance back at the theme park signage across the street. How it started. How it’s going.

I head north past the Metro station and through an underpass that will return me to the south side of the 101. As I walk the tunnel I notice an advertisement, which is distinguishes itself in that it wants you to think of it as social commentary instead of commerce. “Stop Being Racist” the sign repeats over and over. This mantra flips my mind back to the abode.

California’s addition to the Union ushered in an era of renewed violence against indigenous peoples of the region. As the gold rush boomed the local economy, prospectors flooded in. Vigilantes took matters into their own hands. Government dollars Indian funded “removal.” UCLA history professor Benjamin Madley estimates that from 1846 to 1870, due to these efforts, California’s indigenous population shrunk from 150,000 to 30,000. That decimation, as Madley argues, was nothing short of a state-sponsored genocide. Stop Being Racist. Now the words are echoing in my head over and over. I wonder if we’ll ever get that right.

I continue to the intersection of where Cahuenga becomes Ventura. The beginning of the 17 miles of business. I peered at the hills above the Fat Burger and the liquor store and the Subway sandwich shop, recalling a couch I once surfed in this neighborhood after I first moved to Los Angeles.

The paper thin glass of that house were crap for insulation, but the view of Universal City and the freeway was something to behold. I think of that view and it’s a reminder of who I was and who I thought I’d become. Thinking about that gap prompts a question: Did I make it or did I fail? How do you even answer a question like that?

The return trip is a beeline down Ventura then a right on Vineland to take me back north over the river. Along the way I pass a boutique hotel that sits opposite a Metro parking lot taken over by tents of the unhoused. A construction crew jack hammers away near the Mobil gas station. Traffic squawks and buzzes. Now this is LA

I turn left on Aqua Vista to get back into the thicket of residential homes and apartment buildings, then swing south on Fair Ave as it curves to the right to become Dilling. I get one more glimpse of the river through a chain link fence marked by warnings against trespassing and loitering.

Finally I’m back at the Brady home. This isn’t really where they shot the series, I think to myself. In fact, as one blogger so diligently mapped out, the differences between the interior of the Dilling Street house and the television depiction are many. But this shouldn’t come as a surprise. What is Los Angeles, after all, if not a façade? The clash between reality and unreality. A place where you can walk almost anywhere, and encounter limitless contradiction.