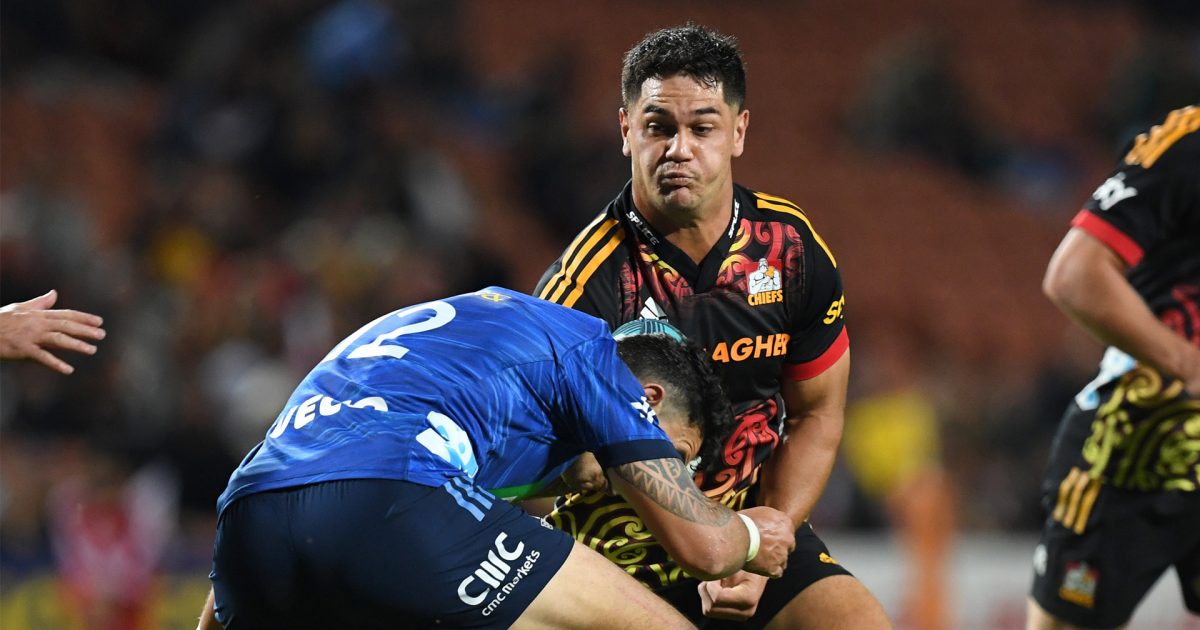 All Blacks midfielder Quinn Tupaea was a surprising pick at left wing for the Chiefs in last Friday’s win over the Waratahs. However, with so many injured full-backs in the squad, it was a case of ‘absolute necessity’ according to the head coach.

“He is a midfielder; he is an All Blacks 12,” Clayton McMillan said after the match. “So we want him to go back there, we just didn’t have any cattle this week.

“We have four, five of our outside runners disabled or just couldn’t make the trip. We’ll check the bodies tonight and tomorrow and see where we land. We only have a team of 27 here, so it doesn’t leave us much room to breathe.”

Full-backs Shaun Stevenson, Emoni Narawa, Etene Nanai-Seturo, Kaleb Trask and Josh Ioane were all on the injured list heading into the match. While Alex Nankivell had featured on both wings earlier in the season, McMillan opted to use Nankivell at outside center and Rameka Poihipi was given the number 12 jersey for the match, forcing Tupaea to move down the left flank.

With Poihipi and Tupaea both second-five-eighth specialists, moving Tupaea to the wing probably created the least disruption for the team and meant only one player had to appear out of position.

Out of position or not, however, Tupaea had a killer game in the number 11 jersey, amassing two attempts and 94 meters with the ball in hand. Come the end of the game, Tupaea was named man of the match.

Yet despite his impressive performance at left wing, former All Black James Parsons has quashed any suggestion that the 22-year-old should look to rack up minutes in that role to increase his value to national selectors.

While the All Blacks drafted several squad members last year who were capable of playing more than one position, that rarely happened, with players generally spending the entirety of the campaign specializing in one role. In fact, Luke Jacobson, Ardie Savea, Rieko Ioane and Damian McKenzie were the only players to appear in multiple positions (excluding locks, flankers and wingers who were worn on both jerseys within their positions).

“I think we have to be careful,” Parsons said on the latest episode of the show. Aotearoa rugby capsule. “We’ve seen it during the last kind of end-of-the-year tour. [The All Blacks selected] specialist boys [to] focus on that one position.

“They have the ability [to cover multiple positions] – as we’ve seen with Nankivell and now with Quinn Tupaea – but I think he just needs to push himself early in his international career, just focus on that role of 12, potentially 13, to do really well.”

“Look, if there’s a drastic number of injuries and he has to slide in there, then yes, but I don’t think it would cross the selectors’ minds to put him on the sideline. As we’ve seen, it’s quite difficult to pick the team based on the bottom three at the moment, so I don’t know if it’s still up to that combination.”

Tupaea is still in his third season with the Chiefs (ironically, he was named outside back in 2020 despite not playing any games at full-back) and despite taking the step to try rugby last season, he remains a work in progress. .

On the other wing for the Chiefs on Friday night, Jonah Lowe was also in brilliant form, scoring four attempts. Parsons’ co-panelist on the show, Crusaders midfielder Bryn Hall, said that while that kind of impact will always attract the attention of national selectors, Lowe will need to string together some consistent performances before he can alter the bandwagon. apples.

“You look at the likes of Leicester Fainga’anuku… This is his second year that he’s been playing those kinds of performances as [Lowe] have had over the weekend. But he is still young. I can imagine that there are still things that he wants to work on in his game, but every time you can score four tries, the selectors take a look.”

“I think Jonah has actually been playing really well in terms of offense and D,” Parsons added, “but I guess the one area we know [you are tested] internationally it would be that passing game and being able to win those aerial battles, whether it’s from an opposition challenger or if you chase down a challenger. If we can see more of that in his game, I think he will become a real option.”

Lowe, despite being arguably the Chiefs’ best winger the past two seasons, has struggled with injuries, limiting him to eight appearances in 2021 and just five so far this season. While he’s likely to stay on the sidelines in the Chiefs’ next game with the Reds, Tupaea will likely find himself back in midfield unless the team’s other outside running backs remain delinquents.