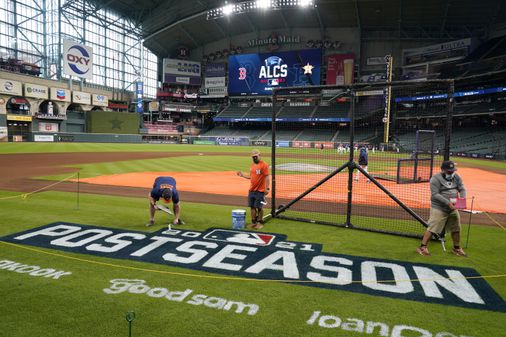 Read on for each writer’s analysis.

AL East: Blue Jays. This division will be a rock fight, with four teams capable of winning. Toronto is finally home for a full season and has a deep lineup.

AL Center: White Sox. Tony La Russa said last summer that his team would be better this season. We’re holding him to that.

AL West: Stars. The West is better, but no team looks good enough to stop Houston from repeating as champion even without Carlos Correa.

AL wild cards: Twins, Red Sox, Yankees. There could be five or six teams in the mix on Labor Day. Can’t help but wonder whether anti-vax players will doom Sox and Yankees.

Get 108 StitchesAn email newsletter about everything baseball from the Globe’s Red Sox reporters, in your inbox weekly (and when news breaks) during the offseason.

FTAS: Blue Jays over White Sox. This would be a fun series given all the young talent on both sides. Two very hungry fanbases, too.

NL East: Mets. Steve Cohen is trying to buy a division title. Don’t bet against him — or Buck Showalter.

Central NL: Brewers. Milwaukee has averaged 93.3 wins over the last three full seasons. The pitching will lead to more success.

NL West: Dodgers. They really didn’t need Freddie Freeman to play first base. But 103 wins is better than 100.

NL wild cards: Braves, Cardinals, Giants. The Braves and Giants made some smart moves over the offseason. The Cardinals believe in new manager Oli Marmol.

NLCS: Dodgers over Mets. This will be like a baseball-themed episode of “Billions.”

WorldSeries: Dodgers over Blue Jays. Dave Roberts has guaranteed a championship, which was a bold move. But he has the roster to back it up.

AL East: Blue Jays. The mashing offense gets the attention, but Berríos/Manoah will form a superb tandem at the front of the rotation.

AL West: Stars. One to watch: University of Maine alum Jeremy Peña, who steps in for Carlos Correa at shortstop.

NL West: Dodgers. With the addition of Freddie Freeman, their lineup has more stars than the Walk of Fame.

AL East: Blue Jays. Toronto led the majors in home runs and OPS last season. Now, it has the starting pitch to go with that pop.

AL West: Stars. Death, taxes, and the Astros in October. All things we dread. Make it six straight postseasons for the Team We Love To Hate.

FTAS: Rays over White Sox. Unlike Billy Beane and Moneyball, the Rays’, uh, stuff works in the postseason.

Central NL: Brewers. Catch up to them if you can. Milwaukee pitchers led the majors in strikeouts last season.

NL West: Dodgers. Red Sox fans look longingly 3,000 miles west to what they should be.

AL East: rays. Everyone seems to have hopped on the Blue Jays hype train, but the Rays remain one of the most consistent teams in baseball and thrive during the regular season.

AL Center: White Sox. The Twins upgraded, but the White Sox have more of a balanced structure, particularly when it comes to offense and pitching.

AL wild cards: Blue Jays, Yankees, Twins. Toronto has a young, powerful lineup and the pitching to back it up. Yankees have Luis Severino coming back from injury. Pitching is an issue for Twins.

FTAS: Blue Jays over Rays. Stars win playoff series. The Blue Jays have enough star power to win this one.

NL East: braves. They have the swagger of a champion and will be getting Ronald Acuña back at some point.

Central NL: Cardinals. They remain one of the best all-around franchises and will take care of business in their division ahead of the Brewers.

NL wild cards: Brewers, Giants, Mets. Max Scherzer paired with Jacob deGrom could power the Mets if both can stay healthy down the stretch.

NLCS: Braves over Dodgers. While the Dodgers have the offense, they lack pitching. The Braves should be the team to beat.

WorldSeries: Blue Jays over Braves. This will be a balanced series, but the Blue Jays’ potent offense will crown them World Series champions.

AL Center: White Sox. Tony LaRussa Manager of the Year. And yes, they think they got the better of the Chris Sale trade.

AL West: Stars. Everybody still hates them, but they are on the level this year.

WorldSeries: Dodgers over Blue Jays. David Price finally wins the World Series MVP he should have been awarded in 2018.

AL East: Blue Jays. With Canada’s vaccination requirements, they may have the biggest home-field advantage in the history of the sport.

AL Center: White Sox. The success of their season is now defined by whether they can take the next step in October.

AL West: Mariners. It seems foolish to suggest anyone but the Astros, but perhaps a bit dull to stick with Houston.

AL wild cards: Astros, Angels, Rays. October without the Red Sox or Yankees for the first time since 2014? They’re certainly talented enough to reach the playoffs, but the AL East seems like the Group of Death.

FTAS: White Sox over Blue Jays. Bo Jackson will come out of retirement in search of revenge in the rematch of the only postseason series of his career.

NL East: braves. This time, Atlanta won’t be sneaking into the postseason.

Central NL: Brewers. Hunter Renfroe will hit a walkoff in the clincher, then immediately be traded.

NL West: Dodgers. They’re entering Year 6 of arguably the most dominant run in NL history, yet somehow feel like a disappointment with “just” one ring to show for it.

NL wild cards: Giants, Mets, Padres. If the Mets are outside the playoff picture at the deadline, Steve Cohen may simply buy the other wild-card contenders to ensure October baseball.

NLCS: Dodgers over Giants. Quite possibly the best rivalry in the sport right now.

WorldSeries: Dodgers over White Sox. LA closer Craig Kimbrel will retire AJ Pollock, the man for whom he was traded, for the final out of Game 7, as Bo Jackson shakes his head in the on-deck circle.

AL East: Blue Jays. The spending spree pays off and they avenge the disappointment of winning 90 and going home last year.

AL Center: Twins. The addition of Carlos Correa shakes up a division and pays off on the field and in the locker room.

FTAS: Astros over Twins. The run isn’t over yet, and the Astros keep trying to erase the stain of their cheating scandal.

Central NL: Cardinals. The seesaw between St. Louis and Milwaukee will last all season, and the coin toss here goes to the Cards.

NL West: Dodgers. The best team in baseball got even better when it added stud World Series champ Freddie Freeman. Good luck to the rest of ’em.

NLCS: Dodgers over Phillies. The Dodgers are the absolute, overwhelming, undeniable, heavy, heavy favorites to win it all.