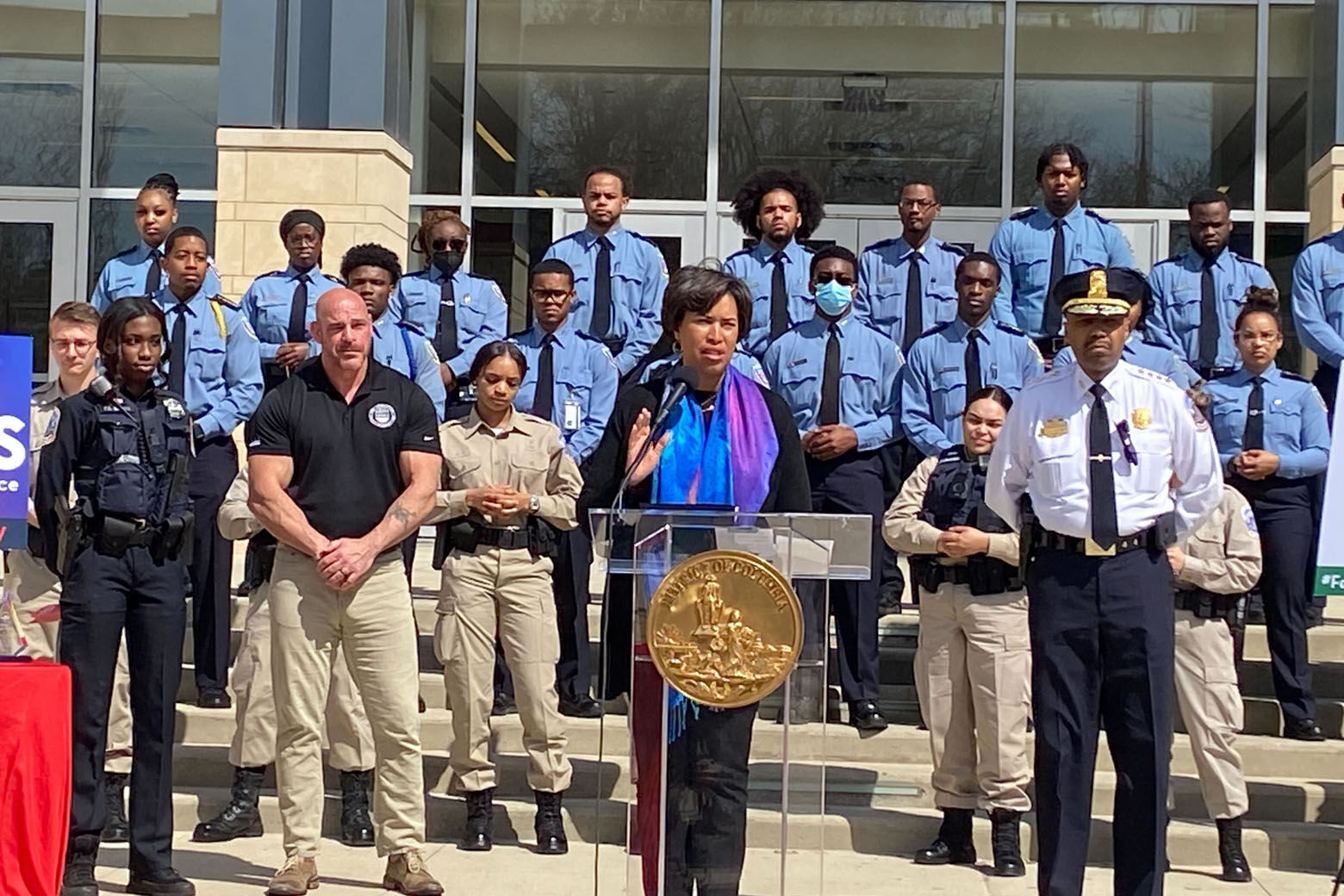 DC Mayor Muriel Bowser says a $30 million budget proposal to eventually hire 4,000 police officers for the District is necessary to improve 911 response times and increase the presence of officers in neighborhoods across the city.

DC Mayor Muriel Bowser says a $30 million budget proposal to eventually hire 4,000 police officers for the District is necessary to improve 911 response times and increase the presence of officers in neighborhoods across the city.

The department’s current staffing level — about 3,500 sworn officers — is at its lowest level in two decades.

“It is critical that we close the gap between 3,500 and put ourselves on a path to 4,000 officers,” Bowser said at a news conference Monday outside Dunbar High School in Northwest DC to promote her budget proposal.

Bowser said that goal is also aimed at ensuring officers can close high-profile cases and respond to an uptick in protests and demonstrations that have snarled DC streets.

In the short term, the proposed budget calls for hiring 347 officers in the next year and aiming to retain as many as possible of the 300 officers typically lost each year to attrition.

The total $30 million package includes a panoply of incentives, including hiring bonuses for new recruits and graduates of the cadet program and an option for officers to take home their police vehicles.

“I don’t want people to get lost in this number 4,000,” Bowser said Monday. “Focus on 347 — because that’s what this budget proposes that we hire in the upcoming year. Focus on keeping 300, because that’s the number that we might lose if we don’t have some aggressive retention strategies. And that’s how we get to the number of officers that we need.”

As the police force has declined in recent years, it’s taking longer for officers to respond to incidents, even serious ones. Police Chief Robert Contee told DC Council members last week that police response times in the past few years have increased by 90 seconds.

“We’ve seen those times creeping up over the past several years … and that’s unacceptable,” Bowser said.

“Just the other day I was walking on Kennedy Street, and a number of residents told me, ‘Mayor Bowser, you had a car posted here, and we noticed and we felt safer when that car was there. But it hasn’t been there in a few weeks.’ … That presence not only makes people feel better. It actually drives down crime on corridors like Kennedy Street,” Bowser said.

She said a staffer in her office recently bought a home in Columbia Heights, which has seen several incidents of gunfire over the past several months.

“She told me, ‘Mayor, you know, actually I feel a little scared sometimes, but I feel better when I see a police car parked by the Metro,’” Bowser said.

Plans to increase the police force come nearly two years after a nationwide reckoning on police and race following the killing of George Floyd in Minneapolis, which led to a summer of racial justice protests in DC

More recently, violent crime in DC has been on an upswing. The District ended 2021 with the most homicides in nearly 20 years.

“I think the community has always wanted to make sure that we had fully funded MPD,” Bowser said in response to a reporter’s question about shifting public sentiment. “I don’t think that’s changed. What has changed, however, is we’ve gone down from over 3,800 officers to just over 3,500 officers and we’ve seen that our response times tick up. You just can’t argue with the math.”

The $30 million proposal, which requires approval from the 13-member DC Council, includes a $20,000 signing bonus for new recruits, tuition reimbursement and $6,000 in rental assistance.

“We’re in competition with every police department that’s within 100 miles of the District of Columbia,” Contee said Monday. “That’s real; that’s fact. If MPD is going to stand out, we have to do things that are different from what we’ve done before to attract people.”

Bowser called on the council to approve the full proposal.

She added later, “If I don’t have this funding, we can go down to 3,200 police officers and we’re going to have increased response times and more crime. That’s what I’m telling you.”

At an earlier news conference, DC Council Chairman Phil Mendelson said he supported the mayor’s proposal as “fair” and “not obnoxious,” but called the focus on reaching 4,000 officers a “distraction,” since the proposal would result in a net gain of fewer than 50 officers next year when taking attrition into account.

Bowser and Contee were joined at their news conference by dozens of members of the MPD Cadet program.